by David Grant
Marks & Clerk
Your LinkedIn Connections
with the authors

In Europe, inventions that utilise distributed ledger technology will generally fall under the heading of "computer-implemented inventions (CIIs)." The EPO has an established body of case law for assessing the patentability of CIIS. When doing so, the EPO follows a two-step process, which can be understood with reference to the flow diagram below. 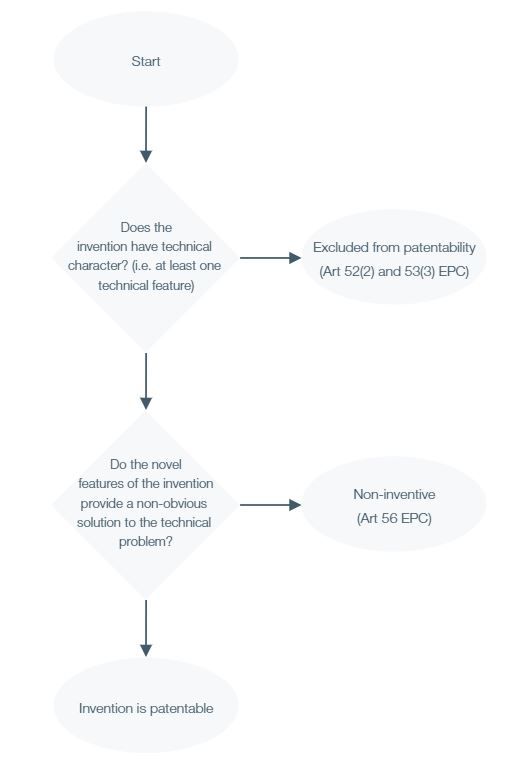 The first step in the process is to consider whether the claimed invention has technical character i.e. do the claims include any technical components, or is the invention solely an administrative or business process? In the absence of any technical features in the claims, the invention will be deemed to be excluded from patentability. Since any invention that makes use of a distributed ledger will, by its nature, utilise a computer or computer network, this hurdle can be overcome quite simply by making reference to this hardware in the claim, or in the case of a method, defining the method as a "computer-implemented" method.

Assuming that the claim defines at least one technical feature, the next step is to identify the novel features of the claim, and to assess whether or not those novel features together contribute to solving a technical problem, in a manner that is non-obvious from the prior art. This step may itself be broken down into several stages.

First, the Examiner will identify the "closest prior art" i.e. a single public disclosure that constitutes the most promising starting point for a development leading to the invention. The Examiner will then identify each difference between the invention and that prior disclosure, and consider which of those differences are technical in nature and which pertain to non-technical aspects such as business or administrative steps. The features that are identified as being both novel and technical in nature will then be used to determine the technical effect provided by the invention, and in turn formulate a technical problem that is solved by the invention. The final step is then to consider if the specific solution provided by the invention is one that would be obvious for a person of ordinary skill in the art to implement, based on what was known at the time the application was filed at the patent office.

For inventions that lie in the field of distributed ledger technology, the step of persuading the Examiner that the invention solves a technical problem – as opposed to an administrative or business-related problem – will often be critical. Therefore, when looking to pursue patent protection for inventions in this field, it is important to identify any specific technical advantages afforded by the invention, and to ensure the application is framed with these in mind.

What constitutes a technical problem for a DLT?

To understand what might constitute a technical effect in this field, it is helpful to class inventions into two categories. The first category includes inventions that enhance the underlying network and/or the way in which nodes in the network interact or communicate with one another. These might include protocols that help to circulate information more efficiently across the network, allowing nodes to update their copies of the ledger with new transactions as quickly as possible. Other inventions might help to reduce the overall energy required to record transactions in the ledger. Many distributed ledgers, for example, rely on the proof of work consensus algorithm for validating transactions; modifying the consensus algorithm or replacing it with a novel, more energy conservative algorithm, can be seen to provide a solution to the technical problem of reducing energy usage. Inventions in this first class of invention might generally be recognised as "application agnostic", in the sense that the function of the network / ledger is improved, regardless of any particular application that the distributed ledger is intended to be used for, be it storing of energy readings, health information, or facilitating payments or exchange of assets etc.

The second class of inventions will include those where a new use-case is proposed for a conventional distributed ledger platform. Examples might be where a DLT platform that had previously been used to effect payments in cryptocurrency is now used to record the transfer of a different type of asset. An invention could be born of the realisation that records stored in the ledger provide an effective means for supply chain monitoring, and not only financial transactions, for example.

The second class of inventions can sometimes pose more of a challenge for persuading the EPO that the invention solves a technical problem. Depending on the particular use-case, the EPO may view the core invention as being, at heart, an administrative or business process, rather than a technical one. For example, an application that suggested storing electrical meter readings from multiple users in a distributed ledger and using those readings to generate invoices for people's energy usage might face an inventive step objection, on the grounds that the invention is directed towards solving a business-related problem, rather than a technical one. Whilst the use of the distributed ledger would satisfy the requirement for a technical means, using the information stored in that ledger to calculate an amount to invoice a customer would not be deemed to solve a technical problem.

In practice, many inventions will have include elements from both categories above. A novel use-case for a distributed ledger may still require certain modifications be made to the underlying platform in order that the platform may then achieve the necessary functionality. As an example, using a conventional DLT platform to store and share a patient's healthcare data might not, by itself, be considered as solving a technical problem. However, by introducing additional functionality using smart contracts to identify attempts by unauthorised parties to access that data and alert the patient accordingly, a genuine technical contribution could be realised. Similarly, whilst inventions in the field of cryptocurrencies may, prima-facie, be concerned with business and financial aspects, a closer inspection may reveal a number of technical means for improving the scalability and throughput of transactions, as well as the security associated with those transactions and protection from malicious attacks. Such means, if captured properly in the patent application, can provide a strong basis for arguing the presence of a technical effect.

A key takeaway from this discussion is that when looking to patent an invention in this field, it is important to consider which aspects of the invention can be identified as solving a technical problem, and to frame the invention accordingly. Our experts are well placed to advise on which aspects are most likely to satisfy this requirement, and prepare the application accordingly, ensuring the best chance of a successful outcome at the patent office.

ARTICLE TAGS
UK Intellectual Property Patent Technology Fin Tech
POPULAR ARTICLES ON: Intellectual Property from UK
Court Of Appeal Finds That Advertisements On Amazon.com Targeted UK And EU Consumers
Brown Rudnick LLP
The Court of Appeal in Lifestyle Equities CV and another v Amazon UK Services Limited and others [2022] EWCA Civ 552 has ruled that various Amazon entities "Amazon" or the "Defendants")...
Art Contest Won By AI Generated Image
Marks & Clerk
Aritifical intelligence image generators such as DALL-E 2 and NightCafe have become synonymous with questions of copyright, and a growing fear that this generated art could replace the work of humans.
European Software Patentability: The Lovable Constant
Kilburn & Strode
We're taking you on a journey through the history of software patents in Europe, through the lens of pop culture. By zooming out and looking at the...
European Patent Office Publishes Landmark Report Into Global Innovation Trends In Plastics
Maucher Jenkins
The report highlights some startling statistics on the plastics industry generally, including its history.
Same, Same But Different – Revocation At The EPO And UPC
J A Kemp LLP
The opposition procedure before the European Patent Office (EPO) has been a highly attractive forum for challenging patents since the first European patents were granted.
Foreign Video-Hosting Website Can't Escape Long Arm Of The Law
McDermott Will & Emery
Focusing on the first prong of the minimum contacts test (whether the foreign defendant purposefully directed its activities at the United States) the US Court of Appeals for the Ninth Circuit reversed a district court holding ...
FREE News Alerts
Sign Up for our free News Alerts - All the latest articles on your chosen topics condensed into a free bi-weekly email.
Register For News Alerts
Article Tags
UK Intellectual Property Patent Technology Fin Tech
Similar Articles
Powered by mondaq AI
MATCH
75%
Drafting Materials Related Applications Involving AI: Considerations For Success At The EPO Haseltine Lake Kempner LLP
63%
European Software Patentability: The Big Split Kilburn & Strode
69%
Review Of EPO Software Decisions In 2020 J A Kemp LLP
68%
Review Of Software Patent Appeals At The EPO 2018 J A Kemp LLP
67%
Review Of EPO Board Of Appeal Decisions In 2017 Relating To Software Inventions J A Kemp LLP
Related Articles
Opting Out Of The Unified Patent Court J A Kemp LLP
UKIPO Issues Guidance On The Patentability Of AI Inventions Marks & Clerk
Fresh Guidance On AI Patents From UK IPO Potter Clarkson
UK Design Framework Consultation: An Analysis Of The Responses Potter Clarkson
Magic Disclosure: How To Make Prior Art Disappear Haseltine Lake Kempner LLP
Mondaq Webinars
Employer Responsibilities and Employee Rights in Australia
People + Culture Strategies
Future Series: Managing the Risks of ESG Reporting and Compliance for In-House Counsel and Executives
Bennett Jones LLP
More Webinars
Comparative Guides
Anti-Corruption & Bribery
Artificial Intelligence
Banking Regulation
Blockchain
Cartels
More Guides
Mondaq Advice Centres
UK
Coming to and Investing in the UK
Global
Trademarks in SAARC Countries
More MACs