by Khizar Arif
Giambrone & Partners
Your LinkedIn Connections
with the authors

Currently, social media such as Twitter, Facebook, and Instagram are powerful online platforms where anyone can 'tweet', 'post', 'share' any kind of material. The platforms are largely self-governing, having initially taken the view that they had no responsibility for the nature of the posts their users chose to post. However, somewhat reluctantly social media platforms have introduced Codes of Conduct to limit the comments that those posting can make, with the ultimate sanction of withdrawing their account. However, blog posts, online comments or tweets, and even Google reviews can also become very dangerous for someone's reputation and lead to irreparable consequences.

Khizar Arif, a partner, commented "the law of defamation protects a person's reputation against unjustified interference. Defamation is the oral or written communication of an untrue statement to one or more third parties which causes or is likely to cause significant damage to a person's or an organisation's reputation. Internet defamation refers to defamation in an online context. Publication means that the defamatory statement is communicated to at least another person. Finally, it is important to prove serious harm to reputation, generally showing some financial loss, distress or humiliation."

This is visibly demonstrated by the recently concluded vitriolic Instagram libel case between Rebekah Vardy v Colleen Rooney, dubbed by the media as the 'Wagatha Christie' case. The dispute between the British footballers' wives Coleen Rooney and Rebekah Vardy resulted in Rebekah Vardy deciding to sue Ms. Rooney, believing she had been defamed by Coleen Rooney due to the suggestion that she (Ms. Vardy) had leaked personal information about Ms. Rooney and her family from a Twitter account that Ms. Rooney set up to try and establish who was leaking stories to the press. The case against Ms. Rooney rapidly began to weaken and eventually, Ms. Vardy was found to have been the source of the leaks as Ms. Rooney suggested.

Similarly, the even more sensational case involving Johnny Depp v Amber Heard, which hinged on the publication and re-publication of an article where Amber Heard suggested she was a victim of domestic violence without naming her alleged abuser. Johnny Depp suffered considerable financial loss due to his former wife's allegations that were found to be baseless.

Sharing of sensational information or allegations without any fact-checking on social media can attract huge attention and can be re-shared quickly by an enormous number of users and become "viral". The more readers the potentially defamatory post has, the greater the likelihood of reputational damage.

Another example of social media defamation is the 2017 Monroe v Hopkins case where the former Daily Mail online columnist Katie Hopkins made two tweets saying that the food writer Jack Monroe excused an act of vandalism on a war memorial. The tweets were considered defamatory and Monroe was awarded £24,000 in damages.

There are two types of defamation, libel and slander. Libel is in written form – online examples of this are emails, defamatory comments on websites, review sites such as Trust Pilot and social media. Slander is defamation in oral form, a spoken comment, such as malicious gossip or as part of a statement made in public.

Anonymity bolsters the confidence of the person writing the offensive post and it is common to find that the offensive post online is written under an alias. However, in this case intermediaries such as Facebook etc. can be requested to remove the content by way of a Norwich Pharmacal Order ("NPO") (so called to reflect the first case in 1974). A NPO is a disclosure order which compels third parties, such as social media platforms, who have been drawn into wrongdoings, to provide information to help victims to pursue their often anonymous persecutor and recover their losses.

Clearly, the author of the libelous post, blog, comment etc. is primarily responsible but others such as hosts, internet services providers or search engines can be potentially involved. The courts can decide whether the host internet service provider falls into the category of publisher, by considering the circumstances and the way the host operates.

Because of the widespread use of social media channels and online platforms online defamation is becoming an increasing concern among individuals. A solid reliable reputation can be lost because of a simple post online on Twitter, Instagram, Facebook can destroy it in a matter of seconds. It is imperative to act swiftly if you believe you have been defamed to achieve an immediate removal of the offending content as well as obtaining an apology or a clarification. Substantial monetary damages or other form of compensation can also be awarded for the harm suffered.

Khizar was called to the Bar of England & Wales initially in 2001. Khizar was subsequently admitted to the Roll of Solicitors, attaining Higher Rights of Audience shortly thereafter. He holds a Master of Laws degree (LL.M.) focused on international business and maritime law from the University of Hamburg, Germany. Khizar is a member of the Solicitors' Association of Higher Court Advocates, the London Shipping Law Centre and the Deutscher Verein für Internationales Seerecht. 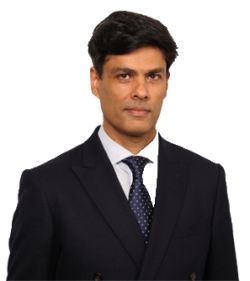 He has a distinguished reputation for resolving complex cross-border commercial matters. Khizar always attempts to conclude a dispute by alternative dispute resolution, without resorting to litigation, where possible. However, he is a robust tenacious litigator when required.

Khizar's expertise extends across a range of commercial matters, both contentious and non-contentious, including contractual disputes, share purchase agreements, data protection, intellectual property and employment law. In addition to a wide range of commercial clients Khizar has represented various a variety of high profile clients including high-ranking public individuals, publishers, newspapers, broadcasters and charities and their directors, officers or trustees.

He also leads the shipping and maritime department and has extensive knowledge of this sector. Khizar advises on a wide range of maritime disputes as well as commercial contracts, bills of lading, waybills and charterparties.