Germany has a bifurcated patent litigation system wherein the issues of patent validity and patent infringement are dealt with in separate courts. 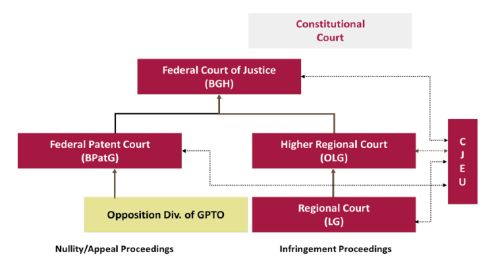 Challenging the validity of a patent

After expiry of the nine-month period for filing an opposition, the validity of a patent may be challenged by filing a nullity action.

Nullity actions are dealt with by the Federal Patent Court (Bundespatentgericht; BPatG)1 in the first instance, where the case is heard by two legally qualified and three technically qualified judges. The duration of first instance proceedings is approximately 25 months.

First instance decisions may be appealed at the Federal Court of Justice (Bundesgerichtshof, BGH) in the second instance, where a specialised panel of five legally trained judges decides the case. The duration of second instance proceedings is approximately 2 to 3 years.

Prior warning: A cease and desist letter may be served by the patentee to the alleged infringing party requesting them to refrain from committing patent infringements in the future and to make a legally binding declaration to that effect. If the patentee files a patent infringement suit without serving a cease and desist letter, they may risk bearing all costs of the suit. This would occur if the infringer files a sufficient cease and desist declaration of their own accord or acknowledges the claim before the court immediately after initiation of the infringement proceedings.

In Germany preliminary injunctions are granted at a rate of about 75 to 77% of all applications filed.

In the bifurcated system, where validity and infringement are dealt with in two different courts, the validity of a patent is not assessed during infringement proceedings. Under this system, it could be that a judgment in an infringement case is handed down before the nullity proceedings are completed. In order to avoid this happening, a stay of proceeding in the infringement case based on an ongoing nullity action may be requested.

In general, a stay of infringement proceedings are only granted when there is a good chance that the nullity action will succeed. This may be assessed, for example, by consulting the preliminary opinion issued by the nullity court.

Enforcement of the decision handed down by the regional courts

Court decisions which have become final can be enforced by the winning party, i.e. the losing party can be called upon to comply with the operative part of the decision with immediate effect and to perform any actions laid down in the decision (e.g. to provide information or to destroy goods).

In cases where a legal remedy such as an appeal at the Higher Regional Court or the Federal Court of Justice is still available, the court's decision is not yet final. Such a non-final decision may be enforced provisionally in return for the furnishing of a security deposit. The amount of the security to be furnished is fixed by the court and is usually based on the disputed amount and is usually around 120% of the disputed amount.

The provisional enforcement of the decision may be declined at the request of the losing party, e.g. in cases when the provisional decision could cause irreparable losses.

The losing party must reimburse certain costs to the winning party. The amount of the statutory court and attorney's fees to be reimbursed is calculated according to a guidelines laid down by statute. In general, the statutory attorney fees do not cover all actual attorney costs.

The cost risk of an unsuccessful party includes all of its own attorney costs, the potentially reimbursable costs of the adversary and the court fees.

The reimbursable costs in both nullity cases and infringement cases depend on the disputed amount. In a typical patent case the disputed value may range from €500,000 - €5,000,000.

The cost risk for the second instance is usually about 30% higher than for the first instance.

1 Every year, around 250 nullity cases are settled at the BPatG. A patent is either completely revoked or its scope is narrowed in around 40% of the cases.

2 Mannheim tends to be on the faster side of about 9 months, whereas Munich and Düsseldorf take in the region of 15 months.

4 The share of party's own attorney costs which exceeds the statutory attorney fees is also to be added to the cost risk.

5 Statutory attorney fees in infringement proceed are usually twice as high as in nullity proceedings due to the additional requirement of an attorney-at-law.

ARTICLE TAGS
UK Intellectual Property Patent
POPULAR ARTICLES ON: Intellectual Property from UK
Artificial Intelligence: Can A Machine Be An Inventor?
Keltie
Computers, and the functionality they provide, permeate every part of modern life.
Tarilian Laser Technologies – A Case Study In Due Diligence
HGF Ltd
When deciding whether to invest in a company, an investor will inevitably have to decide the value of the company.
EPO Launches Consultation On Grace Periods
J A Kemp LLP
The EPO has launched a user consultation into the desirability of introducing a "grace period" into the European patent system.
When Does A Disclosure Invalidate A Patent?
Albright IP
This brief article explains why and when a public disclosure invalidates a patent.
The European Unitary Patent And Unified Patent Court – January 2022 Update
Haseltine Lake Kempner LLP
After years of delay caused by legal challenges in Germany to ratification of the Agreement on a Unified Patent Court (also known as the "UPC Agreement" or "UPCA")...
By Design: Update On Registered Design Filing At The UK IPO
Haseltine Lake Kempner LLP
Following a referendum in the UK in 2016, the UK's official membership of the European Union ended in January 2020...
FREE News Alerts
Sign Up for our free News Alerts - All the latest articles on your chosen topics condensed into a free bi-weekly email.
Register For News Alerts
Article Tags
UK Intellectual Property Patent
Related Articles
Hip Hop & IP- Two Of My Favourite Subjects Marks & Clerk
Sustainable Polymers: Finding The Sweet Spot Marks & Clerk
As AI Powers More And More Medical Technology Don't Overlook Patenting Marks & Clerk
The Unitary Patent And Unified Patent Court Move Forward J A Kemp LLP
Insufficient Evidence To Support Change To UK Exhaustion Regime J A Kemp LLP
Mondaq Webinars
UK Construction Law Update: What happened in 2021? What can we expect in 2022?
Charles Russell Speechlys LLP
Webinar London UK
New Legislation Paves the Way for the Future of Aviation
HarleyJames Law
Webinar Nassau Bahamas
More Webinars
Comparative Guides
Anti-Corruption & Bribery
Artificial Intelligence
Banking Regulation
Blockchain
Cartels
More Guides
Mondaq Advice Centres
UK
Coming to and Investing in the UK
Global
Trademarks in SAARC Countries
More MACs