The number of divorce applications filed in the month of March is 21% higher than January, dispelling the belief that January is peak divorce month*, says Boodle Hatfield, the leading private wealth law firm.

January has often been cited in the media as being the busiest month for divorce lawyers, due in part to New Year's resolutions to end unhappy marriages and warring spouses rushing to file after spending one last Christmas together for the family's sake. In fact, January has the second lowest number of petitions filed (182,080) after December (147,706).

Emily Brand, Partner of the Family Law team at Boodle Hatfield says: "The much-peddled theory of January being the most common month for divorces is a myth."

"It's true that January can be a difficult month for couples who aren't getting along well. Pressures around the Christmas holidays can lead to heightened tensions but this doesn't necessarily lead to spouses filing for divorce immediately."

"The most popular months for divorce align with school term times. This could be largely due to parents wanting their separation to have as little impact on their children as possible and to ensure that any calls with their lawyers and paperwork are carried out discreetly while the children are safely at school".

*Ministry of Justice, Number of divorce petitions filed in England and Wales, 2003-2020.

Divorce applications peak in the month of March* 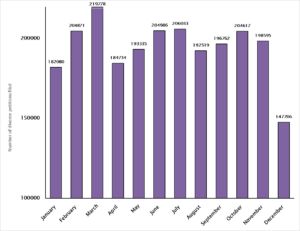 ARTICLE TAGS
UK Family and Matrimonial Divorce Family Law
POPULAR ARTICLES ON: Family and Matrimonial from UK
I Am Divorcing A Narcissist
BLM
Narcissistic Personality Disorder is a mental condition in which people have an inflated sense of their own importance, a deep need for excessive attention and admiration...
Interpretation Of Wills – Where An English Will Covers Jersey Assets
Walkers
In an interesting recent English Court of Appeal decision, Partington v Rossiter [2021] EWCA Civ 1564, the Court determined that where an English will was expressed...
How Covid-19 Has Created Fertile Ground For Predatory Marriages: What This Means For Succession And Some Possible Solutions
Russell-Cooke Solicitors
As reflected in recent news coverage, predatory marriages are on the increase, particularly following the restrictions imposed for Covid-19.
Witnessing Wills In The Coronavirus Pandemic
Wrigleys Solicitors
For a Will to be valid, it must be signed in the presence of two witnesses. This may cause difficulties when social distancing or self-isolating.
Private Client Comparative Guide
McDermott Will & Emery
Private Client Comparative Guide for the jurisdiction of UK, check out our comparative guides section to compare across multiple countries
Settling Finances Following A Divorce: Costs In ‘Needs' Cases
Russell-Cooke Solicitors
When it comes to settling your finances following a divorce, where possible people want to avoid spending significant amounts on long drawn out Court battles.
FREE News Alerts
Sign Up for our free News Alerts - All the latest articles on your chosen topics condensed into a free bi-weekly email.
Register For News Alerts
Article Tags
UK Family and Matrimonial Divorce Family Law
Related Articles
Planning For 2022 Russell-Cooke Solicitors
The One With The Trainee And Ross From Friends Russell-Cooke Solicitors
Emma Wager Reflects On The Benefits Of Mediation From Her Perspective As A Solicitor, And Why She Has Trained As A Mediator Herself Russell-Cooke Solicitors
How Taking Early Advice Can Help Resolve Family Disputes Shepherd and Wedderburn LLP
Divorce Without Taking Sides (Video) Withers LLP
Mondaq Webinars
UK Construction Law Update: What happened in 2021? What can we expect in 2022?
Charles Russell Speechlys LLP
Webinar London UK
New Legislation Paves the Way for the Future of Aviation
HarleyJames Law
Webinar Nassau Bahamas
More Webinars
Comparative Guides
Anti-Corruption & Bribery
Artificial Intelligence
Banking Regulation
Blockchain
Cartels
More Guides
Mondaq Advice Centres
UK
Coming to and Investing in the UK
Global
Trademarks in SAARC Countries
More MACs