by Rachael Herbert (London)
Dentons
Your LinkedIn Connections
with the authors

There are few areas of planning law that can enliven the celebrities and moguls of London in the same way as that of basement development. It is a polarising topic and people are passionate in their views. Queen guitarist Brian May has even gone so far as to describe on his blog his basement-digging neighbours as 'selfish and brutish', referring to the piling rig they were using as an instrument of torture.

There is no denying that basement development has significantly increased in recent years. Karen Buck (MP for Westminster North) introduced the Basement Excavation (Restriction of Permitted Development) Bill 2015-16, a Private Member's Bill, towards the end of last year. At the first reading of the Bill on 16 September 2015, Karen Buck MP said: 'The impact of the size and scale of basement excavations on immediate neighbours is hard to overstate'. The Royal Borough of Kensington and Chelsea (RBKC) saw applications rise from 46 in 2001 to 450 in 2013; a 500% increase on 2003 figures. (The Bill has been withdrawn.) Why the recent surge in basement development? Despite popular press suggesting that the increase is due to greedy 'high-net-worth' individuals seeking to enhance their mansion homes with 'private leisure facilities' (swimming pools, tennis courts, garages and/or gymnasiums), in the main, the increase is owing to the rise in house prices.

For those in central London boroughs where space is at a premium and where heritage designations limit the potential for rear or roof extensions, 'subterranean development' (ie new basements and basement conversions) is often seen as a more economical means of increasing space than moving home. Many, particularly those who benefit financially from the construction of basements, suggest it is just a matter of smart maths. In London boroughs where the purchase price is at least £1,000 per sq ft, increasing space through a basement construction at approximately £400-£500 per sq ft is a far more affordable alternative, particularly when you consider the saved costs of not having to move (mortgage, agency and conveyancing fees, stamp duty, etc).

Unfortunately, one person's saving is often achieved at the expense of their neighbours.

Why is there so much resistance to basement development?

Basement development is typically opposed by residents due to the impact this type of development has on quality of life, namely construction noise and disturbance (which may continue for up to three years in extreme cases), but also due to fears over potential physical damage to neighbouring properties. While the majority of planning objections do not relate to the development outcome itself – most completed basements cannot be seen from the outside – there have been some extravagant 'iceberg' proposals that have enraged neighbours and Londoners in general, including:

Most basement developments will require planning permission, but not all. There is no provision in the Town and Country Planning (General Permitted Development) Order 2015 (the 2015 Order) which exempts basement development from the need for planning permission; however, basement development is generally considered to benefit from permitted development rights under Part 1, Class A, Sch 2, as it is considered to be works for the 'enlargement, improvement or other alteration of a dwelling house'. These permitted development rights are subject to a number of exclusions set out in paras A.1(a)-(k), and will not apply to flats/maisonettes. In addition, they do not remove the requirement for listed building consent, or the legal requirement to preserve trees located within a conservation area or those subject to a tree preservation order; appropriate consents will still be required.

... the enlarged part of the dwelling house would have more than one storey and –

The uncertainty related to whether:

A recent case brought by RBKC, concerning two conjoined statutory challenges over inspectors' appeal decisions to grant lawful development certificates, has provided some clarity on this issue (Royal Borough of Kensington and Chelsea v Secretary of State for Communities and Local Government [2015]; see box on p17 for PINS references). Patterson J, sitting in the Planning Court, determined that:

If there is any doubt whether a proposed development can benefit from 'permitted development' rights, an application for a certificate of lawfulness of proposed use or development (under s192(1) of the Town and Country Planning Act 1990) can be submitted to the local planning authority (LPA) for a formal decision.

Unless a basement proposal falls within the specific criteria for permitted development, planning permission will be required.

An amendment to the 2015 Order comes into force on 6 April 2016 which clarifies this point; the amendment will now tie the seven-metre restriction to the dwelling house being enlarged (SI 2016/332).

If a planning application is required, how will it be assessed?

Similar to above-ground development, there is a suite of planning policies to be taken into account in the consideration of a proposal involving basement development. These include the National Planning Policy Framework (NPPF), the National Planning Policy Guidance (NPPG), the London Plan, the relevant LPA's development plan and any supplementary planning document (SPD). While the NPPF and NPPG contain nothing specific in relation to basement development, (and the latest consultation 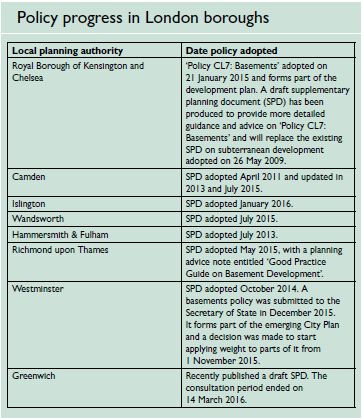 on the government's proposed changes to the NPPF does not indicate that there will be any amendments made to specifically address this issue), their principles regarding design, heritage assets, amenity and sustainable development are all relevant to the assessment of basement development and are typically considered in the development of a LPA's SPD.

The table below provides a snapshot of the planning policy progress that has been made by those LPAs most inundated with basement applications.

As is clear from this table, RBKC is the only LPA to have an adopted development plan policy for basement development: Westminster is in the process of doing so (the examination of its basement policy was held from 8-10 March 2016). Even if Westminster's policy is considered sound and ultimately adopted, that does not mean it will not be subjected to the same scrutiny and challenge as RBKC's policy.

In the High Court case of Lisle-Mainwaring v Royal Borough of Kensington and Chelsea [2015], the claimants, the freehold owner of a house in the borough who wanted to build a basement, and Force Foundations (Basement Force), a specialist in the design and construction of basements, sought to quash RBKC's new development plan policy on basements under s113 of the Planning and Compulsory Purchase Act 2004, contending that RBKC had failed to consider relevant considerations in making the policy. Adopted in January 2015, Policy CL7, the basements planning policy (BPP), imposes strict limits on the depth and lateral extent of basement development, ie it cannot exceed a maximum of 50% of each garden or open part of the site and cannot comprise more than one storey (subject to large-site exceptions).

The claimants challenged the BPP on two grounds:

Lang J refused the claimants' challenge on both grounds, confirming that an LPA could adopt a new development plan policy that seeks to restrict and regulate the construction of basements under existing homes, provided that its decision to do so was a reasonable one, reached after taking into account the relevant considerations and adequately explained and justified (at paras 73-74, 123-129 and 141). The judge also reaffirmed that the question of what is a reasonable alternative is a matter of evaluative judgement for the LPA in question, following the Court of Appeal's decision in Ashdown Forest Economic Development LLP v Wealden District Council [2015], handed down the day after arguments in Lisle-Mainwaring concluded.

What is the current position on basement developments?

What is the future for basement developments?

The days of a multi-level basement are gone. Unless a dwelling has an extant permission for 'iceberg' development (like John Hunt's permission for his Grade II-listed mansion at Kensington Palace Gardens), homeowners will need to modify their grand designs to a more modest, single-storey basement (unless they qualify as a large site).

It seems certain that the ability to rely on permitted development rights will be eroded in many London boroughs through the use of Article 4 directions. RBKC is looking to implement a whole borough restriction coming into effect on 28 April 2016 (consultation on such ended on 8 June 2015), while the Westminster Article 4 direction is set to come into force after 31 July 2016. Only 39 people in 2014 used the permitted development rights for basement works in RBKC, down from 129 in 2013. The imposition of these directions will remove the relevant permitted development rights, obliging an owner to apply for planning permission to carry out the intended work. The consequence will be that LPAs will have greater control over basement development within their areas, both in terms of the scope of the work proposed and the ability to impose appropriate planning conditions that aim to minimise the overall impact the works will have on neighbours' amenity.

Where basement developments have proved controversial in certain boroughs (primarily in central London), it is likely that the requirements of the RBKC BPP will be mirrored and rolled out by those authorities as part of their next local plan review, to control the increasing desire for subterranean development. 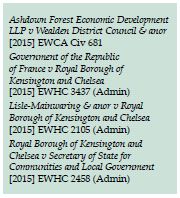