International Civil Aviation Day is celebrated every year to create and reinforce awareness of the impact of international civil aviation on the social and economic development of UN member states.

From moderately humble beginnings, where early human flight was confined to the lives of daydreamers and risk-takers, the International Civil Aviation network now carries over 4 billion passengers annually. Although this number is sure to have decreased in 2020, aviation has become a huge part of people's lives with the Air Transport sector supporting 65.5 million jobs around the world and contributing over GBP 2 trillion to the global economy.

With such immense and far reaching influence, it is no surprise that technical innovation in the aviation sector has reached tremendous heights. So why not look at some of the patents which have shaped this industry into what it is today.

It will come as little surprise that the first patent on this list is Orville and Wilbur Wright's "Flying-Machine", which was granted by the USPTO on 22 May 1906. US 821,393 describes the Wright brothers' wing warping and rudder structure design, which allowed their flying machine to be guided both vertically and horizontally while "maintaining or restoring the equilibrium or lateral balance of the apparatus". 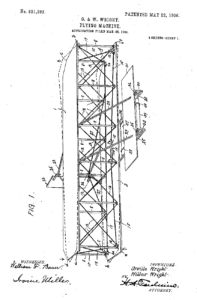 A few years later in 1910, German aircraft engineer Hugo Junkers filed a patent at the German patent office which claimed an inventive airframe which provided means for connecting wings and shell as to offer a "smooth surface to the air". Interestingly, Junkers described the design in US 1,114,364 as having a "substantially whale-back shape" which subsequently laid the foundation for the development of many future aircraft and allowed Junkers himself to construct the first practical all-metal aircraft.

Aviation took a giant leap forward to what we recognise it as today when British inventor Frank Whittle developed his internal combustion turbine in 1939. Whittle's engine, as described in GB 583,022, detailed a gas turbine with blades which drew in air through an orifice and discharged it into the turbine exhaust. This innovative engine concept would eventually surpass the piston and propeller design which dominated the aviation industry at the time. 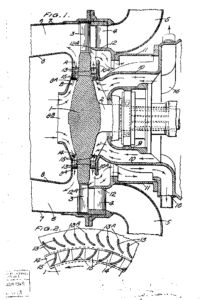 Finally, looking to the future, there has been substantial investment in producing aircraft to reduce the environmental impact attributed to the aviation sector. In this respect, Los Angeles-based company Ampaire are leading the way with their hybrid-electric aircraft, the Ampaire 337. Their patent application, US 2020/0017228, describes a parallel hybrid aircraft comprising an electric propulsion system and a combustion propulsion system for more efficient operation. The aircraft actually took flight on 6 June 2019 and was the largest aircraft of its kind to successfully do so.

ARTICLE TAGS
UK Intellectual Property Patent Transport Aviation
POPULAR ARTICLES ON: Transport from UK
Performance Guarantees, Vessel Arrests, And Implied Terms
Reed Smith (Worldwide)
In CVLC Three Carrier Corp and Anor v Arab Maritime Petroleum Transport Company ([2021] EWHC 551 (Comm)), Reed Smith (Nick Austin, Charles Weller, Alfred Perkins, Vassilis Mavrakis)...
The Malta Aircraft Registration Regime – A Favourable Aviation Base In The EU
Dixcart Group Limited
Malta has implemented an aircraft registration regime, structured in a manner to accommodate efficient registration of smaller aircrafts, in particular business jets.
Increase In Shipping Rates And Legal Issues Facing Shippers
Holman Fenwick Willan LLP
The knock-on effects of the Covid-19 pandemic are continuing to impact the global shipping market, with a shortage of containers coupled with a rebound in demand for goods driving freight costs to unprecedented levels.
FOB Contract - Rights and Obligations of Buyer and Seller Re-Examined
Barlow Lyde & Gilbert LLP
A trading dispute under an FOB contract provides the opportunity to clarify a number of issues including the role of local custom in the nomination of a port, whose right it is to nominate a loading place within a port, the nomination of a vessel incapable of loading at the original loading place and the nomination of a vessel incapable of performing the shipment.
Letters Of Indemnity Against Discharge Without Bills Of Lading – Seeking To Minimise The Trader's Risk
Ince & Co
It is common practice for traders, usually when they are the sellers of the goods and the charterers of a vessel, to instruct the carrier to discharge cargoes without production of the original bills of lading and to agree to indemnify the carrier against the consequences of doing so.
Losing The Right To Limit: Privy Council Confirms Parties Can Contract Out Of The 1976 Limitation Convention
Reed Smith (Worldwide)
This Alert looks at the question of whether it is possible to contract out of or waive the right to limit liability under the 1976 Convention on Limitation of Liability for Maritime Claims and if so, what is required in order to do so.
FREE News Alerts
Sign Up for our free News Alerts - All the latest articles on your chosen topics condensed into a free bi-weekly email.
Register For News Alerts
Article Tags
UK Intellectual Property Patent Transport Aviation
Related Articles
Hire And Withdrawal Reed Smith (Worldwide)
The Malta Aircraft Registration Regime – A Favourable Aviation Base In The EU Dixcart Group Limited
Performance Guarantees, Vessel Arrests, And Implied Terms Reed Smith (Worldwide)
UK Supreme Court Overrules Court Of Appeal On Disapplication Of The Crossing Rules Outside Narrow Channels Harris Kyriakides
Shipbreaking Judgment: The Shipping Industry And The Law Of Negligence Leigh Day
Mondaq Webinars
Visas, Work Visas/ Residence Permits and Nigeria's New Visa Policy
Famsville Solicitors
Webinar Lagos Nigeria
Competition Law Compliance Programs and Trainings: Client Experiences and Notes for the Future
ELIG Gürkaynak Attorneys-at-Law
Webinar Istanbul Turkey
More Webinars
Comparative Guides
Anti-Corruption & Bribery
Artificial Intelligence
Banking Regulation
Blockchain
Cartels
Mondaq Advice Centres
UK
Coming to and Investing in the UK
Global
Trademarks in SAARC Countries
Global
Investment Immigration
More MACs
Upcoming Events
The CJEU’s Billion-Dollar Questions – Who Gets A SEP Licence And When Should An Injunction Be Granted?
Bristows
Webinar London UK
Mondaq Social Media