by DLA Piper
DLA Piper
0 Liked this Article
To print this article, all you need is to be registered or login on Mondaq.com.

European data centres had a milestone year in 2018 for investment, with the value of transactions reaching a new high. Figures for the first half of 2019 suggest that another record year could be in sight.

What makes data centres so alluring to investors? Strong fundamentals help. While data centre investment involves some risks not present in other types of infrastructure assets (contracts are shorter than other types of infrastructure and the relative speed at which they can be constructed means there is lower barrier to entry for competitors), demand for big data, cloud computing, artificial intelligence and the Internet of Things is rising. These technologies drive demand for services and, by extension, the buildings and equipment that make them possible.

While the broad attractions are clear, this study reveals significant divergence between debt providers and equity investors in terms of investment behaviour. For example, the study highlights big differences in appetite for greenfield versus brownfield assets. It also shows that debt providers expect to be more active than equity investors over the next two years – though that is to be expected, as debt providers have the opportunity to work on refinancings. Additionally, the findings reveal a marked difference in outlook between the two groups over the stability of long-term revenue.

In the following pages, we examine these and other questions and consider what underlying dynamics might be at work.

Investment in data centres is set to scale new heights.

Two factors are driving growth. First is the shift to cloud computing, where data storage and software are hosted remotely in data centres and paid for as-a-service. From the Internet of Things to analytics, businesses racing to build new digital capabilities are tapping into the cloud to achieve their goals.

The second factor is colocation, or colo. This is about providing businesses with high-tech buildings to house their IT infrastructure. This matters because companies' existing real estate is not always suitable. A colocation facility typically offers power, cooling, connectivity and physical security. Customers provide their own hardware and software.

Cloud and colocation are transforming the way businesses consume IT. "Companies are looking to close onsite data centres to opt for outsourced units so they can better manage their resources," says the MD of a Netherlands-based financial institution. "This indicates that the number of data centres in Europe will increase, along with upgrades to infrastructure at current sites," the MD adds. 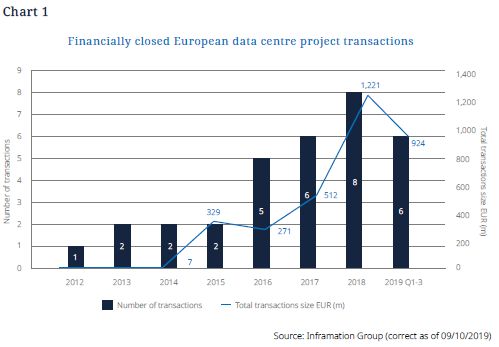 High-value assets are part of the appeal. "You have buildings and equipment, so you can secure against the asset," says Anthony Day, partner, DLA Piper. "You also have a sticky revenue stream, because data centre migration is a headache," he adds.

All of this is helping to attract new investors – infrastructure funds among them. "People are looking for more creative infrastructure to invest in. Data centres fit that quite well," says Mike Conradi, partner, DLA Piper.

Nearly all respondents (92%) expect the overall value of investment (including debt investment) that will go into European data centre projects to increase over the next 24 months compared with the previous 24 months. A majority expect the increase to be between 10% and 29% (Chart 2). 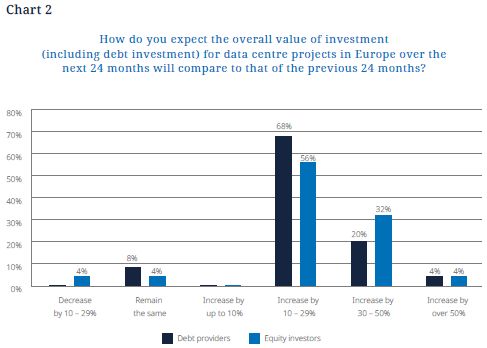 The survey reveals big differences between debt providers and equity investors in outlook. Debt providers are signalling an increasingly active role in the market and they predict big increases in the overall value of their investments, while equity investors' expectations are rather more muted.

Looking first at the outlook for value, debt providers expect to see a combined increase of 33% in the total value of debt investment they will allocate to data centres over the next 24 months compared to the previous 24 months (Chart 3). Equity investors, on the other hand, expect a more modest increase of 18%. 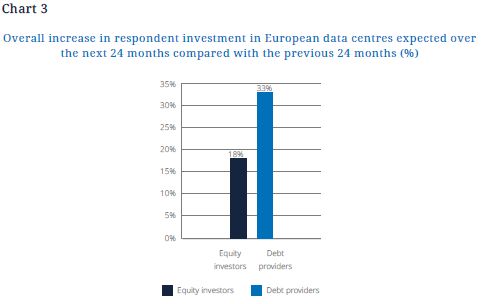 Volume expectations are similarly divergent. A larger proportion of debt provider respondents (36%) say they expect to finance four or more European data projects over the next 24 months than those who say they financed this number of projects in the previous 24 months (28%) (Charts 4 and 5). 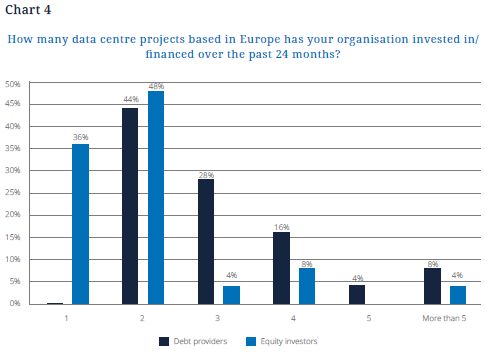 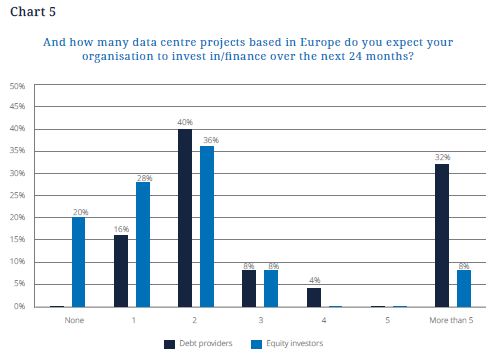 There are a number of possible reasons why debt providers expect to be more active than equity investors. Most projects are refinanced after a few years, giving debt providers more opportunities for deal activity. Moreover, the dearth of investment options elsewhere in the market is another factor. "Debt providers in particular have been suffering for a long time with very low returns," Conradi points out. "The figures suggest that they are starting to look at alternatives to a greater extent than equity investors," he adds. 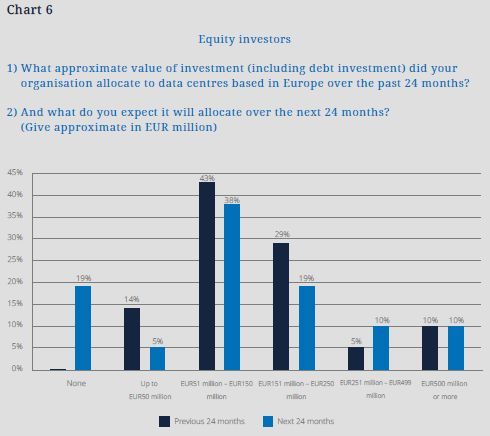 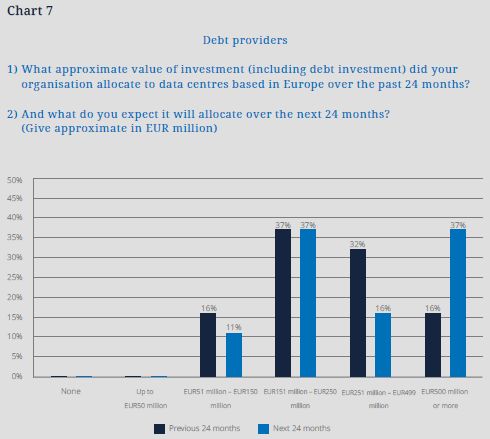