The patent profession was uncharacteristically excitable recently following news that software company Specifio had been granted a patent for software that uses artificial intelligence (AI) to draft patents. In a self-referential twist to the tale, the patent was drafted by Specifio's own software.

So, is it time for patent attorneys to pack up their pens and find another career? Or is the buzz around Specifio simply evidence of the patent profession suffering the same AI induced anxiety as other highly-skilled white-collar workers who, we are told, are on the verge of being replaced by machines?

What is often missed in the debate about how AI will reshape the world of work, and how previous technological leaps have impacted labour, is the productivity question. While AI won't be putting IP attorneys out of business just yet, it does have the potential – as in many industries – to increase productivity.

As with any job, being a patent attorney requires a range of skills. Some of these skills are what might be referred to as 'hard' skills – particular to the profession. To be a good patent attorney requires not just a high degree of technical and legal knowledge, but also an ability to deal with detail. As with any job, it also comes with administration and the need to organise knowledge and work in logical and efficient ways.

It is on these kind of hard skills where AI can compete with humans and may one day outperform them.

Imagine how much better, for instance, AI could conduct a prior art search. While the longstanding alliance between human searcher and prior art database is generally effective, the process is time consuming and often leaves many stones unturned. However, an algorithm capable of understanding complex technical ideas, and searching for similar concepts within the textual and visual content of documents in every language, has the potential to find the proverbial needle in a haystack. If such an algorithm could also learn as it searches, it might even reach a point where it no longer needs to search the prior art database because it has internalised all the knowledge already. Perfect prior art searches could be conducted in an instant!

And as attorneys and patent examiners come to rely on AI to assist with drafting and searching patent applications, patent databases will, with time, become ever more organised in ways suited to AI. Indeed, we could reach the point where the databases no longer make much sense to human operators, and AI shifts from being a luxury to a necessity for the patent profession.

Although this may sound far-fetched, AI-assisted patent searching tools are already on the market. Indeed, the European Patent Office has for some time used AI-based searches to supplement the searches carried out by its examiners.

Hard skills aren't the only things needed by a patent attorney, however.

The idea of 'soft skills' has become something of a cliché in recent years, but for good reason. As Western economies have moved away from being primarily based upon mass manufacture and labour intensive industry, the service sector has grown to replace it. We are now less an industrial economy, and more a knowledge economy. This knowledge economy is worth an estimated £95 billion in the UK alone.

The knowledge economy isn't just about knowledge, however. It's also about service, and this is where the human touch retains – for now, anyway – a significant edge over AI.

While AI might be able to search a patent database, and perhaps even draft some of the more generic parts of a patent, it cannot provide strategic IP advice that takes into account the wider economy and technological ecosystem. Nor can it reassure a client who's concerned that his or her competitor is purloining the invention they have invested so much time and money into realising. It cannot deliver the client service and care that ensures a long lasting and mutually beneficial business relationship. All of these things require soft skills, which AI is unlikely to possess anytime soon.

In AI circles this problem is known as that of 'artificial general intelligence' (AGI).

The problem is best summed up by the fact that AI at present has incredible depth, but limited breadth. The current generation of AI techniques might excel at a given task, such as playing chess. But ask a chess program to perform a simple task other than play chess – such as correctly identifying human faces in a picture – and it will fail miserably. An AGI on the other hand would be able to apply itself to any given task – whether trawling a database or conducting a human style conversation – and learn as it does so. An AGI would be far more like a human being.

For now at least, the knowledge economy is conducted through the medium of human general intelligence. Until AI can successfully replicate that – and the idea that this is even possible remains contentious amongst software developers and philosophers alike – uniquely human skills will retain their value.

This is well illustrated by patent disputes. As with all legal disputes, there isn't always a clear 'yes' or 'no' answer to the question of, for example, whether one party infringes another's patent. Differences of opinion can exist even among distinguished patent judges and, if it were not so, there would be no need for appellate courts. Ambiguities exist and human judgement is needed to untangle these ambiguities and set new precedent.

Even if AI could replicate this, would an inventor be satisfied with being told, by a computer, that his or her invention is obvious? Would society feel comfortable if patent offices were to grant patent monopolies with little, if any, human involvement?

A "computer says 'no'" situation in these scenarios simply wouldn't work. As such, while AI might be able to perform certain tasks related to the drafting and filing of patents, these will likely lead to an increase in productivity in the patent profession, rather than overcapacity.

Meeting the needs of an innovation economy

It is too early to provide clear evidence to support the proposition that AI will lead to increased productivity, rather than job losses. What is clear, however, is that as technological and economic development continues to reach ever more disparate corners of the globe, innovation is increasing.

This is illustrated by taking a look at patent filing data. 2018, the last year for which full data is available, saw nearly 250,000 patent applications globally, according to the World Intellectual Property Organisation. This represented a rise of 3.9% and follows growth averaging around 5% per year for much of the last 15 years. Much of this growth is being driven by emerging economies, while more established economies such as Europe and the USA are not seeing growth stop, but merely slow.

So, global demand for patent applications is growing long-term and at a significant rate. This is contributing to the longstanding backlogs at patent offices around the world. AI therefore could be of huge benefit in managing this workload and streamlining the patent granting process.

It is not just overall patent filings where we are seeing an upward trend. Patents related specifically to AI are also growing quickly. As illustrated by the below graph, the last ten years alone have seen patent applications in the field of AI nearly double. So, the technology is here to stay and will continue to have a wide variety of impacts, ranging from the economic to the political to the personal. 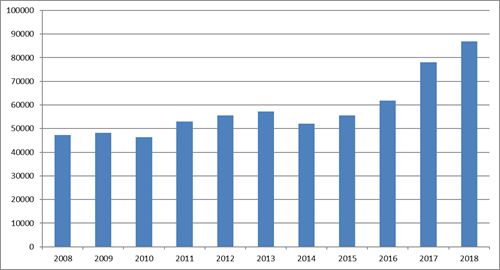 As in the patent profession, it is clear that – for now at least, and until the hypothetical scenario where we develop true AGI – human actors will remain essential to the knowledge economy. While it may be an AI-based algorithm that uncovers the prior art that invalidates a client's most important patent, such grave news will be best delivered by a human.

With some of the more routine parts of our jobs being automated, patent attorneys will have capacity for more work and more client service. This will surely be good for the profession and those we serve.

ARTICLE TAGS
UK Intellectual Property Patent
POPULAR ARTICLES ON: Intellectual Property from UK
Brexit & IP: What Is The Current Position?
Hogan Lovells
On 31 January 2020, the UK will formally leave the European Union and enter a "transition" period, which is currently set to end on 31 December 2020.
EPO To Increase Official Fees From 1 April 2020, Including An Increased Appeal Fee For Most Corporate Appellants
J A Kemp LLP
The European Patent Office (EPO) has announced that the official fees charged for European patent applications will be increasing from 1 April 2020.
Bad Faith In Trademark Law: Sky Plc v SkyKick
Gowling WLG
Today Europe's highest court, the Court of Justice of the European Union (CJEU), has handed down its much-anticipated judgment in one of the most important referrals...
The United Kingdom Will Not Implement The European Union Copyright Directive
Mayer Brown
Article 11 will give press publishers the right to claim remuneration for the online use of their content by third-party platforms who display snippets of their online content.
Greta Thunberg's Fight Against Imposters
Taylor Vinters
Last week Climate Activist, Greta Thunberg, announced that she (via her foundation) has applied to register her name, Fridays For Future and Skolstrejk för klimatet (School Strike for the Climate)...
European Patent Office And China National Intellectual Property Administration Announce Pilot Programme To Enhance PCT Co-Operation
Haseltine Lake Kempner LLP
A joint agreement was announced by the EPO and the China National Intellectual Property Administration to provide patent applicants filing an international patent application, in English, at the CNIPA as Receiving Office, ...
FREE News Alerts
Sign Up for our free News Alerts - All the latest articles on your chosen topics condensed into a free bi-weekly email.
Register For News Alerts
Article Tags
UK Intellectual Property Patent
Related Articles
Can AI Be An Inventor? Not At The European Patent Office Morrison & Foerster LLP
Supreme Court Hears Kymab's Appeal Against The Sufficiency Findings Of The Court Of Appeal Herbert Smith Freehills
Herbert Smith Freehills' IP Podcasts – Episode 2: 'Plausibility' In Patent Law Herbert Smith Freehills
More Than Skin Deep Marks & Clerk
A Royal Headache Marks & Clerk
Comparative Guides
Anti-Corruption & Bribery
Cartels
Corporate Tax
Enforcement of Foreign Judgments
FinTech
Mondaq Advice Centres
Global
Investment Immigration
Global
Trademarks in SAARC Countries
UK
Coming to and Investing in the UK
More MACs