Turkey: The Rules Of The Game Are Changing: Turkey Adopts A New Competition Act 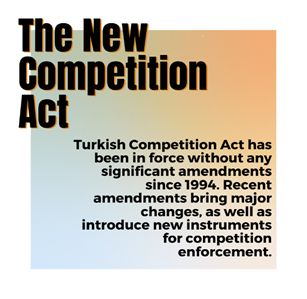 Amendments to the merger control regime

The New Competition Act changes the test applicable to review of the mergers and acquisitions. Before the amendments, the Competition Authority was to assess whether the transactions create or strengthen dominant position of an entity, hence "dominant position test" applied in Turkey's merger control regime. With the recent amendment, "the test of significantly impeding effective competition" is introduced in parallel to the EU approach instead of the "dominant position test" applied until today. How the new test will shape the practice will be determined with the new communiqués and guidelines to be issued by the Competition Authority. Thus, which kind of assessment criteria will be applied to the approach taken via this new test will be clarified.

Use of behavioral and structural remedies against competition violations

result for the reestablishment of the competition.

The provision of structural remedies has been highly criticized during the amendment discussions, and it includes significant uncertainties that may cause severe results for the entities. For this reason, the questions of how this provision will be put into practice, and what type of secondary legislation will be of high importance in the upcoming days, particularly for entities that will be in the scope of preliminary inquiries and investigations.

The New Competition Act introduces the commitment mechanism, which has not been in place until today, concerning investigations of competition violations. With the changes made to Article 43, entities are allowed to offer commitments in the course of preliminary investigation or investigation process for the infringements other than per se violations (such as price-fixing, allocation of markets or customers). If proposed commitments are deemed to meet the concerns regarding competition law problems, they can be binding on entities. Accordingly, the decision not to initiate an investigation or to terminate the investigation will be rendered. However, it shall be kept in mind that the Competition Board may reopen the proceedings where (i) there has been a change in any of the facts, (ii) the concerned entity act contrary to their commitments or (iii) the decision was based on incorrect information.The details on how the Authority's commitment mechanism will be put into practice by the Authority's communiqués and guidelines. The elimination of legal uncertainties regarding kinds of infringements to be left outside the scope and providing transparency with regards to commitment procedures are matters to be clarified in the upcoming days with secondary legislation of the Competition Authority.

Introduction of de minimis for the first time

It was not until today that de minimis played a role in Turkish competition law practice. With the New Competition Act, de minimis is introduced to be applied in preliminary investigation and investigation procedures. With the amendments to the Article 41, the Competition Board is now entitled not to initiate an investigation into agreements, concerted practices, and practices of associations of undertakings that are below a certain turnover and a market share threshold. De minimis can only be applied for agreements and practices that are not hard-core restrictions on competition (such as price agreements, allocation of markets/customers, and control of supply). With this amendment, the Competition Authority is now can allocate its resources to more significant investigations. The determination of the thresholds for turnover and market shares, and the question of what type of hard-core restrictions are out of the scope of de minimis, will be answered by communiqués and guidelines of the Authority in the upcoming days.

The competition authorities are among the most powerful governmental bodies when it comes to investigative powers. Their investigative powers can generally surpass the powers of the police and the prosecutors. In many instances, they are head-to-head with courts on the powers to examination and inspection. The extension of these investigation powers to the digital environment is being discussed around the world, as well as in Turkey.

Although the Competition Authority was by no means hesitant when it comes to investigating and using digital files during investigations, the Competition Act did not explicitly mention the examination of digital and electronic data nor considered them as evidence for investigations. This situation is changed with the New Competition Act, and the documents and information kept in the electronic environment are included in the Competition Authority's investigative scope. Therefore, the Authority is empowered to seize "any data kept within physical and electronic environment and information systems" during on-site inspections during competition investigations. During the amendment discussions, serious questions were raised on the said inspection powers will be put in place, and how the data that is collected will be secured. However, those questions are yet to be answered.

The increasing investigative powers of the competition authorities around the world is a topic of discussion. Indeed, national competition authorities are widening their investigative powers with the ECN+ Directive. Although Turkey is not part of the EU, many are saying that the recent amendment to review the digital environment by the Competition Authority is the reflection of the EU's ECN+ Directive in Turkey.

Article 5 of the Competition Act regulates the exemption from the prohibition of anti-competitive agreements. The entities are able to self-assess the qualification for individual exemption in Turkey since 2005. With the New Competition Act, this self-assessment rule is made even clear with the amendments to the wording of the rule.

In the upcoming days, we will be sharing our comments on the amendments, with more detailed information on how the new rules will shape the competition law practice in Turkey!