Turkey: The TCA's Tough Stance Towards Information Exchange Through Associations Of Undertakings

Recently, the TCA's approach to information exchange through associations of undertakings has become stricter as to the sharing of commercially sensitive information due to competitive concerns. Within this article, we aim to reflect on the issue of information exchange through associations of undertakings as handled by the TCA in three of its recent decisions. The Turkish Ceramic Federation (Türkiye Seramik Federasyonu, "SERFED"), the Construction Equipment Distributors and Manufacturers Association of Turkey (Türkiye Is Makineleri Distribütörleri ve Imalatçilari Birligi, "IMDER"), and the Forklift Distributors and Manufacturers Association (Istif Makinalari Distribütörleri ve Imalatçilari Dernegi, "ISDER") were the associations of undertakings subject to the relevant decisions whose applications for negative clearance and/or individual exemption were rejected because of competitive concerns.1

General Framework on the Information Exchange through Associations of Undertakings

In its the Association of Financial Leasing, Factoring, and Financing Companies Decision,2 the TCA summarized its approach regarding the criteria of information exchange that affect competition in the table below: 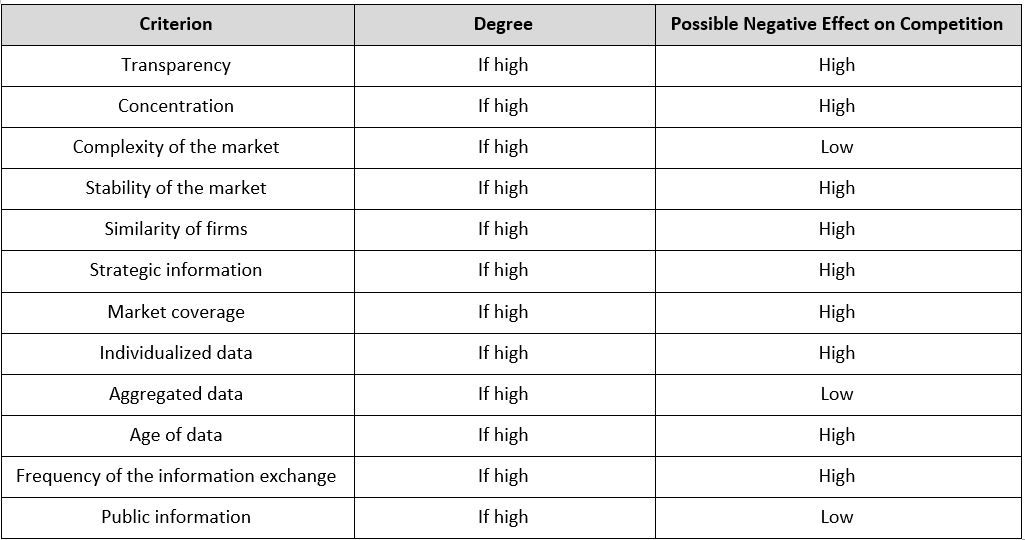 Within the scope of the TCA's decisional practice, assessments of the information exchange through associations of undertakings can be categorized as pro-competitive and anti-competitive depending on the specifics of each case.

Considering the abovementioned criteria, there also have been many occasions where the TCA has granted either negative clearance or individual exemption to the information exchange through associations of undertakings when the exchanged information has been aggregated. Even more, in 2019, the exchange of individualized container handling data within the Port Operators Association of Turkey (Türkiye Liman Isletmecileri Dernegi, "TÜRKLIM") was granted an individual exemption, considering the structure of the relevant market, for the period of five years.3

How the TCA Changed Its Approach?

The purpose of the relevant information exchange was to provide foreseeability and necessary information to the public authorities in the relevant sectors. It also was stated that the data would be collected by an independent third-party consultancy firm every three months, and the information would be collected only if it were given by the members voluntarily. It was further stated that the data would only include the total of three months, not each month individually, meaning that the collected data would be aggregated to prevent member undertakings from observing each other's data, and would be published with a two-month history. In other words, January-March data would be aggregated and, after the two-month retardation period, would be shared with the members in June. Finally, if there were no more than five members voluntarily participating in the data collection for every single subcategory, the data would not be compiled and shared.

The TCA evaluated the application for negative clearance within the framework of Article 4 of the Competition Law. As such, the relevant market was found to be available for coordination among competitors. Even though competitively sensitive information would be exchanged only between at least five undertakings, taking into account the market shares of the undertakings and based on a symmetrical market, the results possibly could be used to predict which of the undertakings acted against an anticompetitive agreement or to determine and track their compliance with the agreement. Furthermore, the data also could be used as an indicator for the rest of the market and lead to coordination amongst the competitors within the market and the coordination on the supply amount itself may lead to an increase in the prices of goods. In this regard, the TCA found that upon assessment of the structure of the market, the extent of the gathering and the age of the data was not sufficient to prevent the restriction of competition. With this, the TCA unanimously decided that SERFED's practice could not be granted negative clearance.

However, interestingly, with regards to the individual exemption application of SERFED, the TCA rejected this with a majority, with one member expressing his dissenting opinion. First, the TCA opined that the information subject to the exchange had not been sufficiently aggregated and historicized, which would restrict the competition by enabling the control over the costs and amounts of the sales and purchases. Furthermore, the information exchange on whether additional capacity would be needed by the undertakings might likely lead to the determination and restriction of the capacity and the amount of supply. Secondly, the TCA evaluated the possibility of the coordination on the determination of the supply amount and stated that this might cause price increases to the detriment of the consumers. Third, although the exchange seemed to concern only the top five undertakings in the relevant market, it was concluded that 50% of the market would be affected by such an exchange. Lastly, as the exchange at hand was found to be more restrictive than necessary to achieve the goals of consumer benefit and efficiency gains, the individual exemption application was not granted by the TCA.

The dissenting vote expressed that SERFED took every possible measure to prevent any anti-competitive effects arising from this information exchange, and even further, unlike other decisions where individual exemption had been granted, SERFED would be conducting the data collection only via an independent third party, where the results would be shared with the public. In light of this, the dissenting vote stated that individual exemption could have been granted.

In the IMDER decision, a platform named Imderonline was assessed in terms of information exchange. The case concerned an association of undertakings whose aim was to enhance foreseeability and provide the public authorities with the necessary information by exchanging information on the sale and rental amounts of construction machinery among IMDER members on Imderonline.

Upon the TCA's assessment of the application in detail, IMDER's application for a negative clearance and individual exemption was rejected. Within the scope of the negative clearance assessment, the TCA evaluated that some of the reports would include individualized data on a regional basis, while others would involve sales amount information on a provincial basis. Moreover, the data subject to information exchange were found to be more detailed than had been asserted, since its scope would not be limited to the period of the three-month and six-month reports.

Within the scope of the individual exemption assessment, the reports contemplated by IMDER were deemed to prevent resource waste with regards to undertakings as market research was lacking in the market of construction machinery. In addition, the undertakings were expected to make more rational decisions on production and exportation. The latter would contribute to the reduction in the costs, therefore in the prices, which would enable consumers to enjoy lower prices.

On the other hand, the practice would entail individualized data and would be shared only with IMDER members. Also, the data subject to exchange would be relatively current and was planned to be shared on a monthly basis. The TCA concluded that for the individualized information exchange to be allowed, it should be made available to the public. In addition, as the shared data would not be of historical quality, it was considered likely to that it would cause coordination between competitors and restrict the competition more than necessary.

All in all, the TCA, like the ISDER decision discussed below, found that the contemplated reports restricted competition more than necessary to achieve efficiency gains and consumer benefit.

Within ISDER's application for a negative clearance or an individual exemption decision on its practices to share reports with its members, the information collected by ISDER from its members was stated to encompass sales quantities and market shares and would be shared with member undertakings periodically. The data collection process would be conducted by ISDER members, and the members would be sharing this information voluntarily. ISDER emphasized that data sharing was in fact not mandatory and that they would not impose any kind of sanction to the undertakings if they were to opt-out of sharing. While these reports would have been only shared with ISDER members, they also would have been shared with public authorities upon request.

The TCA stated that the elements subject to the information exchange should be differentiated, as monthly sales quantity data based on individual undertakings constituted more of a risk in terms of competition, compared to the lower risk of periodical reports and six-month historic data reports. Moreover, the TCA also indicated that ISDER members constituted 80% of the market, and for this reason, it was not possible to agree with ISDER's claim that the market for forklifts did not display a stable structure and that the market was not suitable to give rise to coordinated effects. For this reason, the TCA rejected ISDER's negative clearance application.

Furthermore, upon the TCA's individual exemption analysis, it was found that the contemplated reports restricted competition more than necessary since the collected data were not processed by an independent research company, whereas in its previous decisions, this condition had been sought. Thereon, the TCA stated that even though the information exchange was done on a voluntary basis, this would not be publicly available. For this reason, non-ISDER members were unable to exert competitive pressure considering their size and position within the market; and as there had not been any new members for the past three years, that the membership conditions were not reasonable.

The TCA rejected ISDER's individual exemption application as the reports were found to restrict competition more than necessary to achieve the goals of (i) ensuring new developments or improvements or economic or technical improvement in the production or distribution of goods and in the provision of services, and (ii) consumer benefit.

Recently, the TCA seems to be steering in a different direction within its decisions regarding third party information exchange, as also discussed above when drawing a comparison between the TCA's previous decisions. Previous information exchange decisions seem to have been more lenient, such as granting individual exemption even though the information was not gathered by an independent third party, whereas within the above-mentioned decisions, the fact that association employees were to gather information, even if it was aggregated, has been deemed sufficient grounds for rejection. In the earlier decisions of the TCA, aggregated and historic data were more likely to be considered pro-competitive relative to individualized and future data, in particular the data relating to prices and trade strategies.

Considering this stricter approach of the TCA, it is safe to say that the TCA is adopting a much more conservative approach with regards to third party information exchange. Undertakings operating in the same product market should proceed with caution when it comes to information exchange through an association of undertakings. The TCA may deem just about any type of information or data exchange as anti-competitive, especially within sectors where undertakings have high market coverage.