by Malika Khushmatova
GRATA International
Your LinkedIn Connections
with the authors
To print this article, all you need is to be registered or login on Mondaq.com.

The influx of foreign direct investment in Uzbekistan has found a breath of fresh air after fundamental changes in the higher political structures in 2017-2018. Since that, several reforms pro-business credentials have been vigorously enforced in Uzbekistan. By virtue of the recent amendments in the Uzbek investment law, the state guarantees provided by national law, BITs and MITs cherish a hope for the investor entering the Uzbek market.

Among one of the paramount guarantees is the right to access international arbitration. One cannot deny that due to the high risk of bias or lack of expertise by national judicial organs, denial of justice is overseen as a front-row risk for the investor facing an obligation to refer to the national court. Here is the obvious clash of state's and investor's interests, since in most of the cases the host country seeks to resolve disputes with investors within its jurisdiction (Calvo doctrine).

The same scenario may be viewed in Uzbekistan. As per Article 63 of the Law "On Investments and Investment Activities" No. ZRU-598 of December 25, 2019 (the "Law on Investments"), a dispute related to the investment activities of a foreign investor in the Republic of Uzbekistan shall be resolved in the following manner: 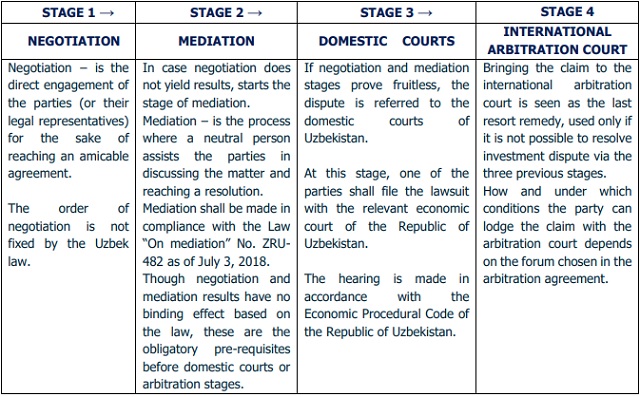 As can be seen, each of the steps is mandatory. For the pre-arbitration stages like negotiation and mediation, investors are mostly inclined to circumvent those by shortening or initiating simultaneously for the timesaving purposes.

As regards domestic courts stage, before referring to ICSID or any other international arbitration court, the investor-party shall have no other recourse but to have a chance with the economic courts of Uzbekistan first (exhaustion of local remedies rule). Evidently, this provision is a stumbling block on the way of applying to the international arbitration. However, one shall bear in mind that international treaties ratified by Uzbekistan are considered as integral part of its domestic law and in case of any inconsistencies would have priority.

Another opportunity to skip domestic courts arises in cases where such consent is given by the state in international investment treaties like BITs. There are currently 46 bilateral investment treaties in force to which Uzbekistan is a party. If home state is a party to BIT, the investor of this country obtains a set of standard guarantees, which inter alia may include right to access international arbitration. For instance, some BITs with Uzbekistan, like Switzerland - Uzbekistan BIT (1993), Japan - Uzbekistan BIT (2008) envisage right to lodge claim directly to the arbitration court.

Otherwise, there may be viewed other types of ISDS in BITs, providing either domestic court or foreign arbitration as alternative, so-called fork-in-the-road-clauses. For example, Russia-Uzbekistan BIT (2013) or ChinaUzbekistan BIT (2011), eschew the necessity to go through domestic courts, provided the parties injected relevant dispute-resolution mechanism in their arbitration agreement. It needs to be recognized that BITs with fork-in-theroad-clauses are the commonest of other types of ISDS.

Though rarely, but one may stalk with BITs, which bar arbitration with the prior resort to local remedies. As a rule, such ISDS clauses can be met in old BITs like Iran - Uzbekistan BIT (2000).

Should there be no BIT or arbitration agreement on which the foreign investor may rely, international arbitration may become available on the basis of the multilateral investment agreements (MITs) like ECT, which contain the state's unconditional consent to arbitration. In turn, ICSID Convention does not imply for whatsoever consent. Pursuant to its preamble the mere participation in ICSID Convention does not constitute consent to its jurisdiction. In fact, none of the MITs, ratified by Uzbekistan granted exclusive jurisdiction to international arbitration. For example, under Article 26 of ECT, investors may submit the claim before ICSID, Stockholm Chamber of Commerce or initiate a proceeding under UNCITRAL rules, but only before they had failed in the pursuit of their claims before the domestic courts. Moreover, one shall take into account the peculiar nature of ECT, whose disputes pursuant to Article 1 (6) are limited solely to the investment in the energy sector.

DRAFTING OF AN ARBITRATION AGREEMENT

The parties may decide on either an ad-hoc tribunal or institutional arbitration. Choice of fora is the key point for each arbitration agreement. At this stage the parties account for factors like price-performance ratio, reputation of the institution, overall speed of the proceedings, arbitrators' expertise, etc. Below are the available venues for the foreign investor, which applied foremost in ISDS involving Uzbekistan: 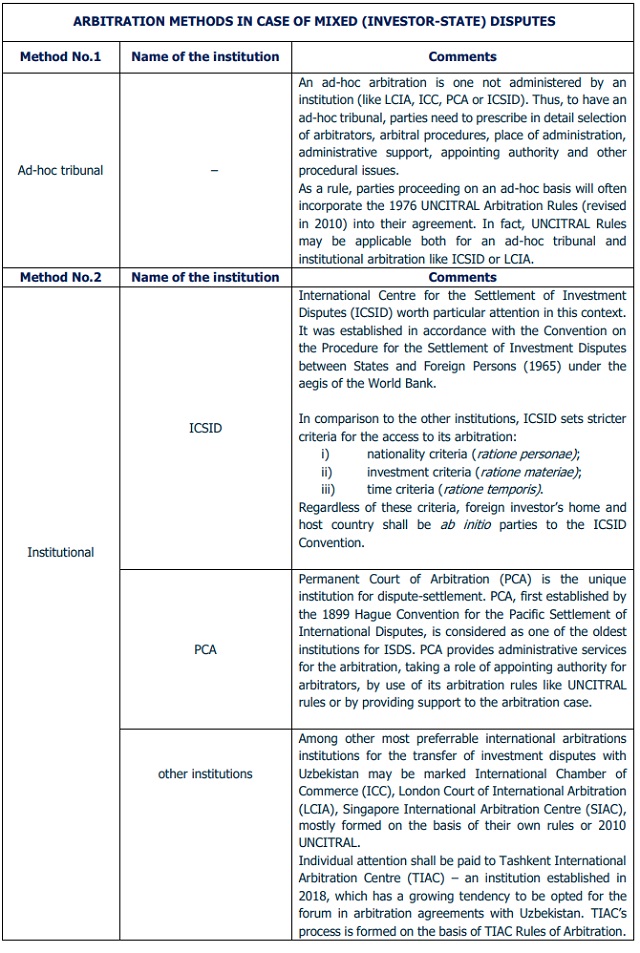 As can be seen, the investor is provided with a wide range of dispute venues. At this stage, investor needs to make a proper choice of forum relying on the feasibility of enforcement of the particular court/tribunal's decisions. For this purpose, it advisable to choose seat of arbitration in the country which is a party to the 1958 New York Convention on the Recognition and Enforcement of Foreign Arbitral Awards (the "New York Convention").

Additionally, one shall take into account the specific nature of the contractual relationship with the state, which, unlike an ordinary contracting party enjoys the right of sovereign immunity. Therefore, to escape undesirable procedural consequences, a state may waive its jurisdiction by including a waiver of sovereign immunity clause in the arbitration agreement. However, it is understandably difficult to obtain such a clause and the foreign investor must have a strong bargaining position to obtain it. It is also important to understand that such clause must not contradict national law, as otherwise it will be considered null and void.

Further to this, foreign investor shall procure the proper choice of forum included in the arbitration clause of the investment agreement, so that the arbitration court or tribunal ensures it has competence to adjudicate the case (kompetenz-kompetenz doctrine).

Should all of the criteria been met, arbitral awards in investor-state disputes shall be deemed final and non-reversible to another arbitration or domestic court (res judicata). Recognition and enforcement of foreign arbitration's court decisions on investment disputes can be made either through New York Convention or the ICSID Convention.

Arbitral awards under the ICSID Convention are automatically enforceable, whereas the arbitral awards under the New York Convention require both recognition and enforcement. The process of enforcement itself is carried out by the economic courts of the Republic of Uzbekistan. In addition, Uzbek courts apply the rules and provisions of the Economic Procedural Code, the Law "On enforcement of judicial decisions and acts of other bodies" No. 258-II as of August 29, 2001 and other legal and regulatory instruments for the recognition and enforcement of arbitral awards.

A recent increase in the inflow of foreign capital in Uzbekistan has led to a natural increase in investorstate relationships that spilled over the jurisdiction of one country. Foreign investors seek to resolve disputes at the international level relying on the principle of diplomatic protection. As a counterbalance to this, Uzbek law limits resort to arbitration by its national law. Regardless of that, investors do have a gateway to international forum in a number of ways.

Direct access to arbitration would be granted to the foreign investor if the state gives written consent to arbitrate through arbitration agreement, which relies on MIT or BIT. Above that, investor may also have a direct recourse solely under BIT, save its ISDS provisions provide for the different order.

In other scenarios, investor has to go through mandatory stage with domestic courts first and only after that file the claim against state on the international fora.

ARTICLE TAGS
Uzbekistan Government, Public Sector Inward/ Foreign Investment Litigation, Mediation & Arbitration Arbitration & Dispute Resolution Sovereign Immunity: Public Sector Government
POPULAR ARTICLES ON: Litigation, Mediation & Arbitration from Uzbekistan
The Competent Authority To Implement Foreign Arbitration Awards (Legal Alert 141)
Andersen in Egypt
Arbitration is a contractual form of legal settlement for domestic and/or international disputes. Any given party's right to refer their dispute to arbitration depends on the existence of an ‘Arbitration Agreement' between parties to the dispute.
Perjury Under Egyptian Law (Legal Alert 170)
Andersen in Egypt
Perjury is the intentional falsification of an assertion, to tell the truth, whether written or spoken, on a matter which is essential to a judicial procedure, with the aim of misleading the judicial authority...
An Overview Of The 2022 DIAC Rules: A New Start In Dubai
Norton Rose Fulbright
In our December 2021 issue, we wrote about Dubai Decree 34 of 2021, which abolished the DIFC-LCIA Arbitration Centre and transferred the DIFC-LCIA's cases to the Dubai International Arbitration Centre.
Defamation And The Law In Nigeria
Olisa Agbakoba Legal (OAL)
Defamation, in law, is the act of communicating false statements about a person that result in damage to that person's reputation.
Why Not Following The Prescribed Procedure To Cancel A Contract Can Land You In Trouble
ENSafrica
In the recent case of Datacentrix (Pty) Limited ("Datacentrix") v O-Line (Pty) Limited ("O-Line"), the South African Supreme Court of Appeal ("SCA") had to determine whether an agreement was cancelled in line with the procedure set out in the contract's cancellation clause.
The Procedure For Enforcement Of Judgments In Nigeria
Olisa Agbakoba Legal (OAL)
The enforcement of judgments, particularly in Nigeria is an important step in any matter brought before a Court for resolution.
FREE News Alerts
Sign Up for our free News Alerts - All the latest articles on your chosen topics condensed into a free bi-weekly email.
Register For News Alerts
Article Tags
Uzbekistan Government, Public Sector Inward/ Foreign Investment Litigation, Mediation & Arbitration Arbitration & Dispute Resolution
Sovereign Immunity: Public Sector Government
More Tags
Related Articles
Uzbekistan Introduces Changes To The Procedure For Considering Cases In Economic Courts GRATA International
International Arbitration 2021 GRATA International
In Uzbekistan A Draft New Edition Of Civil Code Has Been Published GRATA International
Доступ К Международному Арбитражу При Урегулировании Споров Между Инвестором И Государством В Узбекистане GRATA International
Spotlight On Uzbekistan: Kinstellar's Regular Look At The Uzbek Market - February 2021 Kinstellar
Mondaq Webinars
Global Offshore Fintech Focus on Crypto: Laws, Regulations and Trends [REPLAY]
Carey Olsen
A Comparative Approach to Professional Secrecy and Attorney-Client Privilege in Criminal Proceedings [REPLAY]
Monfrini Bitton Klein
More Webinars
Mondaq Advice Centres
Global
Trademarks in SAARC Countries
More MACs
Upcoming Events
Mondaq Social Media