The Situation: African leaders gathered in Kigali, Rwanda, in March 2018 to sign the draft Agreement Establishing the African Continental Free Trade Area ("CFTA") and other related protocols. Forty-four of the 55 Member States of the African Union signed the agreement. When 22 states have ratified, the Agreement enters into force.

The Development: If successful, the CFTA could radically reorient and expand intra-African trade, boost industrialization, and provide desperately needed jobs for Africa's fast-growing population. It could also make the continent a more desirable destination for foreign investment.

Looking Ahead: How difficult will upcoming rounds of negotiations prove? What challenges to implementation will need to be overcome? Can a full Customs Union eventually be achieved?

The implementation of various regional economic communities ("RECs") has had a positive impact on intra-African trade, reflected in an increase in the percentage of intra-African trade to 16 percent. By comparison, however, 70 percent of European trade is intra-European. Part of this disparity is explained by Africa's overreliance on extractives. This combines with a relatively low level of industrialization, at around 10 percent of continental GDP, to limit trade within the region. While trade in manufactured goods is growing in absolute terms, relative to all economic activity, Africa is less industrialized than 30 years ago. Other factors currently inhibiting intra-African trade include relatively high tariffs on many goods, non-tariff barriers ("NTBs"), trade facilitation challenges at and behind many African borders, relatively small single-country markets, and underdeveloped physical infrastructure such as road and rail links between countries. The CFTA and related instruments aim to address some of these challenges.

CFTA Can Also Increase Opportunities for Foreign Companies in Africa

Foreign companies looking toward Africa can also benefit. In contrast to an array of (relatively) small, individual country markets, the CFTA sets the stage for a greater Africa market. Africa remains full of potential: a market with a growing middle class, higher-than-global-average economic growth, and fast-growing population that has already reached 1.2 billion. The same value chains that are a goal of the CFTA for Africans offer opportunities for non-African participants in the continent's economic growth.

American Companies Are Still—and May Remain—Disadvantaged, But There May Be More Opportunities for EU Companies

While the recently renewed African Growth and Opportunity Act ("AGOA") helps some African firms export to the United States tariff-free, it is not designed to promote U.S. investment in Africa, and American companies may remain disadvantaged in Africa vis-à-vis European companies. The European Union has negotiated economic partnership agreements ("EPAs") with:

In addition, many African countries have duty-free and quota-free access to the EU market under the EU's Everything-But-Arms scheme. Like AGOA, the European Union's EPAs provide duty-free access for African products. Unlike the AGOA, the EPAs provide incentives and investment protections for investment in Africa. More EPAs are being developed. For instance, the EU and two Central African regional organizations, the Economic and Monetary Community of Central Africa, and the Economic Community of Central Africa States, are currently exploring an EPA using the "stepping-stone" agreement entered into with Cameroon. A more integrated African market through CFTA is therefore likely to benefit EU companies active in Africa, since each of the above EPAs include CFTA signatories. The United States has only one free trade agreement in place with an African country—Morocco. Additionally, while African countries have signed more than 800 bilateral investment treaties ("BITs"), the United States has signed only six BITs with African countries (including Morocco and Egypt). Only one of these (Rwanda) was negotiated within the last 20 years. The U.S. government's Trade Africa program, begun in 2013, has shown less dramatic results than its Power Africa, also launched in 2013.

Congress is considering the BUILD Act, which would create a U.S. International Development Finance Corporation ("IDFC") by integrating parts of USAID into the U.S. Overseas Private Investment Corporation ("OPIC"). The significance of this legislation is that the IDFC would have a $60 billion lending cap, double the amount that OPIC currently can lend, and could make equity investments up to 20 percent of the total equity of a project. This will make the United States more competitive with Chinese state-backed funds, which often take similar equity positions.

The contours of a new Africa-directed U.S. government initiative, currently referred to as "Prosper Africa," are uncertain and only in the discussion stage at the White House. U.S. Trade Representative Robert Lighthizer has indicated his aim to negotiate a new model FTA with a yet-to-be-named African country. Given the European Union's fast-evolving program of EPAs, and China's accelerating economic partnerships all over Africa, is one possible FTA a sufficient response? Some Africa business and trade experts have raised the ambitious idea of the United States considering an FTA with the CFTA. There are questions as to whether this could be achieved, considering the many parties, as well as the slow and uncertain progress of the Transatlantic Trade and Investment Partnership with the European Union and the White House's off-then-on perspective on the Trans-Pacific Partnership. On the other hand, some wonder whether a U.S. president on the lookout for bold moves could be drawn to a transformative United States-CFTA deal.

The Agreement and its African Challenges

Notably, Africa's two largest economies—Nigeria and South Africa—did not sign the Agreement in Kigali. Nigerian President Muhammadu Buhari, facing pressure from Nigerian industries that fear job losses in Nigeria will result from the CFTA, did not sign. South Africa President Cyril Ramaphosa said that his nation wishes to join, but only after the necessary legal processes are undertaken. It is, however, anticipated that both countries will join in due course. 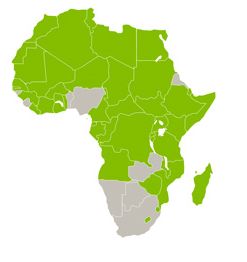 The Agreement remains a work in progress, with major protocols on goods, disputes, rules of origin, and other issues not yet finalized, or in some cases barely underway. RECs such as the East African Community, Southern African Development, and the Economic Community of West African States will be involved as implementing entities, but the mechanisms for their involvement have not been worked out.

Implementation is likely to prove challenging. Customs services around the world have proven resistant to reform, and African customs bodies and other border and behind-the-border institutions affected are and will remain resource-challenged. Additionally, the reductions in income—both as formal revenues to states, and informal revenue to individuals working at the borders—may lead to resistance. Many other governmental institutions (such as standards organizations and sanitary and phytosanitary bodies) will have to make major changes to their operations, and funding and technical assistance will likely be required to effect these reforms. Successful rollout of the World Trade Organization's Trade Facilitation Agreement, as well as broader adoption of the World Customs Organization's Revised Kyoto Convention on the Simplification and Harmonization of Customs Procedures, could accelerate successful implementation of the CFTA but will require major efforts on the part of African governments, as well as donors and technical assistance providers.

What Can the Agreement Mean for Africa?

If the Agreement eventually encompasses all 55 African Union member states, it will include more than 1.2 billion people and a combined gross domestic product already more than $2 trillion. According to the UN Economic Commission on Africa, with rapid implementation of the Agreement, intra-African trade could grow by 50 percent over current levels by 2022 and by 100 percent if NTBs are successfully addressed.

The draft Agreement aims to remove tariffs on 90 percent of goods. Removal of tariffs on the remaining 10 percent of "sensitive items" will be phased in later. The Agreement will also liberalize trade in services and hopes to tackle non-tariff barriers, such as border delays, which hinder trade between African countries. The CFTA's aims are to create a single continent-wide market for goods and services, including free movement of businesspersons and investments; eventually establish a Customs Union; and perhaps one day result in a single currency.

With its focus on cutting tariffs, the Agreement is not without risks for African countries—particularly smaller and less industrially developed African Union members. Countries with weaker capabilities could be disadvantaged. While creating more markets for one country, industrial development could be damaging elsewhere. Little consideration has yet been given to the uneven advantages that may be created and the potential loss of employment in some countries. Without some plan for trade adjustment in negatively affected countries and sectors, both economic and political challenges could ensue, with resulting political backlash.