As the Russian economy continues to struggle, issues relating to insolvency (bankruptcy) remain the priority for both local and foreign creditors. This article provides an overview of the legal framework of insolvency proceedings in Russia, with an emphasis on such pressing issues as challenging "bleed-out" transactions and liability of controlling persons. We also include the most recent statistical data, which may be helpful in shaping the expectations of companies finding themselves in insolvency scenarios and creditors contemplating their bankruptcy strategies.

Dynamics of Insolvencies in Russia 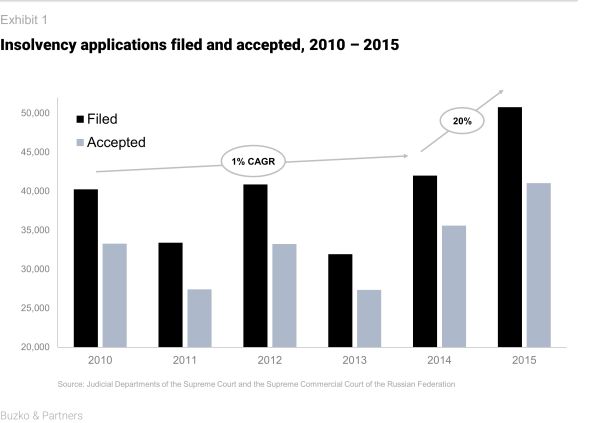 According to the latest Doing Business 2016 report, Russia's score for "resolving insolvency" is 51, which is 28 points lower than the OECD average for high-income countries, but 14 points higher than Russia's own ranking in 2015. This demonstrates a gradual improvement of the national insolvency framework, defined by such criteria as time, cost and outcome of insolvency proceedings, some of which are discussed below.

Under Russian law, insolvency is defined as the inability of a debtor to satisfy in full the claims of its creditors, including monetary payments and other pecuniary obligations. A legal entity is deemed to be incapable of satisfying the claims of its creditors if the respective obligations have not been performed within 3 months of the date of the due performance. Two more conditions must be met before a creditor can file for insolvency of a Russian entity:

Creditors are always free to choose whether to pursue bankruptcy, provided the above conditions are met. Moreover, when filing for insolvency they should always keep in mind that in case the debtor's assets are insufficient to cover insolvency-related expenses, such expenses can be assigned to the creditor.

Unlike creditors, debtors may be obliged to file for their own insolvency in certain scenarios. In particular, a CEO has an obligation to file for insolvency in a number of circumstances, including when the debtor does not have sufficient liquidity to repay its debts ("cash-flow" test), or its assets are not sufficient to fulfill the obligations ("balance-sheet" test). At the same time, case law confirms that the mere existence of accounts payable and an "unsatisfactory" balance sheet (when liabilities exceed assets) does not necessarily imply insolvency and, therefore, entail filing obligations.

Other conditions triggering the CEO's obligation to file for insolvency include situations when paying to some of the creditors would make it impossible to fulfill other obligations or when a debtor is subject to an enforcement action against its assets that prevents it from continuing its operations. A CEO must file for insolvency within one month of the relevant circumstance arising. Failure to do so may result in personal liability of the CEO. We will cover this issue below.

Russian insolvency law has recently been amended with the purpose of promoting and securing employees' rights, who may now file for their employers' insolvency. The same conditions must be met (RUB 300,000 threshold, etc.) before employees may file for the employer's insolvency. Although by May 2016 the total amount of wages payable (salary debt) in Russia exceeded RUB 4 billion (approx. EUR 55 million), employee-initiated bankruptcies remain uncommon.

In general, there are five possible insolvency procedures (stages) prescribed by Russian insolvency law, namely (1) supervision, (2) financial rehabilitation, (3) external administration, (4) liquidation, and (5) amicable arrangements. While financial rehabilitation, external administration and amicable arrangements are deemed as rehabilitative procedures, aimed at restoring a company's well-being, they proved to be ineffective and thus are rarely used in practice. The following table summarizes the main features of Russian insolvency procedures. 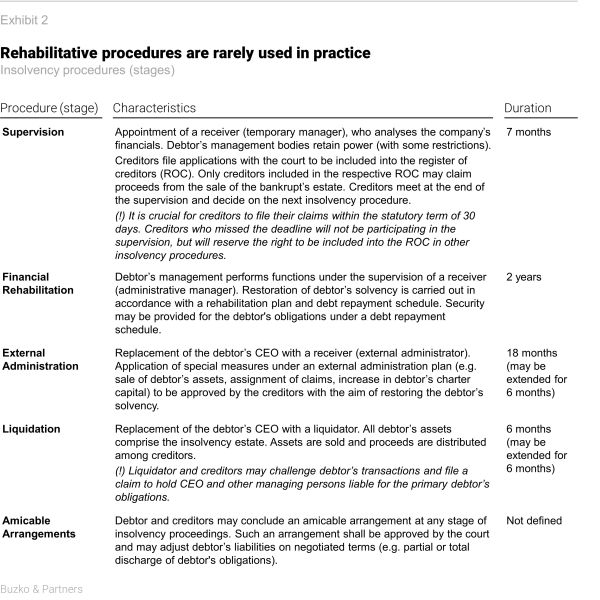 In the vast majority of cases, Russian insolvency proceedings start with the supervision stage followed by the liquidation. Rehabilitative procedures have always been relatively unpopular, but from 2010 onwards their use has been further decreasing. This is usually explained by the ineffectiveness of the existing rehabilitative measures, limited involvement of the court (e.g. no cram-down) and the behavior of secured creditors, interested in the prompt sale of pledged assets. With the purpose of enhancing the rehabilitative angle of the insolvency legislation, the Russian Ministry of Economic Development drafted a bill, introducing some of the element of the American bankruptcy model, in particular a procedure of restructuring (alike the U.S. Chapter 11). However, it remains to be seen whether such a bold proposal will be made law in the near future.

Entail unequal consideration from a counterparty (undervalue transactions), when the price or other terms are materially less favorable than in comparable arm's-length transactions. The most common scenarios include overvalued purchase (paying too much) and undervalued sale (receiving too little).

The general term for challenging suspicious transactions is 1 year. The extended 3-year term applies if such transactions had the purpose of harming creditors' rights, provided that actual damage occurred and other party was aware of the debtor's fraudulent intent. The burden to prove harmful purpose is on the party challenging the transaction; however, such purpose is presumed if the debtor had signs of insolvency and the transaction involved no consideration or was concluded with an affiliated entity.

Entail or may entail preferences to a creditor(s) over other creditors. Such transactions include, inter alia, provision of security to an existing creditor and satisfaction of a claim that has not yet matured (provided that there are other unsatisfied and due claims).

The general term for challenging preferential transactions is 1 month. The extended 6-month term applies if the creditor or another party involved was aware that the debtor was on the brink of insolvency. Such awareness is presumed in cases involving "interested" parties. 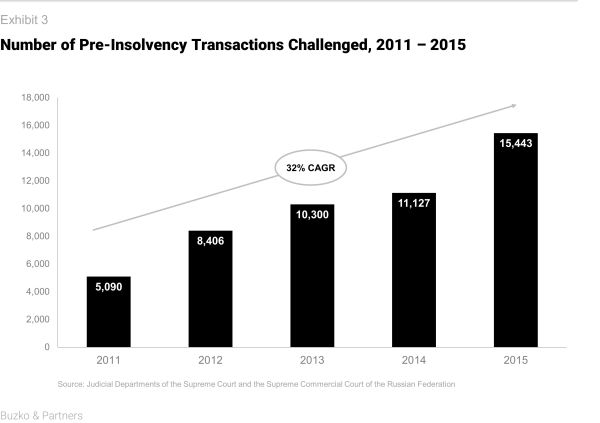 More and more insolvency proceedings in Russia are accompanied by applications to hold controlling persons liable – civilly, administratively, and criminally. Such applications are sometimes used to exert pressure on the debtor's management and owners. In other instances, liability of controlling persons can stimulate the return of assets into the insolvency estate. This is especially the case when, as a result of a breach of the duty of loyalty, the debtor's assets have been diluted.

A controlling person (a person who is or was entitled to give obligatory instructions to the debtor or otherwise determine the debtor's actions, including a shadow director) may be held civilly liable if the insolvency occurred as a result of that person's actions or inaction, provided that the debtor's assets are not sufficient to satisfy the creditor's claims. Controlling persons would usually include the debtor's CEO, majority shareholder and members of the board of directors.

It is presumed that insolvency occurred as a result of actions or inaction of a controlling person if such person concluded or approved suspicious or preferential transactions or if the debtor's accounting or reporting documentation is missing or incomplete (e.g. important information on the debtor's assets is missing). Besides, the debtor's CEO is also liable for losses caused by failure to timely file for the company's insolvency. Controlling persons are exempt from liability if they can prove that they acted in good faith and reasonably in the interests of the debtor.

A debtor's shareholders and managing bodies may be subject to criminal liability under the Russian Criminal Code. Such liability may follow unlawful actions, including concealment of assets, alienation or destruction of property as well as concealment or falsification of accounting and other records reflecting economic activities, provided that such actions have been committed in anticipation of insolvency and have caused damage amounting to RUB 1,500,000 (approx. EUR 21,000) or more. Insolvency-related crimes also include deliberate bankruptcy and fictitious bankruptcy.

Similar to civil liability, hardly any high-profile insolvency case in Russia goes without a criminal element or a creditor initiating a criminal investigation against the debtor's management. However, the number of detected bankruptcy-related crimes stays relatively low, amounting to 279 in 2015 (701 in 2010). In contrast, the success rate of civil liability cases has been increasing.

Russian law prescribes several ranks (categories) of creditors, so that creditors in the higher ranks get paid first. Some claims are characterized as current claims – these claims include obligations assumed after the initiation of insolvency proceedings, and are prioritized in comparison with other creditors in the ROC. Secured creditors (with pledge or mortgage) have priority, as they get 70% of proceeds from the sale of pledged assets (80% in the case of credit obligations). However, in order to take advantage of the security, secured creditors' claims have to be included into the ROC. 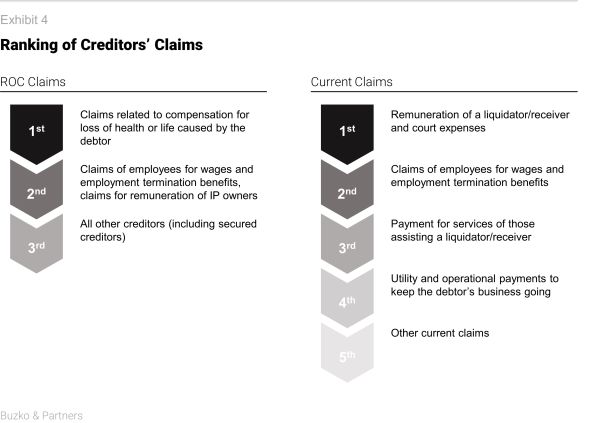 Claims of creditors not included in the ROC (except for current claims) can only be settled after all other creditors' claims have been satisfied. Therefore, it is crucial to timely file applications to be included in the ROC, as out-of-ROC creditors rarely get anything. Inclusion into the ROC should preferably be done at the supervision stage, but can also happen in other stages. In order not to miss the deadline, foreign creditors are advised to control the status of their Russian debtors (especially those in default) on the website of the Unified Federal Register of Bankruptcy Data (in Russian only).

At the end of the liquidation, the debtor's assets are sold through tendering. According to the World Bank, the general recovery rate remains fairly low – 41,3 cents on the dollar (in Moscow) in contrast to 72,3 cents on the dollar in the OECD (high-income). In practice, however, such recovery may be even lower due to late insolvency filing, unprofessional management, large discounting (average of 65%) and fraudulent transactions. According to the latest statistics revealed by the Supreme Court of the Russian Federation, creditors of 70% of Russian debtors have not received a penny as a result of liquidation proceedings completed in 2015. Therefore, getting security (pledge or mortgage) from a Russian counterparty can play a crucial role in hedging insolvency-related risks.

Insolvency is a complex process with many players on the stage. Ultimately, it is the proactive attitude of creditors that defines their fate. Recent changes to the bankruptcy legislation present a multitude of opportunities for creditors to fight the abuses and defend their interests.

Timely actions (filings to be included in the ROC, challenging transactions, bringing controlling persons to liability etc.) together with pre-emptive protective measures (getting security from the debtor and third parties) and vigilance (monitoring the Unified Federal Register of Bankruptcy Data) are crucial in securing protection of creditors' rights and guaranteeing the effective handling of otherwise counter-productive insolvency proceedings in Russia.