The importation of meat and poultry products into Gulf Cooperation Council ("GCC") nations, and other Islamic countries, is big business. One issue that has caused uncertainty in this important international market segment, is the necessity to obtain proper Halal Certification of the imported products. This article explores how that certification is handled, the problems in the process, and some options to streamline such by enacting a unified approach.

The GCC Market for the Products

There is no question that GCC nations have a large impact on the international meat and poultry market, due to the large amount of these products that they collectively import. Over 15% of the world's meat and poultry exports in 2015 were exported to GCC countries, with Brazil being the largest supplier, dominating with an impressive 80% of the market share. 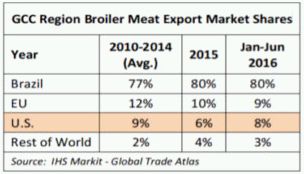 Saudi Arabia is the leading importer of Brazilian poultry. Not surprisingly, given Brazil's outsized market share, it is also the leading supplier of poultry products to the United Arab Emirates ("UAE"), with 68% of market share, as demonstrated in the table below:

Additionally, according to the data published by the Brazilian Commercial Intelligence Branch in 2016, meat and poultry products are collectively the greatest export from Brazil to the UAE.

Requirements for the Export of Meat and Poultry to Halal Importing Countries: the Halal Certificate

Companies looking to export Halal meat and poultry products must comply with several rules, such as the obtaining of specific certificates required by each country, among which is the Halal Certificate, confirming that the slaughtering process was executed according to Islamic rites. However, despite the similarity concerning some countries' regulation for the import of meat and poultry food – notably regarding the Halal Certificate – there is a lack of uniformity concerning such matters, as each country has its own distinct regulations.

Therefore, the GCC Ministerial Committee for Food Safety, acknowledging the importance of establishing joint regulations, on its first meeting held in September 2014, decided to adopt the GCC Guide for Control On Imported Foods (the "GCC Guide"), which was thereupon issued in 2015.

Notwithstanding the above, however, and despite the existence of the GCC Guide, the GCC nations, including KSA, the UAE, and Qatar, generally have their own separate, additional, and distinct Halal compliance requirements.

For example, the UAE has its own regulations regarding UAE Halal Products Control, which defines Halal Certificate in Article 1 of the Cabinet Resolution No (10) of 2014 as, "a document certifying that the products, services, and production systems thereof are in conformity with the rulings of Sharia, including Halal slaughter certificates, certificates of establishments, Slaughterhouses and facilities classified as Halal, certificates of preliminary components and additives to Halal Products and any other components in which meat and secretions thereof are included, rennet, and animal gelatin, fat, oils and derivatives thereof ".

It is important to note that the UAE's regulation provides that the Halal Certificate must have a serial number, be similar to the certificate form approved by the UAE and – pursuant to the Gulf Standard related to "Animal Slaughtering Requirements According to Islamic Law" – the UAE Embassy or Consulate in the exporting country must attest the Halal Certificate. The other GCC nations each have similar requirements that the product has been processed pursuant to Islamic standards and be certified accordingly in the country of origin.

As mentioned above, each GCC country has its own regulation concerning the import of meat and poultry products and – specifically regarding the Halal Certificate – its own certification body, which implies the existence of a large range of Halal certifying bodies and the use of different standards by them.

The lack of uniformity concerning Halal standards and regulations is considered a challenge that Halal product manufacturers and exporters have to face, and is a factor barring the growth of the Halal market. In this sense, as previously noted by the World Halal Forum (WHF) former Chairman, Khairy Jamaluddin, the lack of consensus on Halal standard is a relevant reason why the Halal industry cannot grow faster.

The absence of a global Halal standard results in uncertainty for companies intending to export Halal products and has a significant financial impact. This creates a social impact as well; product prices increase and this cost is then passed along to the consumer, as companies are compelled to make investments in order to comply with the different rules. Food consumption costs, generally being non-discretionary spending, are difficult for consumers to reduce, unless they make the Hobbesian choice to forego either food quality or adherence with Halal observance.

It is also important to note the economic and social damage that such lack of uniformity concerning Halal regulation may cause to exporting countries. This is due to the fact that manufacturing and exporting companies may not have the capital available to afford the necessary investments that are incurred due to the imposition of measures imposed by importing countries.

WTO Dispute between Brazil and Indonesia

These concerns are by no means limited to the GCC. Due to the existence of these different Halal standards, misinterpretations and disputes regarding the proper allocation of these rules have arisen within the scope of international trade, thereby harming the free flow of goods and the underlying principles and rules of the World Trade Organization ("WTO").

In this case, Brazil first requested consultations with Indonesia and, because of the failure to settle the dispute, in October 2015, requested the establishment of a panel concerning certain measures imposed by Indonesia on the importation of chicken products.

One of the arguments raised by Brazil concerns the imposition by Indonesia of restrictions on the import of the abovementioned products, justified by the alleged non-compliance with the Indonesian Halal slaughtering and labeling requirements. Per the Brazilian complaint, the measures taken by Indonesia were "more trade-restrictive than required to achieve its appropriate level of protection".

Brazil further asserted that Indonesia's position concerning the Halal slaughtering may have been used as an excuse to arbitrarily impose measures aiming to protect its internal market. Also, per Brazil's complaint, those measures were effectuated through the establishment of stricter Indonesian Halal requirements for imported chicken, than those applied to the domestic production. The WTO panel expects to issue its final report on this matter by April 2017.

In order to avoid damage to the international meat and poultry market, as well as ameliorate conflicts arising from the imposition of different Halal standards, among its other objectives, the Emirate of Dubai seeks to centralize Halal trade, by taking measures to unify Halal market procedures. In September 2016, a delegation of Dubai officials, including those from Dubai Exports, Dubai Islamic Economy Development Centre, and the UAE Consulate in São Paulo, Brazil, met with Brazilian business executives and government officials, and discussed the importance of addressing this issue. Various speakers at this meeting voiced their support for a movement to develop standard norms and certifications to be followed by all countries where halal products are consumed.

Whether this movement gains traction remains to be seen however, as each importing country would need to accept an agreed upon global standard for it to be effective, at least with regard to imports into its markets. Prior efforts have been made towards forging a global standard and have not been successful, and change is not imminent. Nevertheless, a global Halal standard recognized by all importing countries would undoubtedly mitigate the Halal import-export challenges created by a lack of unified standards, and the imprimatur of Dubai as a sovereign government in support of this initiative, can only be viewed as a very positive step.

The Halal market has perceived the urgent need for a globalized Halal standard recognized by all importing countries to ensure the adoption by Halal certifiers of proper guidelines in its certification process. This measure would not only be positive to the international trade and the commercial relationship between countries, but also to the population who would have more safety regarding the compliance of the rules of Sharia and would not suffer the consequences of the imposition of discriminatory and market-impeding Halal standards. It will take continuing efforts by the industry to convince enough national governments that this change is a net-positive before a standardized certification becomes a reality.