In 2018, a total of 1,567 AI-related invention patent applications were filed in Taiwan by 521 applicants, according to a Report released by TIPO on December 3, 2019.

Out of the 521 applicants, only 12 filed more than 20 AI-related invention applications that year, which are Alibaba HK, Beijing Didi Infinity Technology & Development Co., Ltd, Samsung Electronics, KLA-Tencor, ITRI (a Taiwan government sponsored research institute), Google, CHT (a leading telecommunication company in Taiwan), Qualcomm, ASML, Semiconductor Energy Laboratory Co., Ltd., Institute for Information Industry (another Taiwan government sponsored entity), and Acer. As many of the surveyed filings have yet to be laid open, the TIPO's Report does not provide these applicants' respective filing numbers other than a jurisdictional breakdown. 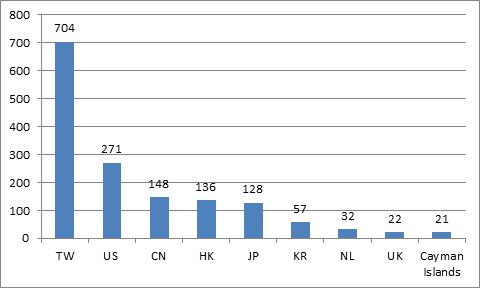 A jurisdictional breakdown of applicants of AI related inventions filed in Taiwan (2018)
(Translated from the TIPO's Report; same below unless otherwise noted.)

With a keyword string "artificial intelligence OR machine learning OR neural network OR deep learning OR learning algorithm" to locate the invention filings, a broad definition of AI is adopted in the TIPO's Report to encompass filings even not pertaining to neural networks or deep learning. TIPO's explanation is that their approach is actually modeled after a methodology used in a WIPO report "Technology Trends—2019-Artificial Intelligence" released earlier in the same year (2019) in which a likewise broad definition is adopted to survey the trends in AI technologies, AI functional applications, and AI application fields over the recent decades.

Still, the TIPO's Report looks into whether the inventions disclosed in the 1,567 filings relate to neural networks and how close the links are. The findings show that, only 487 invention applications (or 31%) were filed in 2018 in which neural networks are applied as core technical means, while an addition of 54 inventions (or 3%) dedicate to improvements for algorithms related to neural networks. Apart from that, there were 173 inventions (or 11%) filed for hardware in support of neural networks, making the total number of filings in the above 3 sub-categories (described by the TIPO's Report as what "actually keep abreast with global technological developments") arrive at 714. The significant percentage of said hardware inventions, including inventions in connection with AI chips, AI power supply systems and cooling devices, is quite unique if compared with the global trend in AI development found by WIPO, yet very much reflecting Taiwan's industrial characteristics. 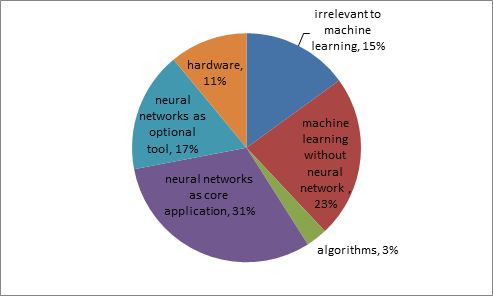 The AI technologies addressed in inventions filed in Taiwan (2018)

Following the methodology of the WIPO Report again, the TIPO's Report provides a cross-tabulation analysis with "AI functional applications" and "AI application fields" of the located 1,567 inventions, and the findings are as follows. 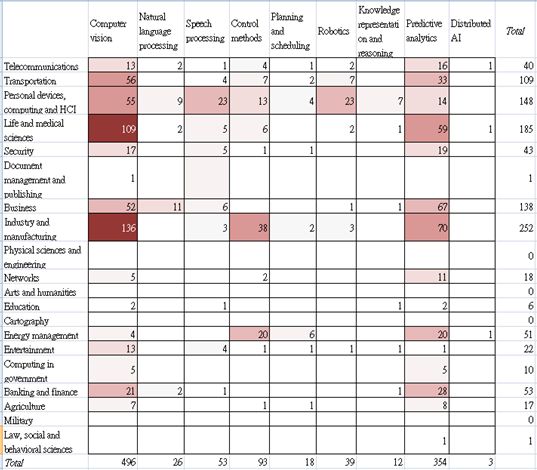 A cross-analysis of AI-related inventions filed in Taiwan (2018)

Having the above data compared with the global data revealed in the WIPO Report (see below), the TIPO's Report identifies the following local features (not solely contributed by Taiwanese applicants, of course): 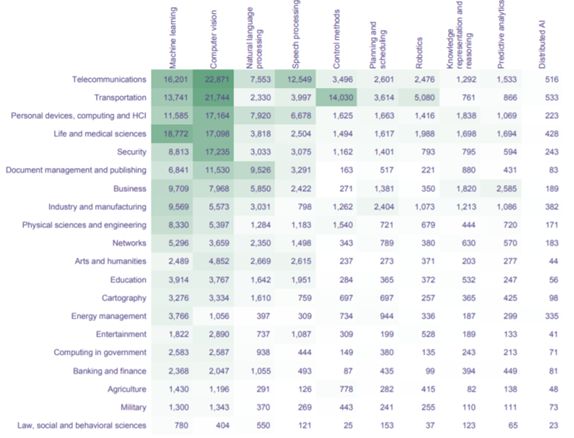 A cross-analysis provided in the WIPO Report (Figure 3.20)

In the last section of the Report, TIPO analyzes the prosecution status of the located filings. Out of the 1,567 filings, roughly 1,000 have yet to be substantively examined as of August 2019, but out of the remaining roughly 567 filings, 200 have already been allowed for patents within the same timeframe. Another good message for AI-related invention applicants is that their chances in removing examiners' doubts on patentability issues are not low, especially by means of amendment of patent claims. For instance, according to the Report, out of 36 filings in which an enablement issue was raised and the TIPO has issued final Office Actions, 21 filings (or 58%) have been allowed for patents (but the Report does not reveal how many of these granted patents address technologies related to neural networks.) 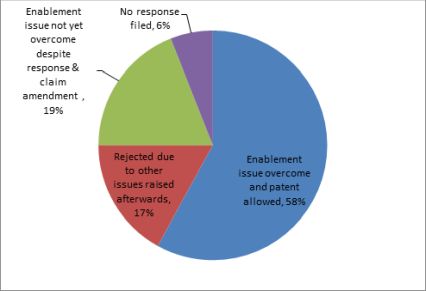 As experience tells us that filings in Taiwan would encounter less and weaker patentability obstacles if substantive examination is deferred until an outcome of a counterpart foreign filing in a leading jurisdiction, we predict that when those roughly 1,000 cases cease their current dormant status and start entering the examination stage, the figure will turn out to be more pleasing to applicants and agree with our understanding that Taiwan's examiners generally take a friendly attitude towards AI-related invention filings. For a brief introduction of the examiners' examination practices in this regard, please refer to another article "Is "Business Method" Patentable?"

ARTICLE TAGS
Taiwan Intellectual Property Patent
POPULAR ARTICLES ON: Intellectual Property from Taiwan
Patent Law in India
Anand & Anand
The Patents Act 1970, along with the Patents Rules 1972, came into force on 20th April 1972, replacing the Indian Patents and Designs Act 1911. The Patents Act was largely based on the recommendations of the Ayyangar Committee Report headed by Justice N. Rajagopala Ayyangar. One of the recommendations was the allowance of only process patents with regard to inventions relating to drugs, medicines, food and chemicals.
Compulsory Licensing In India
Khurana and Khurana
WIPO defines patent as an exclusive right granted for an invention, which is a product or a process that provides, in general, a new way of doing something, or offers a new technical solution to a problem
Patents Law In India - Everything You Must Know
Vaish Associates Advocates
The presentPatents Act, 1970 came into force in the year 1972, amending and consolidating the existing law relating to Patents in India
What Can Be Patented In India?
Intepat IP Services Pvt Ltd
Sections 3 and 4 of the Indian Patents Act, 1970 specifically state exclusions to what can be patented in India.
Concept Of Fair Use And Fair Dealing In Copyright
Singh & Associates
Fair use supports "socially laudable purposes," typically, if not exclusively, involving the use of the copyrighted work by a second author
All You Need To Know About "Well-Known Trademarks"
Khurana and Khurana
With coming up of the new Trade Mark Rules 2017, a new procedure has been created that allows the Registrar to proclaim a particular trademark as "well known".
FREE News Alerts
Sign Up for our free News Alerts - All the latest articles on your chosen topics condensed into a free bi-weekly email.
Register For News Alerts
Article Tags
Taiwan Intellectual Property Patent
Related Articles
Trademarks Comparative Guide Saint Island International Patent & Law Offices
Is Non-Profit Use Non-Trademark Use? Saint Island International Patent & Law Offices
Sanyu's Paintings Provide A Window Into Taiwan's Civil Lawsuits Saint Island International Patent & Law Offices
国際消尽適用に関する台湾裁判所の判例と傾向 Saint Island International Patent & Law Offices
Taiwan IP Court's Recent Decision On Patent Exhaustion And "Water Goods" Saint Island International Patent & Law Offices
Mondaq Webinars
Future Series: The Journey to Net-Zero: Climate Change, Carbon Credits and Emissions Trading
Bennett Jones LLP
Webinar Calgary Canada
Notice and Claims Administration Best Practices: U.S foundations, Global Implications
Angeion Group
Webinar Philadelphia, PA United States
More Webinars
Comparative Guides
Cybersecurity
Data Privacy
Patents
Trademarks
Virtual Currencies
More Guides
Mondaq Advice Centres
Global
Trademarks in SAARC Countries
Global
Investment Immigration
More MACs
Upcoming Events
Mondaq Social Media