Under the Japanese patent practice, invalidation trial and post-grant opposition system are two ways to challenge patents granted by the JPO. An opposition is an ex parte proceeding, and therefore, it is a "re-examination" by the JPO, whereas an invalidation trial is an inter partes proceeding before the JPO to determine whether a patent should be invalidated. Senior JPO Examiners handle both invalidation trials and oppositions. This article outlines each system and provides detailed comparisons between these systems.

To begin with, the following comparative chart illustrates the nuts and bolts between a post-grant opposition system and an invalidation trial. Detailed information will be explained in each part of the article. 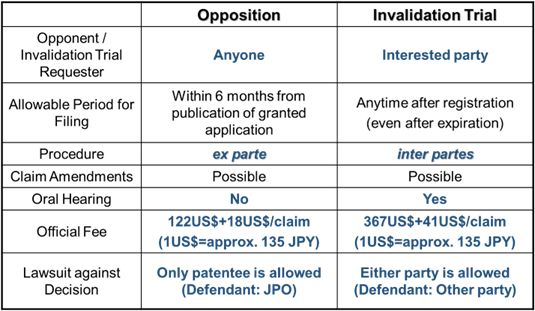 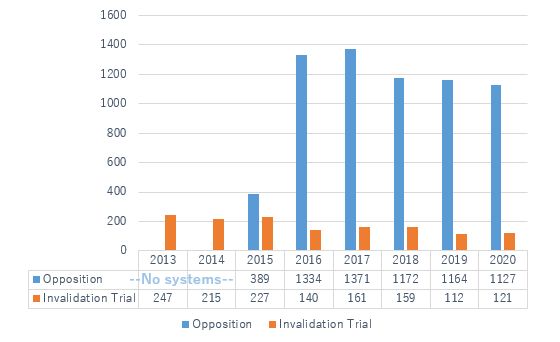 Let's take a closer look at an overview of post-grant opposition system. First, an opposition case can be filed by anyone, even by a straw man, within six months from publication of the granted application. However, anonymous filing is not permitted. An opponent must submit a complete opposition brief together with all evidence by the statutory deadline. An Opposition Brief cannot be amended after the deadline if such amendments change the gist of the opposition (new grounds cannot be added and substantial evidence cannot be replaced/added). If two or more oppositions are filed against a single patent, in general, these oppositions will be consolidated. The examination of opposition cases is conducted without oral hearing. According to JPO statistics, the average period from filing a request for opposition to opposition decision was 7.4 months in 2020. Since the official fee is not expensive, which is one-third of that of invalidation trials, the opposition can be said to be an effective way to revoke the patent in a timely and cost-effective manner.

When an opposition is filed, the JPO examines whether arguments presented by the opponent are reasonable. If the JPO concludes that no arguments are reasonable, an Opposition Decision of Allowance will be issued directly. An opponent does not have any measures to take action against the decision, and the case is finalized.

On the other hand, if the JPO concludes that at least some of the arguments are reasonable, a First Office Action will be issued. In this case, if a patentee is a foreign party, they are allowed to file Amendments and Remarks within 90 days after receiving the Office Action. Afterwards, if the Amendments are filed, the opponent can file Remarks.

Assuming that the JPO still believes that the claims cannot be accepted, a Second Office Action will be issued. Similar to the First Office Action, the patentee can file Amendments and Remarks within 90 days. If the JPO concludes that the claims should be revoked even considering the patentee's response, an Opposition Decision to Revoke Patent will be issued. If the patentee is not satisfied with the decision, they can lodge a lawsuit against the decision with the IP High Court.

In addition, the patentee can request an interview with Senior JPO Examiners at least once, while the opponent cannot. If the Second Office Action is issued, the patentee can make claim amendments, which is the last opportunity to do so. Therefore, it would be recommendable that the patentee has an interview with the Senior JPO Examiners to discuss what claim amendments can be accepted by them at least before responding to the Second Office Action.

The following pie chart presents statistical results of opposition cases from April 2015 to December 2020. The results show that 51% and 36% of the opposition cases turned to patents maintained with and without claim amendments, respectively. 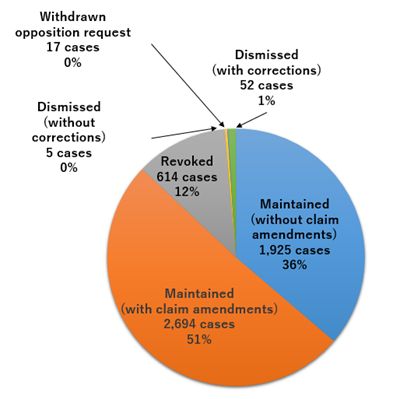 This supports that it is not easy for a patent to be revoked via opposition procedures, which reflects a current "pro-patent" trend in Japan.

Different from an opposition procedure, the JPO does not start their own examination soon. The JPO first sends a patentee a copy of a Request for Invalidation Trial including requester's arguments, and the patentee has to file a Reply including counterarguments thereof, and optionally Amendments, to the JPO within 90 days from the receiving day of the copy (if the patentee is a foreign party). If the Amendments are filed, the invalidation trial requester can file a Refutation. Afterwards, the JPO starts the invalidation trial examination and then an oral hearing will be held.

If the JPO still believes that patentee's response cannot be accepted, a Trial Decision to Invalidate Patent will be issued. If the invalidation trial requester and/or the patentee are/is not satisfied with the JPO's decision, they are both able to lodge a lawsuit against the decision with the IP High Court.

In conclusion, of course, the post-grant opposition system has some advantages that it is possible to challenge third party's patent in a simple, timely and cost-effective manner. But, taking the above comparisons into consideration, when challenging an important patent, the invalidation trial may be recommended rather than the opposition system.