In June 2020, we reported a case of copyright infringement on the exterior design of a karaoke booth, or K-booth in short (see the report here.)  Aimyunion, the design owner and Mainland China's leading K-booth company, was granted a NT$5 million damages award by the IP Court to be paid by a Taiwanese defendant called MINIK. 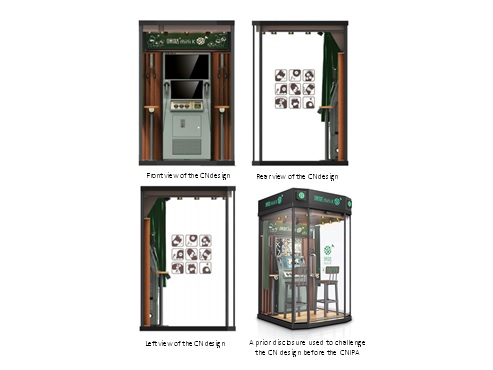 The exterior design put aside, the entire business model about K-booths disturbs copyright holders, whose legal actions against MINIK have never stopped since it placed its first K-booths in Taiwan's malls in 2018. Interestingly, Aimyunion does not show much presence in Taiwan's market, possibly due to the intrinsic legal uncertainties regarding the booth. However, on the question whether a K-booth engenders copyright infringement, recent answers from the courts are not much of a gratifying message to copyright holders.  Yang Sheng Multimedia Tech Co., Ltd. v. MINIK Co., Ltd., 109 Sheng Pan 18, Taipei District Court (July 2020).  Ruey-Ying Enterprise Co., Ltd. v. MINIK Co., Ltd., 109 Min Zhu 28, Taiwan's IP Court (November 30, 2020).  As the case names indicate, MINIK is the defendant in both cases.

What is a K-booth and how does it work? According to the facts found in these court decisions, a K-booth system can be understood as a coin-operated computer jukebox placed in a phone-booth shaped space, air-conditioned, curtained, and soundproofed. Unlike a traditional jukebox, it connects to a server (usually off-shore and cloud-based) through a wired network, and the server stores a catalogue of web links to free streaming music videos placed online by third parties. On the computer's user interface, the catalogue is reduced to a mere song menu, with all the web links hidden from sight, making it difficult to check whether or not the videos come from legitimate sources. Once the user completes an order, the computer passes it to the server which then activates a preset video link and transmits the streaming data to the K-booth to display.

Under the current copyright classification, when an unlicensed video is played in a K-booth, at least three types of exclusive rights may be harmed: reproduction right, public transmission right (in a digital work), and public display right (in an audiovisual work). However, in an interpretative opinion "on cloud streaming to a third-party's database," the Taiwan IP Office (TIPO) commented:

No copyright infringement issue occurs in providing consumers with a karaoke booth device used to watch an online audiovisual content stored in a cloud database, because web browsing does not entail use of a copyrighted work.  Nevertheless, if the hyperlinks of concern are provided to the public with a clear knowledge that they link to copyright-infringing videos, it is possible that the proprietor will qualify as an infringer or its accomplice on public transmission right. (Italics added)

Thus, according to TIPO, running a K-booth does not lead to copyright infringement if the linked videos do not infringe.  This means whether the video copyright holder ever grants a license to K-booth video displaying is basically irrelevant, as there is no exclusive "forwarding right" under the current Copyright Law regime.

This opinion was shared by Taipei District Court in Yang Sheng v. MINIK. In this criminal case decision, upon finding that the disputed streaming videos can be "easily located and catalogued" through use of Google Search and YouTube, the judges indicated:

The petitioner (the plaintiff) is unable to name any video which is listed in these booth devices yet unsearchable on the Internet, and is unable to prove its songs are shown on an unlawful website in a way which a reasonable person knows is obviously in lack of the petitioner's license.  Nor can the plaintiff prove these booth devices are linked to a [cloud] database established by the defendant. Hence, there are no grounds to hold that the defendant's equipment, including the software, is set up for the purpose of connecting to illegal websites.

In the end of November 2020, in Ruey-Ying v. MINIK, the IP Court expressed a seemingly divergent view from the TIPO's opinion. On the one hand, the judge declared the plaintiff being an exclusive licensee to the copyrights in the disputed music videos in the territory of Taiwan has the right to "exclude MINIK from publicly displaying these video works." On the other hand, the judge held that the plaintiff failed to prove that these videos had been actually displayed in MINIK's K-booths:

Although the audiovisual works of concern were displayed in the asserted place and time by the Plaintiff's staff and the notary public, such orders and displays occurred in the context of evidence gathering and were hence approved or licensed in advance by the plaintiff.  We cannot say these persons' activities of displaying these videos were infringing on the Plaintiff's public display right.

Further, the Plaintiff admitted during the trial that, except for the records made by its staff and the notary public, there is no evidence to be submitted for this court's consideration on the infringement issue. As the plaintiff fails to prove the defendant has, absent the plaintiff's consent, publicly displayed any copyrighted works listed in the Appendix to this Judgment, the plaintiff's damages claim is groundless. (Italics added)

It is unclear from the judgment whether Ruey-Ying the plaintiff ever moved that the court order MINIK to disclose the web links along with the K-booths' Internet connection logs.  Similarly, while the judge declared MINIK shall not publicly display the plaintiff's copyrighted works, this holding does not come along with clear rationale for one to conclude that the judge has abandoned the TIPO's theory and resolutely accepted many copyright holders' claim that unauthorized displaying of a free streaming video in a curtained K-booth intended for two persons' use is itself an infringing conduct, whether the linked video comes from an illegal source or not.  If we assume the judge had adopted the copyright holders' claim, the part of her rationale to deny the Ruey-Ying's damages claim would seem counterintuitive.

What these two cases highlighted is the need for a new type of exclusive right to curb the spread of K-booths and like devices that forward to the public free (yet not necessarily infringing) streaming videos beyond copyright holder's control. In fact, in the most recent draft amendment to the Copyright Law, TIPO has proposed to introduce into the law a "public forwarding right," which excludes one from "real time forwarding a content protected by public broadcasting right or public transmission right with a screen, loudspeaker or other mechanic equipment."  Is K-booth video displaying a type of "real-time forwarding?" The answer is unclear yet, and the amendment bill is still awaiting the Legislators' deliberation.

ARTICLE TAGS
Taiwan Intellectual Property Copyright Patent
POPULAR ARTICLES ON: Intellectual Property from Taiwan
Patent Law in India
Anand & Anand
The Patents Act 1970, along with the Patents Rules 1972, came into force on 20th April 1972, replacing the Indian Patents and Designs Act 1911. The Patents Act was largely based on the recommendations of the Ayyangar Committee Report headed by Justice N. Rajagopala Ayyangar. One of the recommendations was the allowance of only process patents with regard to inventions relating to drugs, medicines, food and chemicals.
Patents Law In India - Everything You Must Know
Vaish Associates Advocates
The presentPatents Act, 1970 came into force in the year 1972, amending and consolidating the existing law relating to Patents in India
Assignment And Licensing Of Copyright
Singh & Associates
Copyright is a protection given to the creators of certain types of works as an acknowledgment to their intellectual input
China Files More European Patent Applications Despite Pandemic
AFD China
The increase contrasts with lower patent application numbers from most other leading technology regions.
Deceptive Similarity And Judicial View
Khurana and Khurana
Trademarks play a vital role in creating a brand name and goodwill of any business. Not only does it helps in creating a brand value but also, aids in revenue generation.
All You Need To Know About "Well-Known Trademarks"
Khurana and Khurana
With coming up of the new Trade Mark Rules 2017, a new procedure has been created that allows the Registrar to proclaim a particular trademark as "well known".
FREE News Alerts
Sign Up for our free News Alerts - All the latest articles on your chosen topics condensed into a free bi-weekly email.
Register For News Alerts
Article Tags
Taiwan Intellectual Property Copyright Patent
Related Articles
Trademarks Comparative Guide Saint Island International Patent & Law Offices
Is Non-Profit Use Non-Trademark Use? Saint Island International Patent & Law Offices
Sanyu's Paintings Provide A Window Into Taiwan's Civil Lawsuits Saint Island International Patent & Law Offices
国際消尽適用に関する台湾裁判所の判例と傾向 Saint Island International Patent & Law Offices
Taiwan IP Court's Recent Decision On Patent Exhaustion And "Water Goods" Saint Island International Patent & Law Offices
Mondaq Webinars
The Impact of COVID-19 on the Energy Industry and the Resolution of the Attendant Disputes
Dorothy Ufot & Co
Webinar Lagos Nigeria
World IP Day – Top Patent Cases of the year 2020 in Turkey and UK Perspective
Gun + Partners
Webinar Istanbul Turkey
More Webinars
Comparative Guides
Cybersecurity
Data Privacy
Patents
Trademarks
Virtual Currencies
Mondaq Advice Centres
Global
Trademarks in SAARC Countries
Global
Investment Immigration
More MACs
Upcoming Events
Mondaq Social Media