The oil and gas industry has continued to sustain recovery from contractions experienced in 2020 and 2021. On a global level, crude oil prices have been hovering around $100 per barrel, as global supply has failed to keep pace with post-pandemic rebound in oil consumption. Nevertheless, the outlook for crude oil markets remains uncertain due to Russia's Invasion of Ukraine and sanctions imposed on Russia by Western countries. Sanctions on Russia and its oil and gas products threaten to disrupt crude oil supply, as other members of the Organisation of Petroleum Exporting Countries (OPEC) are unable to pump sufficient oil to meet their production quotas. The International Energy Agency (IEA) projects that Russian production will buckle in the months ahead as sanctions take hold, plunging by about 3 million barrels a day (bpd) to 8.7 million bpd by the start of next year. The result is already evident, as there is a global shortage of crude oil and its products, and this is driving up energy prices globally.

In Nigeria, the 2020 marginal fields bidding round was finally concluded and award letters presented to 57 successful bidders towards the end of the second quarter. The Petroleum Industry Act (PIA or "the Act") is also gaining traction as some regulations have been discussed with relevant stake holders in line with the requirement of the Act and published. In addition, more International Oil Companies (IOCs) have announced their intention to divest their onshore and shallow water assets.

As Covid-19 cases seem to be on the rise again, there is a slight risk that the recent surge in infections will add another source of volatility to the oil and gas industry. This edition of our newsletter focuses on some noteworthy developments and the impact of these developments on the growth of the Nigerian Oil and Gas sector and the economy at large.

It is no longer news that the Russian invasion is still ongoing. The sanctions imposed on Russia by several Western countries and post-pandemic rebound in the demand for oil and gas have resulted in a global shortage of supply of oil and gas products, which has inadvertently driven the cost upwards.

According to a range of industry estimates, Western sanctions could reduce crude oil production from Russia, the world's second largest oil exporter, by as much as 2 million to 3 million bpd. Russia was already producing below its OPEC+ target of 10.44 million bpd in April with output running at about 9.3 million bpd.

To compensate for lost Russian oil barrels, OPEC has agreed to boost output by 648,000 bpd in July (i.e., 0.7 per cent of global demand) and a similar amount in August compared to its initial plan to add 432,000 bpd over three months until September. The move is seen as a sign of willingness by Saudi Arabia and other OPEC Gulf nations to pump more oil after months of pressure from the West to address global energy shortages worsened by Western sanctions on Russia.

As oil price hovers around 3 digits per barrel, analysts predict that the real production boost will be insignificant as most OPEC members, except for Saudi Arabia and the United Arab Emirates, are already pumping at capacity or constrained by technical issues. Saudi Arabia and the United Arab Emirates, the only members of OPEC able to raise output, are constrained in increasing their supply. According to the IEA, spare capacity in the two producers will be stretched at producing 2.2 million bpd by August. Other countries, like Nigeria, Libya and Angola, have constantly failed to meet their production quotas due to insufficient investments and operational challenges.

Global demand is expected to expand by 2.7 million bpd next year, bolstered by growth in emerging economies. It is, therefore, doubtful whether the other oil producers would be able to compensate for lost Russian oil barrels arising from the ban and this will clearly continue to worsen the supply situation.

Nigeria has continued to struggle with meeting its OPEC production quota occasioned by issues such as oil theft, oil pipelines vandalism incidents, aging infrastructure, and other technical issues. recently revealed that Nigeria reported a paltry 1.024 million bpd production in May, the lowest reported in a long time. Nigeria's underperformance compared to the OPEC quota in the past six (6) months is as shown below: 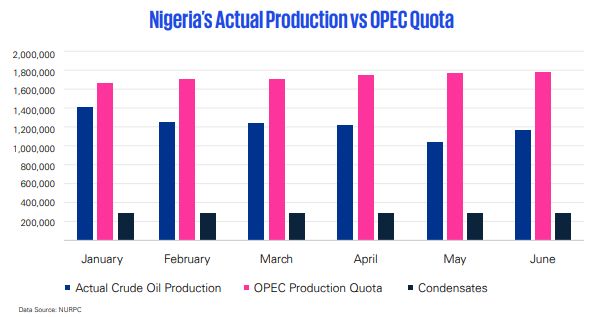 Based on the above, Nigeria's underperformance was as high as 700,000 barrels per day for the month of May. It, therefore appears that, despite the hopes and assurances by various government agencies, the figures do not seem to be improving, rather the country's production has completely deteriorated in the past months. Oil theft therefore remains a major source of concern and has significantly impacted Nigeria's ability to meet its production quota.

Oil theft in Nigeria has increased by about 17% to 120,000 bpd, according to Nigerian Upstream Petroleum Regulatory Commission (NUPRC or "the Commission"). The unprecedented level of theft estimated at a daily average of 103,000 barrels which was recorded in 2021 had grown to 120,000 barrels in the first quarter of 2022.

Notwithstanding the above, the Federal Government hopes to add 800,000 barrels to Nigeria's daily oil production via some upstream projects being executed by some IOC's. It is hoped that these projects, together with the heavy military presence deployed in the Niger Delta, will help Nigeria maximise its daily production and reap the benefits of the increasing OPEC quota. It is also important that the Government pay more attention to the issue of oil theft as failure to address this issue will constrain investment in the sector. There is also the need to collaborate with other countries to manage this problem as Nigerian cannot do it alone. However, there must be willingness and political will on the part of government to resolve the problem.

In June, the Federal High Court, sitting in Abuja, in the case between members of the Gbaramatu – Egbema and Ogulagha Coastal Communities Front (GEOCCE) of Delta State ("the Plaintiff") and Attorney General of the Federation and the National Assembly ("the Defendants"), dismissed a suit seeking to nullify Section 257(2) & (3) of the Petroleum Industry Act (PIA) 2021 (FHC/ABJ/CS/9/2022).

The Plaintiff had sought relief from the court that the provisions of Section 257 (2) & (3) of the PIA infringe on the right to fair hearing, are unconstitutional and therefore null and void. Specifically, the provisions of Section 257 (2) & (3) provide for the exclusion of cost of repairs of damaged facilities attributable to any act of vandalism, sabotage or other civil unrest, from the computation of payments to the Host Community Development Trust Fund.

The Court ruled that the provisions of Section 257 (2) & (3) are very clear and unambiguous, and do not take away the constitutional rights of host communities from seeking redress from the Court.

The NUPRC has commenced the operationalization of the Petroleum Industry Act (PIA of "the Act"). In April 2022, the Presidential Steering Committee on the PIA and NUPRC published several draft regulations aimed at providing additional clarification/information on the intent of some key provisions of the PIA. The regulations include the following:

The Regulations, which are consistent with the provisions of the PIA, outline the objectives and application of the Regulations, the general powers of the Commission, procedures for the establishment, management and dissolution of the Host Community Development (HCD) Trust and HCD Trust Fund, including guidelines for investment of the Reserve Fund, reporting obligations and other relevant miscellaneous provisions such as penalties and sanctions, process for reporting acts of vandalism, grievance mechanism and conflict resolution procedures and transfer of existing host community development schemes. You can access a copy of this publication via this link.

We understand that the other six (6) regulations have been finalised for publishing in the official gazette.

In addition, on 1 August 2022, the NUPRC issued a 21- day notice of consultation with stakeholders on Phase Two of regulations development. The draft regulations which the NUPRC requires stakeholders' input on are as follows:

You can access the above draft regulations via this link.

It is hoped that the Nigerian Upstream Petroleum Host Communities Development Regulations, 2022, as well as other regulations, once gazetted and when fully implemented, will ensure the smooth operationalisation of the PIA.