Nigeria's oil and gas sector, the mainstay of Nigeria's economy, is still largely governed by the Petroleum Act and the Petroleum Profit Tax (PPT) Act, enacted since 1969 and 1959 respectively. Since the enactment of these laws, the global oil and gas industry has changed significantly from an investment, governance and fiscal perspective. Although certain obsolete aspects of the aforementioned Acts have been amended, their inadequacies are evident, contributing to the development of the Petroleum Industry Bill (PIB or "the Bill"), which was first presented to the National Assembly in 2008. Over 10 years later, the Bill is yet to be enacted, leading to increased uncertainty and hindering the flow of the desired investments to the Nigerian oil and gas sector.

On 28 September 2020, the President presented the PIB to the National Assembly for consideration. The Bill seeks to introduce pertinent changes to the governance, administrative, regulatory and fiscal framework of the Nigerian oil and gas industry, in order to ensure transparency, strengthen the governing institutions and attract investment capital, among other objectives.

In this article, we focus on the key changes that the PIB proposes to introduce to the fiscal framework of the Nigerian petroleum industry.

Requirement for Companies and Taxation of Income from Petroleum Operations

Based on the existing laws, nothing precludes an entity from operating in more than one sector (i.e. Upstream, Midstream and Downstream sectors) of the Nigerian oil and gas industry. For instance, a company engaged in upstream petroleum operations e.g., the production of crude oil, may also invest in the processing of the associated gas (downstream/ midstream operation). However, with the introduction of the PIB, a company shall not be involved in more than one stream of petroleum operation and would have to register a separate company for each stream of petroleum operations.

Furthermore, a newly incorporated company that is yet to commence the bulk sales or disposal of chargeable oil is now required to file its audited accounts and returns within 18 months from the date of its incorporation.

Ascertainment of Assessable Profits for HT and CIT Purposes

Although a significant portion of the provisions of the PPT Act was imported into the fiscal section of the Bill, the PIB amends several of these provisions as it relates to ascertaining the assessable profits of companies with upstream petroleum operations. The proposed changes include the following:

To ascertain the assessable profits of companies engaged in petroleum operations for CIT purposes, the PIB introduces new provisions to apply to such companies, in addition to the provisions of the CIT Act. For instance, rents and royalties incurred and paid, contributions to abandonment and host community funds, and other deductions that may be prescribed by the Ministry of Finance will be deductible expenses. However, signature bonuses paid for the acquisition of rights, penalties and gas flare fees will not be deductible expenses for CIT purposes.

Based on the above, companies will have to pay particular attention to the computation of their HT and CIT payable, given that certain expenses such as bad debt and bank charges that are not deductible for HT purposes are tax deductible when determining the CIT payable.

Companies engaged in upstream petroleum operations will now be subjected to a dual income tax regime, i.e. the Hydrocarbon Tax (HT) and the Companies Income Tax (CIT). While the applicable CIT rate will be in line with the provisions of the CIT Act, the HT rate will be graduated and dependent on the area of operation and the period the mining lease was granted.

The applicable HT rate as a percentage of the chargeable profit are as follows: 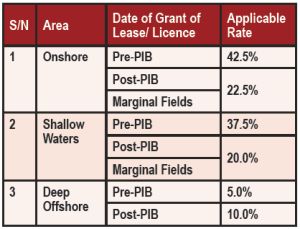 Companies with downstream and midstream petroleum operations will continue to be taxable in line with the provisions of the CIT Act.

Claim of Capital Allowance on Capital Work in Progress (CWIP)

Paragraph 15 of the Second Schedule of the PPT Act (i.e. Extension of meaning of "in use"), which extends the definition of "in use" and serves as a basis for claiming capital allowance on CWIP has been deleted. Consequently, assets classified as CWIP will have to be transferred to the appropriate asset class and put to use for it to be eligible for capital allowance claim.

Other Changes to Capital Allowance Provisions

Taxation of Income Deemed to be Incidental to Petroleum Operations

This suggests that income streams such as interest income, which is typically considered incidental to petroleum operations by some upstream companies and therefore subjected to PPT, will now be liable to only CIT and may not be included in the profits for computing any HT payable. Furthermore, activities such as the operation of facilities to treat crude oil and natural gas have now been expressly included in the definition of upstream petroleum operations and hence, liable to HT.

The PIB expunged the restriction to capital allowance claimable in a given accounting year under the PPT Act. It, however, introduces a Cost Price Ratio (CPR), which restricts the allowable deductions claimable in a given accounting period to 65% of the gross revenues determined at the measurement points, for the determination of the HT payable. Any excess cost not deductible due to the above will be carried forward to subsequent years and any cost not deducted upon termination of upstream operations will be lost. It is however unclear whether the CPR will apply to only deductible expenses or also to capital allowance claimable.

Although the objective of this provision may be to boost revenue collection by government, the cash flow implications for upstream companies may discourage investments, especially given the huge capital outlay required for new projects.

Although most companies operating in these sectors may already be eligible for pioneer status incentive (PSI), which confers the benefits of a tax holiday (amongst others), the associated cost and administrative inconvenience of processing the PSI may make the GUI more attractive.

In calculating the royalty payable, condensates shall be treated as crude oil and natural gas liquids as natural gas. The royalty applicable on crude oil will be based on price and production (calculated on a field basis) as shown below. 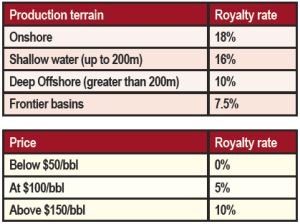 The price based royalty will be payable in addition to the production based royalties. The price levels provided under the price-based royalty shall apply only to the year 2020. At the beginning of 2021 and of each succeeding calendar year, these price levels shall be increased by 2% relative to the values of the previous year.

The royalty rate for natural gas in onshore area is 7.5%, while the rate for every other area and for gas produced and utilized in-country is 5%.

The penalties for defaults or offences committed under the fiscal framework of the PIB increased significantly. For instance, the penalty for non-filing of estimated HT returns, actual HT returns, CIT returns and any offence or default with no specific penalty have been increased from ₦10,000 to ₦10,000,000 for the first day of default, and from ₦2,000 to ₦2,000,000 for subsequent days the default continues, for each offence or default.

The PIB in its current state provides the much needed clarity and incentives in certain aspects, but could unfortunately; deter investors due to the broad restrictions in the deductibility of valid operating expenses. More work needs to be done particularly in this regard, as there is now intense tax competition between countries to attract investors.

Subsequent to the enactment of the Bill, the new fiscal regime will only start to apply to companies already in operation, upon renewal of existing Oil Mining Leases (OMLs) and Oil Production Licenses (OPLs) or the execution of new ones. Therefore, the PPT Act will continue to apply to OMLs or OPLs obtained prior to the enactment of the PIB, until they are renewed. However, the PIB allows companies to adopt the fiscal framework of the PIB prior to the termination, expiration or renewal of the respective OPLs and OMLs, by entering into a conversion contract.

Given the significant changes introduced to the fiscal framework, it is important for companies engaged in petroleum operations to conduct a PIB impact assessment to decide whether to adopt the fiscal regime of the PIB, prior to the due date of mandatory adoption (i.e. expiration and renewal of existing OMLs and OPLs). The affected stakeholders should also engage the relevant authorities to ensure that grey areas or controversial provisions are clarified prior to the passage of the Bill.

2. Large-scale industries that use natural gas as a feedstock such as gas-to-liquid plants, petrochemical industries and fertilizer plants, and mini-LNG plants, power plants and such other industries as defined in regulations.