Ireland: A New Patent System Dawns Over Europe And Presents Opportunities For Ireland

by Marie Walsh
HGF Ltd
Your LinkedIn Connections
with the authors

Major changes to the European patent system will soon be coming into effect with the launch of the Unitary Patent and the Unified Patent Court expected to commence in Spring 2023. These changes will affect granted European patents, as well as new and pending European patent applications. IP owners need to understand the impact of these changes which could potentially bring significant cost savings, but also some risks.

In the author's view, Irish businesses should have access to the same opportunities and risks that the Unitary Patent and UPC present for businesses in any other EU country that is participating in the Unitary Patent and Unitary Patent Court system. Until a referendum is held and, assuming the Irish public vote is in favour of joining the UP and UPC system, Irish Patent owners and applicants for patents are encouraged to review their patent portfolios and consider their protection strategy now, before the UPC system enters into force.

In his haunting and raw tones in "Better days are comin'", my favourite Irish singer, Dermot Kennedy sings of "Waitin' on a train that just won't come". Well, the Unitary Patent and Unitary Patent Court train is now coming but what if it will not stop at the station for Irish businesses to get onboard!

At present, protecting an innovation across Europe requires filing a single patent application at the European Patent Office (EPO) and progressing that application through a process that checks for novelty and inventive step; and after grant, then going through another process of having to validate the granted European patent in each country where protection is required. This is a costly process especially if wide geographic coverage is needed for commercial protection of the innovation across a number of European countries, because each country imposes its own national patent office fees and translation requirements. After this validation process is complete, in effect, the European Patent is "a bundle" of separate, parallel national patent rights, requiring payment of separate annual renewal fees in each country to keep each of those national patents in force.

Because of this, there has long been a goal to provide a single, EU-wide patent right which provides wide geographical coverage at reduced costs. Finally, it looks like the train is coming! and the Unified Patent Court Agreement (UPCA) is expected to come into force in early 2023. This means that a new Unitary Patent (UP) right will be available and the Unified Patent Court (UPC) will open its doors.

A major advantage of the Unitary Patent is the potential savings in validation and renewal fees. Renewal fees for a Unitary Patent are equivalent to the combined fees of the UK, France, Germany and the Netherlands. The cost savings are therefore significant for patents which would have otherwise been validated in several countries. A dis/advantage of the Unitary Patent (depending on which way you look at it!) is that Unitary Patent protection will stand or fall as a single right. A consequence of this unitary nature is also that it will not be possible to drop protection in selected countries. In this aspect, a UP is less flexible than the national patents validated out of the currently granted European patents. 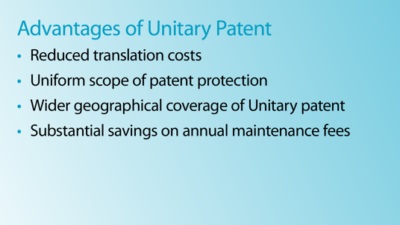 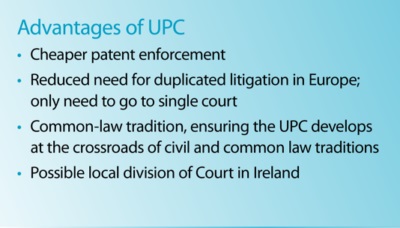 However, Ireland cannot immediately be part of the new system. –As a first step, the Irish Government needs to hold a Referendum to enable Ireland to be part of the new system so that Irish businesses can have the same options for enforcing their patent rights and protecting their innovations as businesses in other EU countries such as France or Germany, for instance, who will be in the system right from its start date. The Irish Government has committed that a referendum will be held by May 2024. In the author's view, this is too late. Irish businesses need the referendum to be held as soon as possible, and assuming that the Irish public will vote "YES", then Irish businesses can have the same options as businesses in any other EU country that will be participating in the new system.

A Unitary Patent will be able to be obtained using the existing process for a European Patent, and will be available for most new applications, including those pending when the UPCA enters into force. Within one month of grant, a UP can be requested which will provide protection across all participating EU countries – at present 17 countries (potentially 24) including Germany, France, Italy and the Netherlands. As a consequence of Brexit, the UK cannot participate, while some EU countries, such as Spain, have (so far) chosen not to participate. To obtain a European patent in non-UPC countries, the current validation process can still be followed. Although Ireland is not going to be in the system from day 1, all existing and future European Patents will be affected by the UPC so Irish companies who own patents need to consider the impact for their IP strategy.

The opportunities and risks that the Unitary Patent and UPC present will need to be balanced against multiple factors, including the geographical protection required, the likelihood of litigation and the IP value. Patent holders and applicants are encouraged to consider their IP strategy now, before the UPCA enters into force.