by Srikanth Vasudevan , Shipra Padhi , Mansi Seth and Rajesh Simhan
Nishith Desai Associates
Your LinkedIn Connections
with the authors
To print this article, all you need is to be registered or login on Mondaq.com.

Recently, on November 07, 2017, the Central Board of Direct Taxes ("CBDT") released a circular1 ("Circular") exempting certain investment funds, including private equity ("PE") and venture capital ("VC") funds from the applicability of the indirect transfer provisions ("ITP") under the Indian Income Tax Act, 1961 ("ITA"). The Circular follows up on the statements made by the Finance Minister while delivering the Union Budget earlier this year for addressing concerns of the PE /VC industry around this issue. Yet it falls short of industry expectations as well as of the ambit alluded to by the Finance Minister in his speech.

Section 9 of the ITA contains provisions under which income, upon the fulfilment of certain conditions, accruing to a non-resident is deemed to accrue in India and is accordingly brought within the Indian tax net. In order to overcome the impact of the Supreme Court of India's ruling in the Vodafone case2, the Finance Act, 2012 amended the aforesaid Section 93 to include ITP with retrospective effect such that if an asset, being a share or interest in a company or entity4 registered or incorporated outside India, derived its value, directly or indirectly, substantially from an asset situated in India, the gains arising from the transfer of such share or interest would be taxable in India.

Due to the expansive scope of and language used in the amended provisions, a number of concerns were raised by stakeholders including FPIs and PE / VC investors, which led to the mandate of the Shome Committee5 being expanded to examine the applicability of the indirect transfer provisions. Thereafter, the Finance Act, 2015 further amended the provisions of Section 9 to incorporate some of the Shome Committee's recommendations. The amendments included the provision of a de minimis threshold for the applicability of ITP, a clarification on the meaning of "substantially derive value" from India and a carve-out for the applicability of ITP vis-à-vis small shareholders.

However, the constant tinkering with the ITP did not address numerous genuine situations, in particular redemptions by offshore funds to distribute gains made from India. In fact, the multi-level taxation arising from literal interpretation of the ITP was highlighted in a circular issued by CBDT in December 20166 ("2016 Circular", a detailed analysis of which can be found here), which alarmed many stakeholders in the funds industry. Several representations were made by the funds industry regarding the harshness of the ITP, as interpreted by the 2016 Circular, and soon after, the CBDT issued a press release7 keeping in abeyance the operation of the 2016 Circular (an analysis of the press release can be found here).

The Finance Minister took note of the concerns in his speech while delivering the Union Budget 2017-18, where he observed as follows:

"In 2012, Income-tax Act was amended to provide for taxation of those transactions of transfer of shares or interest in a foreign entity deriving its value substantially from Indian assets. Apprehensions have been raised about some difficulties which arise because of this provision in case of transfer of stake of investors of India-based funds located abroad but investing in India-based companies.

....In order to remove this difficulty, I propose to exempt Foreign Portfolio Investor (FPI) Category I & II from indirect transfer provision. I also propose to issue a clarification that indirect transfer provision shall not apply in case of redemption of shares or interests outside India as a result of or arising out of redemption or sale of investment in India which is chargeable to tax in India."

Accordingly, via the Finance Act, 2017, investments held in Category I and Category II Foreign Portfolio Investors ("FPIs") were excluded from the ambit of ITP.8 However, Category III FPIs, and PE / VC funds which tend to invest under the foreign direct investment ("FDI") and foreign venture capital investment ("FVCI") routes, continued to remain affected by the ITP. The industry has been expecting clarification in line with the Finance Minister's observations i.e. to not apply ITP to situations where the income is already undergoing a level of taxation in India. In this background, the Circular was issued.

In this regard, the Circular provides that the ITP shall not apply in respect of gains arising to a non-resident on account of redemption or buyback of its share or interest held indirectly in the Specified Funds if (i) such income accrues from or in consequence of transfer of shares or securities held in India by the Specified Funds ("Indian Transfer"); and (ii) such income is chargeable to tax in India.

It is further provided that the above benefit shall be applicable only in cases where the redemption or buyback proceeds arising to the non-resident do not exceed the pro-rata share of the non-resident in the total consideration realized from the Indian Transfer. Also, non-residents investing directly into the Specified Funds shall continue to be taxed as per the ITA. 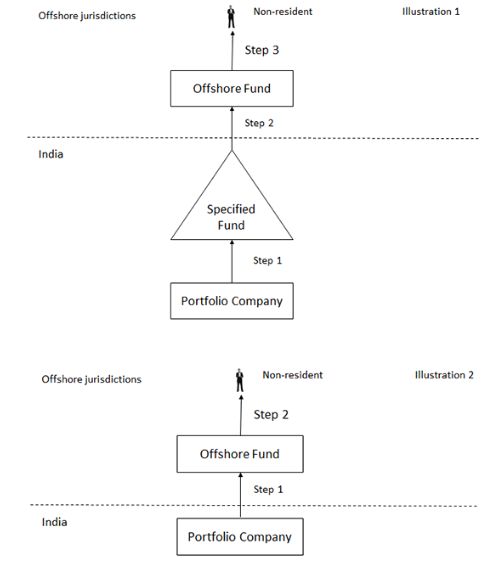 Ambiguity on level of chargeability to qualify for the relaxation

The interpretive crux of the Circular revolves around what can be considered to be income 'chargeable to tax' in India.

If income is not includible in total income on account of specific exemptions under the ITA, would it still qualify as "chargeable to tax"? For example, long term capital gains on sale of listed shares are generally not included in the scope of 'total income' as long as securities transaction tax is paid. Since chargeability under the ITA extends only to total income, it is unclear whether such exempt income would be considered as being "chargeable to tax". Further, if the income tax exemption hinges on the payment of securities transaction tax, it is unclear whether that would make such income qualify as being "chargeable to tax".

The benefit under the Circular is only provided to the extent that the income of the non-resident does not exceed its pro-rata share in the total consideration realized from the Indian Transfer. The rationale behind the introduction of such a condition is uncertain. However, it may affect certain profit sharing arrangements which are commonplace in the funds industry. For example, offshore fund managers often enter into profit sharing arrangements for carried interest, wherein their share in profits may exceed the pro-rata share in terms of contribution. To the extent of such excess, the offshore manager may be subject to ITP if the carried interest distribution is effected through redemption or buyback of the shares or interest. This potential application of ITP to carried interest may affect the structuring of profit sharing arrangements in offshore fund vehicles.

While the issuance of the Circular by the CBDT is significant, the fine print of the Circular leaves a bittersweet aftertaste for industry participants owing to the ambiguous wording, and limited scope. PE / VC funds following standalone offshore or co-investment models continue to be affected. The Circular gives a further push towards unified structures with Indian modules to fund platforms.

Apart from the above substantial issues, on an interpretive front, the Circular creates ambiguities which may need further clarifications – including the ambit of the phrase "chargeable to tax".

5 The Shome Committee was constituted to receive comments and undertake widespread consultations from stakeholders and vet and rework the general anti-avoidance rule ("GAAR") guidelines.

8 The FPI route is the primary route for institutional investments into the Indian listed space. It is regulated by India's securities regulator, the Securities and Exchange Board of India ("SEBI").