In a historic development, on 1 July 2021, 130 countries agreed to a broad framework for solutions to address tax challenges arising from digitalisation of the economy. Importantly, the solution envisaged does not restrict itself to the digital economy and could substantially reform the present international tax framework. This article is the first in a new series where we track the latest developments with respect to this historic global tax deal and its implications for businesses.

Recently, majority member countries of the OECD/G20 Inclusive Framework on Base Erosion and Profit Shifting (BEPS-IF) agreed to the "Statement on a two-pillar solution to address tax challenges arising from the digitalisation of the economy" (Statement). Out of 139 BEPS-IF member countries, 132 countries (which comprise all G20 countries) have agreed to the Statement as of 14 July 2021. This means that India has also joined this important international tax reform.

At a broad level, the Statement reflects a global agreement on significant changes in the existing rules for allocating taxable income of Multinational Enterprise (MNE) groups between countries, and introduction of new rules to ensure that MNE groups pay a minimum level of tax regardless of where they are headquartered or the jurisdictions they operate in. The Statement is substantially based on the two-pillar solution proposed by the OECD Secretariat (OECD Blueprint) in October 2020, albeit with certain changes compared to the OECD Blueprint.

Traditionally, the taxation of business profits has been linked to a physical presence based nexus rule. While this was sufficient in the brick-and-mortar economy, the rapid digitalisation of the economy exposed gaps in such tax rules. Businesses no longer need physical presence to derive economic benefits from a jurisdiction. This has raised concerns for 'market jurisdictions' having the customer / user base, which, in the absence of a taxing right, are not getting their fair share of tax revenues on the income earned by offshore businesses from their territory. While this issue was first identified around two decades ago and being deliberated on since then, this historic deal marks a concrete step in this direction.

Discussions at a global level to address tax challenges arising from the digitalisation of the economy began with the BEPS project in 2013. Until quite recently, reaching global consensus on the OECD's two-pillar approach to international tax reform seemed unlikely and some countries unilaterally started levying Digital Service Taxes to tax foreign businesses operating in the digital economy. Closer home, India implemented equalisation levy (EL) in 2016 and expanded its scope in 2020 to levy tax on non-residents earning income from India through digital means. However, talks gathered pace in recent months with the Biden administration revitalising the negotiations and lending its weight to the two-pillar solution.

Viewed in that context, the Statement is significant as it marks the first agreement among most BEPS-IF members in arriving at a consensus-based solution on taxation of the digital economy.

A timeline of events leading to the Statement is given below.

Main components of the two-pillar solution

The Statement reflects agreement on changes to tax rules that are clubbed into two 'pillars' – Pillar One and Pillar Two. 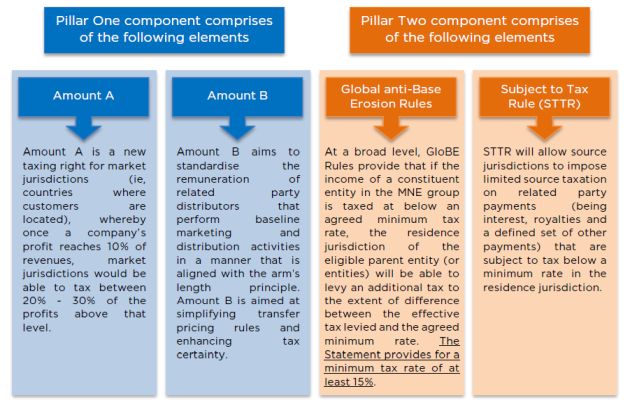 As regards Amount A, a final agreement is yet to be achieved on the exact percentage of residual profits that would be allocated within the agreed range of 20% - 30%. Allied with Amount A is the 'tax certainty' component, whereby MNEs will benefit from dispute prevention and resolution mechanisms of a mandatory and binding nature on all issues related to Amount A.

As regards Pillar Two, it should be noted that the GloBE Rules are essentially based on traditional controlled foreign company (CFC) principles that have already been enacted by various countries.

Businesses expected to be impacted by the two-pillar solution

Businesses covered by Pillar One

Way ahead and manner of implementation

While the Statement indicates agreement among 132 BEPS-IF members on key aspects of the two-pillar solution, an agreement is yet to be reached on certain important issues. This is recognised in the Statement itself, which states that a detailed implementation plan together with remaining issues will be finalised by October 2021.

Also, seven member countries of the BEPS-IF (Ireland, Estonia, Hungary, Nigeria, Kenya, Sri Lanka and Barbados) have not joined the Statement as of date and whether a consensus can be arrived at among all BEPS-IF members would need to be seen. Further, it will be important to keep an eye on whether the US Administration will get US Congress' approval for the two-pillar solution.

1. What is the policy rationale behind introducing Amount A?

Under the present international tax treaty framework, cross-border business profits are taxable in the source country provided a taxable presence by way of a Permanent Establishment (PE) exists in the source country. Therefore, income of businesses which operate without any physical presence in market jurisdictions such as technology companies remains largely outside the tax net of such jurisdictions. In response, certain countries have introduced unilateral measures in recent years which bypass the existing tax treaty framework. Such unilateral measures would unlikely be feasible in the long-run due to threats of retaliation by treaty partner countries and dangers of escalation to a trade war, necessitating a consensus-based solution.

Further, developing countries have argued that attribution of profits under the present international tax framework only considers the location of supply factors such as functions, assets and risks. It is contended that the location of demand factors, ie, the consumer, should also be given weightage while attributing profits to a jurisdiction.

To address the above issues, Amount A allocates the taxing rights over certain profits of large MNE groups to market jurisdictions even when there is no physical presence of an MNE group.

2. Will all market jurisdictions be allocated Amount A?

The Statement provides for 'nexus rules' to determine entitlement of a market jurisdiction to an Amount A allocation. The nexus rules essentially provide that –

3. What happens if the residual profits of MNEs are already taxed in a market jurisdiction?

4. Will Digital Service Taxes and Amount A co-exist?

The Statement provides that all Digital Service Taxes and other relevant similar measures on all companies will be removed. Therefore, it is possible that India's EL will not be applicable upon implementation of Amount A.

5. How will Amount A work in practice once In-scope MNE groups are identified?

6. Will all constituent entities of an In-scope MNE group be required to undertake filings related to Amount A?

The Statement provides that tax compliance will be streamlined (including filing obligations) and In-scope MNE groups will be allowed to manage the process through a single entity. Further, the 'tax certainty' component of Pillar One is expected to reduce the potential for disputes through setting up of mandatory and binding dispute prevention mechanisms.

1. How will the GloBE Rules work in practice?

2. What is the scope of STTR and how will it work?

India's position on the two-pillar solution

A day after agreeing to the Statement, India's Ministry of Finance issued a Press Release stating that while India is in favour of a consensus solution, the solution should result in allocation of meaningful and sustainable revenue to market jurisdictions, particularly for developing and emerging economies. This was reiterated by India's Finance Minister in her remarks at the recent G20 Finance Ministers and Central Bank Governors meeting.

Notably, the Press Release mentions that some significant issues that remain open and need to be addressed include the share of profit allocation and scope of STTR. Therefore, one can expect that India would negotiate for a final agreement that allocates residual profits on the higher side within the 20% - 30% range agreed for Amount A, and provide for a wider scope of payments that would be subject to STTR.

At the outset, MNE Groups should evaluate if they would meet the threshold requirements outlined for Amount A and the GloBE proposal. While the Amount A proposal on profit reallocation is unlikely to impact many MNE groups considering the high thresholds, Pillar Two proposals will cover various MNE groups if the proposed thresholds are adopted.

In the Indian context, Pillar Two proposals are likely to have a significant influence on outbound investment structuring. Therefore, MNE groups should keep these proposals in mind while setting up outbound investment structures over the coming months. Last but not the least, developments in this area must be closely watched considering their significant impact on the global international tax architecture.