India: Trend Of IP In India And Introduction Of Indian Patent Office As An International Searching Authority

The IP transactions in India are at its peak. Numerous worldwide patent filings are recorded in the past 2017 year. From pharma giants to the largest automobile companies, information technology to the electronic companies, all have established IP portfolio worldwide. From the recent survey it can be seen that the foreign companies have huge footprint in the Indian IP landscape. The top applicants for patents filings in India are QUALCOMM, General motors, Phillips, LG, Samsung etc. With an increase demand in research and development globally, the foreign companies turned themselves towards need of IP protection. This trend of IP protection is not only adopted by the foreign companies but many Indian Startup and Technology Incubators have sown interest in Patent protection. Patent filings by the Indian applicants in every year are growing with a rate of about 11.6%, where as foreign applicant filing growing at a rate of about 31.7% since 2016.

The patent filed by the Indian firms lag behind substantially as compared to foreign counterparts. We believe that the trend in patent filing by the Indian companies is not a good signal to advance our Indian economy, however with over a span of time ratio of Indian filing will compete with the foreign filings. In India, Council of Scientific and Industrial Research has topped the list of holders of Indian patents.

This infographic gives you a snapshot of key applicants13 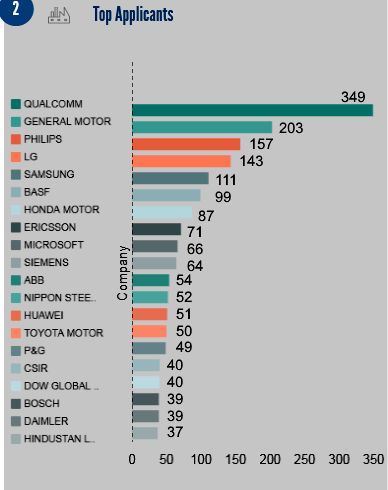 The statistical data published by WIPO disclose that the number of patent applications filed in India has witnessed a steady growth and has plateaued in the recent past. Pharmaceutical patents are ranked second with respect to the volume of applications but are still a fraction of pharmaceutical patents filed worldwide. A study of the patenting trends is important to evaluate the current process in the Industry. In terms of pharmaceuticals, it is important as the industry is focused on manufacturing life-saving drugs which are often patent protected, providing the innovator an opportunity to commercially exploit their research products without any competitor product during the life-time of the patent. The Indian companies though, are leaders in the generic drug industry, wherein they enter the market after the life time of a patent, but it still provides them an opportunity to exploit the market by adding certain unique features to the drug product and exercise monopoly over that particular feature. An economical process for making a new drug formulation, change in dosage regimen and new form of drug delivery are all examples of patents that bestows commercial advantage to a patent holder ever after the expiry of the innovator patent.

ARTICLE TAGS
India Intellectual Property Patent
POPULAR ARTICLES ON: Intellectual Property from India
A Study On: Novartis AG v. Union Of India
Khurana and Khurana
Intellectual property is an intangible form of property while a ‘Patent' is a subset of intellectual property.
Assignment And Licensing Of Copyright
S&A Law Offices
Copyright is a protection given to the creators of certain types of works as an acknowledgment to their intellectual input
Difference Between Passing Off And Infringement Of The Trade Mark
Khurana and Khurana
A Trade mark may be defined as a lawfully protected abstract, word, symbol, color, mark, slogan or a mixture of those related to an organization or a selected product that differentiates it from the others accessible within the market.
Patent Law in India
Anand & Anand
The Patents Act 1970, along with the Patents Rules 1972, came into force on 20th April 1972, replacing the Indian Patents and Designs Act 1911. The Patents Act was largely based on the recommendations of the Ayyangar Committee Report headed by Justice N. Rajagopala Ayyangar. One of the recommendations was the allowance of only process patents with regard to inventions relating to drugs, medicines, food and chemicals.
Patent Infringements And Their Types
S&A Law Offices
Patent is one of the most important forms of Intellectual Property (IP). The term of a patent is typically 20 years from the Priority date of the application.
Compulsory Licensing In India
Khurana and Khurana
WIPO defines patent as an exclusive right granted for an invention, which is a product or a process that provides, in general, a new way of doing something, or offers a new technical solution to a problem
FREE News Alerts
Sign Up for our free News Alerts - All the latest articles on your chosen topics condensed into a free bi-weekly email.
Register For News Alerts
Article Tags
India Intellectual Property Patent
Similar Articles
Powered by mondaq AI
MATCH
86%
Indian-Patent Office In Top 10 As An ISA Among 22 ISAs S.S. Rana & Co. Advocates
71%
Cooperation Agreement Signed Between The Indian Patent Office And WIPO Clyde & Co
70%
Mining Patent Information In India S&A Law Offices
69%
Updates From The Intellectual Property Office India LexOrbis
68%
How To Conduct Patent Search In India? Intepat IP Services Pvt Ltd
Related Articles
CGPDTM'S Notice For Streamlining The Trade Marks Show- Cause Hearings Through Dynamic Cause List S.S. Rana & Co. Advocates
Cause Of Action And Determination Of Jurisdiction In Intellectual Property Rights Cases In India Vaish Associates Advocates
What Cannot Be Protected Under The Trade Marks Act S.S. Rana & Co. Advocates
The New Age Infringers: Delhi High Court Tackles Online Counterfeits S.S. Rana & Co. Advocates
Royalties For Recordings Are A Live Issue TMT Law Practice
Mondaq Webinars
The New Swiss Data Protection Act - What You Need To Know
FABIAN PRIVACY LEGAL GmbH
Navigating the AI Legal Landscape
INQ Law
More Webinars
Comparative Guides
Alternative Investment Funds
Artificial Intelligence
Aviation Finance
Aviation Regulation
Blockchain
More Guides
Mondaq Advice Centres
India
Trademarks
India
Arbitration, Litigation and Conciliation
India
Insolvency
Global
Trademarks in SAARC Countries
More MACs
Curated Content
Fast Tracking Through The Patent Prosecution Highway In India
Obhan & Associates
Divisional Applications And Plurality Of Invention In India
Obhan & Associates
Do Scientific Publications Exempt Patent Applications From Anticipation?: The Indian Position
Obhan & Associates
Preparing For Invention Disclosure Meetings: A Guide For Inventors
Obhan & Associates
Patenting 3d Bioprinting In India
Obhan & Associates
Upcoming Events
Managing Intellectual Property Disputes
WilmerHale
Panel Bengaluru India
Mondaq Social Media