by Anand Pratap Singh
S&A Law Offices
Your LinkedIn Connections
with the authors
To print this article, all you need is to be registered or login on Mondaq.com.

Loss of profit was first given as a concept in Robinson v. Harman,1 where it was held that the plaintiff is to be placed at the same position as he would have been, had the contract been performed by the defendant. This basic principle, also known as reinstatement, is generally followed by courts and tribunals while dealing with claims of loss of profit.

One of the landmark judgement in India that deal with loss of profits is the one of Brij Paul & Bros. v. State of Gujarat.2 It was held that in works contract, where the contractor suffers a loss on account of breach by the employer, he is entitled to claim compensation for the expected profit of the balance of work. However, the most important judgement that sets the tone of India's legal jurisprudence is Bharat Coking Coal Ltd. v. L K Ahuja.3, where it was held by the Supreme Court that in absence of any proof or evidence of loss of profit or possibility of alternate use, compensation for loss of profit cannot be provided. The relevant para of the judgement is mentioned hereunder:

"It is not unusual for the contractors to claim loss of profit arising out of diminution in turn over on account of delay in the matter of completion of the work. What he should establish in such a situation is that had he received the amount due under the contract, he could have utilized the same for some other business in which he could have earned profit. Unless such a plea is raised and established, claim for loss of profits could not have been granted. In this case, no such material is available on record. In the absence of any evidence, the arbitrator could not have awarded the same." (Para 24)

Although this case did not provide for compensation of losses, it nonetheless led to an important inference that if such evidence is produced before the court, then compensation for losses may be granted.

In Himachal Joint Venture v. Panilpina World Transport4 it was stated by the arbitrator that the law is well settled that if a breach has been committed by a party then the injured party should be compensated for the deprivation of his profit. The breach in this case was committed by the respondent by illegally terminating the contract. It was the respondent who did not allow the claimant to perform his part of the contract, while the claimant had been ready and willing to carry out and to execute the contract. Therefore, the claimant was held entitled to expect profit which he would have earned had the respondent allowed the contract to be executed. The percentage allowed for the compensation was 10% and the reasoning was approved and upheld by the Delhi High Court.

In National Highways Authority of India vs. Hindustan Construction Company5 the hon'ble Division Bench of Delhi High Court observed that a claim for loss of earning capacity and profit is entirely different. It means that the manpower, plant and machinery used at the site by the contractor during extended period of contract disabled the contractor to use the same for another contract and it is loss of profit of that other contract which has to be recompensed and an extracted quote from Hudson's Building and Engineering Contracts is as under:

"When delay in completion of the whole project results, a contractor will usually suffer – a loss of the profit earning capacity of the particular contract organization affected, due to its being retained longer on the contract in question without any corresponding increase in the monetary benefit earned and without being free to move elsewhere to earn the profit which it otherwise might do."

FORMULA FOR CALCULATION OF LOSS OF PROFIT AND OVERHEAD

There are three popular formulae which calculate loss of profit along with loss of overhead. They are the Hudson formula, the Emden formula and the Eichleay formula.6 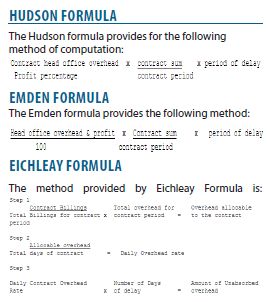 In M.N. Gangappa v. Atmakur Nagabhushanam Setty & Co,7 it was held that the method used for computation of damages will depend upon the facts and circumstances of each case. The court held so following the landmark English judgement in Lavarack v. Woods of Colchester Ltd.8

In McDermott International Ltd v. Burn Standard Co. Ltd.9 the award for loss of profit was challenged on the basis that instead of using the Hudson formula, the Emden formula was used. In this regard, the hon'ble Supreme Court held:

"...it is an accepted position that different formulas can be applied in different circumstances and the question as to whether damages should be computed by taking recourse to one or the other formula, having regard to the facts and circumstances of a particular case, would eminently fall within the domain of the Arbitrator. If the learned Arbitrator, therefore, applied the Emden Formula in assessing the amount of damages, he cannot be said to have committed an error warranting interference by this Court." (Para 69)

In McDermott Case10, the hon'ble Supreme Court specifically dealt with the method for computation of damages. The court prefaced its discussion with the remarks, "In the assessment of damages, the Court must consider only strict legal obligations, and not the expectations, however reasonable, of one contractor that the other will do something that he has assumed no legal obligation to do." The court then explained each of the formulae commonly adopted. The court noted the criticisms of the Hudson's formula observing that "it adopts the head office overhead percentage from the contract as the factor for calculating the costs and this may bear little or no relation to the actual head office costs of the contractor." The Emden formula which has received judicial support in a number of cases has the advantage of using the "contractor's actual head office and profit percentage rather than those contained in the contract." The Eichleay formula is used "where it is not possible to prove loss of opportunity and the claim is based on actual cost." The court did not endorse any one particular formula since "it is an accepted position that different formulas can be applied in different circumstances and the question as to whether damages should be computed by taking recourse to one or the other formula, having regard to the facts and circumstances of a particular case, would eminently fall within the domain of the arbitrator." What is significant as far as the above discussion is concerned is that it is only concerned with the application of formulae and not whether the formulae would apply notwithstanding there is no proof of the contractor having suffered overhead charges or loss of profit.

It is important to mention here that Central Public Word Department has adopted 7.5% as a contractor's profit in Analysis of Rate of various items to work out estimated cost and justification of rates. And as per MORT&H Standard Data Book11 the contractor's profit is 10% of cost of work.

It is not unusual for the contractors to claim loss of profit arising out of diminution in turnover on account of delay in a matter of completion of work. In that event the contractor should establish that had it received the amount in terms of the contract, the contractor could have utilized the same for some other business in which he could have earned profit. Unless such a plea is raised and established, the claims for loss of opportunity/profit could not be granted. A loss of profit earning capacity of the particular contract organization affected, due to its being retained longer on the contract in question without any corresponding increase in the monetary benefit earned and without being free to move elsewhere to earn the profit which it otherwise might do, shall be ground for compensation. Further, the additional costs or compensation as per the Indian Contract Act may include the loss of profit which as per the arbitral tribunal is payable under the laws of India and the said conclusion was derived by applying the principles of Section 73 and 55 of the Contract Act to the additional costs. Loss of profit is an important concept that lies at the very heart of contracts and transaction between parties, for the reason that a breach of contract can have far reaching consequences. Although the remote and unforeseeable consequences have been carefully disallowed by the court, it has nonetheless been made sure that the direct consequences be compensated. The court and arbitral tribunals have through the years, worked on the same principles and have thus made sure that the losses resulting out of breach of contract do not go unaddressed.

11 STANDARD DATA BOOKK FOR ANALYS:S OF RATES (First Revision) Published by Indian Roads Congress On behalf of the Government. Of India, Ministry of Road Transport &Highways