India: Beacon Of HOPE For The Planet – Convention On Biological Diversity ! Is India Aligned To The Convention?

The Convention on Biological Diversity, which was signed by 150 country leaders at the Rio Earth Summit in 1992, is committed to encouraging sustainable development. The Convention recognises that biological variety is about more than plants, animals, and microorganisms and their ecosystems; it is about humans and our need for food security, medicines, clean air and water, shelter, and a healthy environment to live in.

1.1 Primary Goals of the Convention on Biological Diversity

The primary goals of CBD are mentioned as below:

1.2 Summary of key aspects of The Convention  2

The text of the Biodiversity Convention contains 42 Articles and 3 Annexes. Following is the summary of important articles:

Article 13 of the Convention addresses public education and awareness through promotion, cooperation, and encouragement to comprehend the significance of biological variety conservation.

Article 17 stipulates that the parties shall encourage the interchange of information from all publicly accessible sources.

Directly or indirectly, the Biodiversity Convention attempts to encompass all potential realms. It addresses biotechnology and the distribution of its benefits under Article 19.

Article 31 grants each contractual party one vote. It further stipulates that regional economic integration organisations can exercise their voting rights with the same number of votes as their member states, which are the contracting parties.

Article 26 discusses the settlement of conflicts through negotiation, and if the parties are unable to reach an agreement, they may seek mediation. During the process of ratifying, accepting, approving, or acceding to the convention, a state or regional economic integration organisation may declare its acceptance of any of the following methods of dispute settlement if it is unable to reach an agreement through negotiation or mediation:

Article 41 states that the Secretary-General of the United Nations shall serve as Depositary of this Convention and any additional protocols. 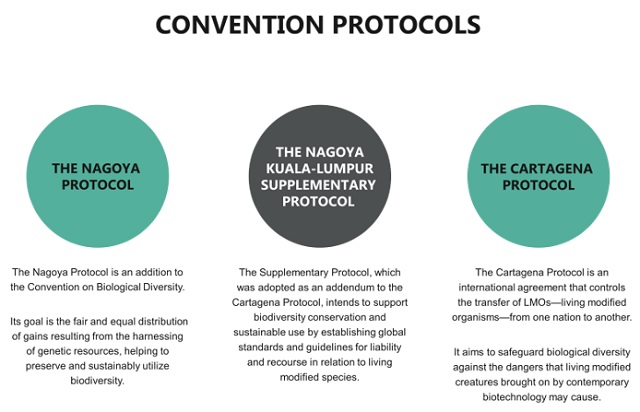 2 What is the Conference Of Parties (COP) ?

Its first ordinary meeting took place in Nassau, Bahamas, from November 28 to December 9, 1994, with the theme "Guidance to the financial mechanism; Medium-term work programme."

The first portion of the 15th meeting of the COP was conducted in Kunming, China, from 11 to 15 October 2021. Part two of the same event was held in Montreal, Canada, in December 2022.

The Conference of the Parties has established a number of thematic programs that correspond to some of the world's most important biomes. These programs set a vision and guiding principles for future endeavours. In addition, they define essential factors, prospective outcomes, and a timetable for accomplishing these objectives. The conference of parties and the SBSTTA review these work programmes' implementation.

The 20 targets, commonly known as the Aichi Targets, are part of the strategic plan's shared vision, mission, strategic goals, and objectives. It acts as a flexible framework for setting regional and national goals. Additionally, it encourages the cogent and successful implementation of the Biodiversity Convention's goals. 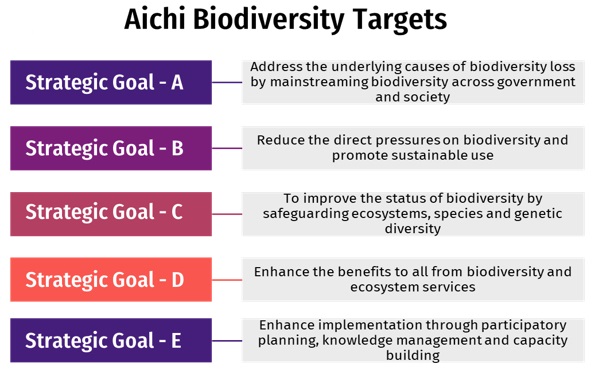 The next global biodiversity framework is being prepared by the open-ended working group. It is anticipated that it will be accepted during the UN's second phase.

A set of guiding principles, an organisational structure, and a thorough consultation process are all included in the process that Parties used to create the post-2020 global biodiversity framework, which includes provisions for global, regional, and thematic consultation meetings. On July 12, 2021, the first version of the post-2020 global biodiversity framework was made public. The 2050 Vision for Biodiversity is reflected in the framework's four long-term objectives. There are 21 concrete goals that must be accomplished by the year 2030, following the draught The Convention on Biological Diversity's support mechanisms, such as the financial mechanism, and strategies for resource mobilisation, capacity-building and advancement, scientific and technological cooperation and technology transfer, knowledge management, as well as through pertinent mechanisms under other agreements and international processes, will be used to facilitate the implementation of the framework and the achievement of its goals and objectives.

The Convention on Biological Diversity (CBD) required, as a first significant step, the development of the National Policy and Macro Level Action Strategy (1999). This strategy called for the consolidation of existing biodiversity conservation programmes as well as the initiation of new steps that were in line with the spirit of the Convention. This was followed by the execution of the NBSAP Project (2000-2004) which provided micro-level action plans appropriately combining crosscutting problems and livelihood security concerns. 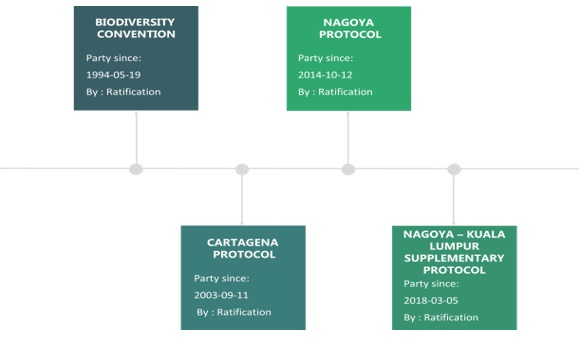 After the Convention on Biological Diversity (CBD) was ratified and after extensive consultations, India also enforced the Biological Diversity Act in 2002 and notified the Rules in 2004. These actions were taken to give effect to the provisions of the CBD, including those relating to the third objective of the CBD, which is access and benefit sharing (ABS). The government of India was one of the very first in the world to implement legislation along these lines. According to the provisions for decentralised governance found in the Constitution, the Act is to be executed through a three-tiered institutional framework: the National Biodiversity Authority (NBA), the State Biodiversity Boards (SBBs), and Biodiversity Management Committees (BMCs) at the municipal level.

India's attempt to realise the goals enshrined in the United Nations Convention on Biological Diversity (CBD) 1992, which recognises the sovereign power of the states to choose their own Biological Resources, gave birth to the Biological Diversity Act in the year 2002. This act was a result of India's attempt to realise the goals. The purpose of this Act is to ensure the preservation of biological resources, to manage their use in a manner that is compatible with long-term sustainability, and to enable local communities to participate in the fair and equitable distribution of benefits stemming from the utilisation and knowledge of biological resources. The Act forbids the following operations without the previous authorisation from the National Biodiversity Authority:

The Act called for the establishment of a three-tiered regulatory system to govern access to biological resources:-

In order for these authorities to undertake any research project dealing with the natural resources of the nation, the Act grants them access to special funding in addition to their own allocated budget. It is responsible for overseeing any use of biological resources as well as the use of these resources in a sustainable manner.

Additionally, it is responsible for exercising control over financial investments as well as their return and the appropriate disposal of funds. In accordance with the Act, the Central Government, in cooperation with the NBA, is required to:

The Biological Diversity (Amendment) Bill, 20215, was tabled in Lok Sabha in December 2021 and afterwards referred to a Joint Parliamentary Committee.

The Bill aims to encourage farmers to grow more therapeutic plants. These goals must be met without jeopardizing the goals of the United Nations Convention on Biological Diversity.

The Act is the sole piece of legislation that exists to safeguard the natural resources of the country. It is a comprehensive piece of legislation in the sense that it safeguards India's natural resources, including its flora and wildlife as well as the indigenous knowledge linked with such things. It is intended for conservation, the usage that is sustainable, and the equal distribution of benefits.

On December 20, 2021, the Biodiversity Amendment Bill, 2021 was sent to a Joint Parliamentary Committee (JPC), which has been tasked with analysing the bill's provisions and presenting its findings and recommendations during the budget session of parliament scheduled for 2022. It has been brought to the attention of the JPC that the Ministry of the Environment has provided a partial answer to the multitude of issues that have surrounding the design and execution of the law. However, this also presents an opportunity for the JPC to carry out an in-depth examination of the long-standing gaps in India's BD regime and determine how those gaps need to be reconciled with international standards, particularly those that are outlined in the CBD and the agreements that it has established.

Equally as crucial is the recognition that the preservation of biodiversity is inextricably linked with other major global concerns over climate change, food security, and public health.

The Committee has the potential to do what the Ministry of the Environment has not been successful in accomplishing so far, namely, making the legislation on biodiversity a people's law and its conservation a popular political concern. The Biological Variety Act is a ground-breaking and forward-thinking piece of legislation that has the potential to favourably benefit the country's efforts to conserve its biological diversity.