by SKP
SKP Business Consulting LLP
0 Liked this Article
To print this article, all you need is to be registered or login on Mondaq.com.

With an evolving transfer pricing law in India, certain issues like Advertisement, Marketing and Promotion (AMP), continue to trigger arguments amongst the taxpayers and revenue authorities, which give way to unending debates. In this issue, we cover the latest judgment, which has deleted the AMP adjustment and has disregarded AMP as an international transaction. While the debates continue, the industry still awaits the verdict of the Apex court to put the AMP issue to rest, and expects guidance on the approach to be followed for the arm's length price determination.

Apart from this, the other rulings are targeted on the issue of guarantee fee transaction and intragroup/management fee transaction. In this edition, under the India Updates, we bring you the notification released by CBDT, (apex Tax body in India) providing due date for undertaking Country by Country Report compliance (CbCR). This notification is applicable in cases where there has been no arrangement for automatic exchange of information between India and the country of the ultimate parent or where there has been a systematic failure in exchange of information.

Facts of the case The taxpayer is a subsidiary of PepsiCo Inc. USA and is mainly engaged in the business of manufacturing soft drink/juice-based concentrates, and other agro-based food products.

The taxpayer had obtained a nontransferrable, royalty-free license from its Parent company in US, (Associated Enterprise (AE)) for the technology to manufacture the concentrate and to use and exploit the brands owned by the said AE in the regions designated to the taxpayer.

Approach of the tax authorities The tax authorities, while accepting the related party transactions to be at arm's length, made a significant adjustment towards the AMP expenditure of the taxpayer, citing the observation that the expenses must have been incurred at the behest of the AE for promoting the brand owned by the AE.

The Trademark License agreement between the taxpayer and its AE empowered the latter to approve and review the advertisement proposed to be telecasted in India. Further the AE was also recovering some part of the AMP expenditure (pertaining to the worldwide sponsorship rights) from the taxpayer. Thus the tax authorities alleged that there was an "action in concert" between the taxpayer, and it's AE, which constituted an international transaction as per section 92F of the Income Tax Act, 1961 (the Act).

The Ruling of the Income Tax Appellate Tribunal (ITAT) The Tribunal pronounced its ruling in favour of the taxpayer by placing reliance on various rulings and deleted the adjustment proposed by the lower tax authorities.

Whether AMP expense is 'international transaction' The Tribunal held that if one of the parties (taxpayer in this case) by its own volition is incurring any expenditure for its business purpose, and there is no binding obligation on the other party (AE), either by way of an oral or written arrangement, then it cannot be characterized as an 'international transaction' within the scope and definition of Section 92B of the Act.

Whether huge AMP spends by taxpayer benefit the AE The tribunal held that the taxpayer thoroughly enjoys all the rewards for AMP functions and the returns associated with the commercial exploitation of the brand. Therefore, under Functions, Assets and Risk analysis also, no such benefit from the AMP expenditure having any bearing on the profits, income, losses or assets has accrued to the AE or any kind of benefit has arisen to the AE.

Considering that the brand developed in India will only help in the promotion of sales in India and not in the jurisdiction of the other AEs, the Tribunal held that AMP spends by the taxpayer did not benefit the AE.

Whether the use of Bright Line Test (BLT)/Profit Split Method (PSM) and any other method for benchmarking AMP expense is appropriate The Tribunal placed reliance on the High court ruling in the case of Maruti Suzuki and rejected the use of BLT, both for determining the existence of an international transaction and also for benchmarking the transaction.

Furthermore, the Tribunal also rejected the use of Profit Split Method and other methods for benchmarking the transaction of AMP.

As the matter relating to TP adjustments on account of AMP expenses, is pending adjudication before the Supreme Court, the tax tribunals in India (including this case) are placing heavy reliance on two landmark judgments (i.e., Sony Ericsson and Maruti Suzuki) in the context of Marketing intangible. The fate of these two landmark judgments and perhaps many others, will be determined once the apex court in India provides its judgment.

The Tribunal in this case has given due weightage to the factual aspects and data submitted by the taxpayer. Accordingly, it is critical to have adequate data/facts/figures, such as sales growth, Function, Asset and Risk profile of the taxpayer and the AE, etc., as proof to substantiate the benefits received by the taxpayer.

Furthermore, analysis of the intercompany agreement is critical while studying AMP functions performed, if any, by the Indian subsidiary of a multinational group. Therefore, it is advisable to review the terms of the inter-co agreement as well, which captures the true substance of the business arrangement and intensity of functions to be carried out.

Facts of the case The taxpayer, Glenmark Pharmaceuticals Ltd., is engaged in the business of manufacturing and marketing pharmaceutical products and related R&D activities.

Approach of the tax authorities Tax authorities adopted a guarantee fee rate of 3% on the basis of the guarantee commission rates charged by the banks and proposed an adjustment of INR 115.1 million.

The Ruling of the Income Tax Appellate Tribunal (ITAT)

However, in appeal, the Tax Tribunal rejected the tax authorities' use of naked quotes of bank guarantee rates for benchmarking corporate guarantee. The Tribunal explained that in Bank Guarantee, the customer could recover the default amount from bank and the bank, in turn, could recover the same from the customer. As against this, in corporate guarantee, failure to honor the guarantee may attract corporate laws, but from a risk perspective, it is not comparable to a bank guarantee. Thus, the Tribunal relying on various rulings on guarantee commission, including Everest Kanto Cylinders Ltd4, held that guarantee commission rates charged by the taxpayer were reasonable, and the bank guarantee rates cannot be adopted.

The judgment of the High Court Thereafter, the High Court also confirmed the Tribunal's view as no distinction in facts and/or law had been brought on record warranting a different view from what was held in the case of Everest Kento Cylinders Ltd.

The judgment of the Supreme Court

In further appeal before the Supreme Court (SC), SC rejected reopening of the appeal, stating that the issue has been rightly decided by the High Court in favor of the taxpayer. SKP Comments

The issue of corporate guarantee is one of the frequent contentious issues in the battleground of TP litigation.

During TP audits, tax authorities have often used external comparable guarantee rates provided by banks as the comparable uncontrolled price for benchmarking the guarantee fees transaction. However, at the Tribunal level, bank guarantee, commonly referred as 'naked guarantee,' has been differentiated from that of 'corporate guarantees.' It has been held that 'naked quotes' need to be adjusted for factors such as risks, functions, term, period, etc., and cannot be directly compared to corporate guarantee transactions.

Facts of the case A taxpayer, a subsidiary of Jabil (Mauritius) Holding Limited, Mauritius, was engaged in assembling printed circuit boards for set-top boxes. The associated enterprise (AE) provided support function (including IT Support services and non-IT services) to the overall group and then allocated the same based on pre-determined allocation keys. The taxpayer had received, from its AE, corporate support services and business development support services and at the same time had provided certain services to its AEs.

The Ruling of the Income Tax Appellate Tribunal (ITAT)

The Tribunal set aside the orders of lower authorities and deleted the TP adjustment by relying on Mumbai High Court ruling in the case of M/s Maersk Global Services Centre. The ruling of the ITAT is provided below:

In the above case, the Tribunal accepted foreign accountant's certificate (CPA) as valid evidence to justify the cost allocation key for intragroup services. Hence, in addition to the need benefit test documents,, one can also place reliance on such evidence (like CPA certificate) as valid documentation u/s 92D of the act.

India had adopted the provisions of Country by Country Reporting (CbCR) in keeping with the OECD's BEPS Action Plan 13, and then introduced the section 286 in its local law. As per these regulations, the constituent entities of a Multinational group were required to comply with the provisions and furnish the CbCR. This CbCR was required to be filed in the jurisdiction of the ultimate parent/any other entity designated to be the alternate reporting entity of the group.

Section 286 also refers to the compliance requirement for cases wherein the country of the ultimate parent had not signed any Multilateral Competent Authority Agreement (MCAA) on the exchange of CbCR with India (e.g., US-based groups). In such cases, where no alternate reporting entity has been designated by the group, the onus of filing CbCR is shifted to the Indian subsidiaries of the group.

Thus, in certain cases where the obligation to furnish the CbCR rested on the Indian entity, due to certain conditions being met, there was ambiguity in terms of the deadlines for filing of such CbCR by Indian entities, as the same was not yet prescribed for FY 16-17 as well as FY 17-18 compliance. Recently, on 18 December 2018, the CBDT issued its notification wherein the timelines for furnishing the CbCR report were provided in the below scenarios:

As per the notification, the CbCR due date for the group, following a reporting accounting year that ended on December 2017, was 31 December 2018. Furthermore, the CbCR filings for the year ended December 2016 had already lapsed by the time this notification was issued.

In view of the above limitation and considering that the taxpayer would need to face hardship in complying within a short notice, the CBDT issued a yet another notification dated 26 December 2018, extending the prescribed deadlines for filing CbCR, as a one-time measure. 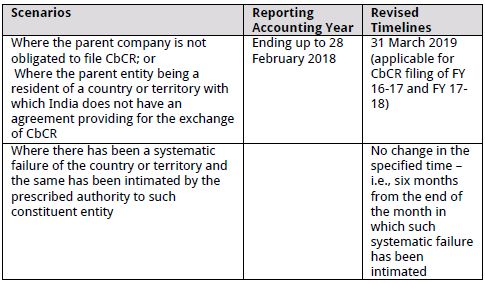 This extension of deadline till 31 March 2019, comes as a big relief to all such taxpayers, which were obligated to undertake CbCR filing in India.