Major law firms in Madrid grew in the last year with transactional activity driving healthy increases in revenue – however fee pressure persists, while the 'war for talent' escalates.

Madrid's leading law firms have prospered in the last year. Some of the major players achieved growth of almost 10 per cent in the last 12 months as they benefited from increased transactional activity, as well as a healthy volume of work related to capital markets, real estate, insolvency, litigation, restructuring, tax and renewables. Meanwhile, the outlook for many law firms in the coming year is promising, with M&A workflow expected to remain decent and more consolidation expected in the banking sector.

However, there are some clouds on the horizon – some lawyers say Spain's prolonged political wrangling is affecting investor confidence, while others lament the continued pressure on fees and the affect on profit margins. In addition, the 'war for talent' is one of the biggest challenges law firms face as they seek to motivate a new generation of lawyers whose career expectations differ from their predecessors.

There is considerable optimism among some Madrid lawyers about Spain's economic prospects. It is anticipated that the Spanish economy will expand by 2.7 per cent in 2016 and economists say that, if such predicted growth is realised, Spain will be one of the Eurozone's fastest growing nations, outdoing the likes of Germany and France, as it did in 2015. Meanwhile, household consumption is at a reasonable level due to low oil prices, low interest rates and reductions in income tax.

However, on the other hand, Spain's public deficit was around 5 per cent in 2015, while the fact that the country will have its second general election within a year in June has been viewed as having a negative impact on the economy. Uría Menéndez managing partner Luis De Carlos says that, while Spain has one of the fastest growing economies in Europe and is on course to create 400,000 jobs in 2016, there is wider uncertainty due to "global economic instability and the possibility of Brexit". He adds that, while the country's economy is recovering, the recovery is "losing some speed". De Carlos says Uría Menéndez enjoyed a "very good year" in 2015 with revenue growth of more than 9 per cent.

Among the major issues facing Spain is corruption, according to Baker & McKenzie's Spain managing partner José María Alonso. He adds that, consequently, there is demand for legal advice relating to compliance and white collar crime issues. Alonso adds that arbitration is a growing area as there will be more energy-related disputes. In addition, he says that there will be more cases concerning real estate-related white collar crime. 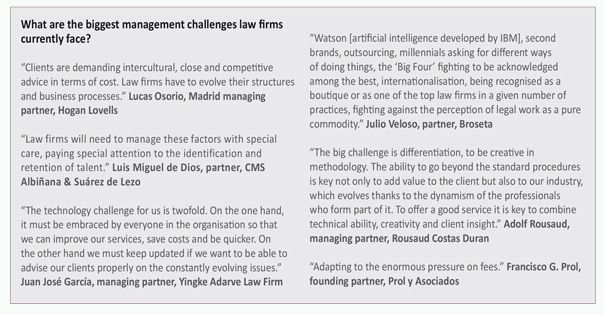 There are a lot of opportunities for Madrid's law firms, according to Cuatrecasas, Gonçalves Pereira partner Fernando Bernad. "Banks need to clean up their balance sheets and political changes [due to the forthcoming general election] could bring about further structural reforms," he says.

Ashurst's Spain managing partner María José Menéndez says that banks are "under pressure to do business at a particular margin" and consequently there will be opportunities for law firms as banks look to fintech and the distribution of new products. She adds: "There will be another round of consolidation in the banking sector."

Linklaters' Madrid managing partner Iñigo Berricano has an optimistic outlook in terms of prospects for the coming year. "It wasn't looking very good in September, but investors have overcome their political concerns – the IPO of Telepizza, for example, was linked to good consumption forecasts," he says. "A lot will happen in the banking sector, there will be M&A deals and also restructuring as there are companies that still have issues – some companies will continue with the disposal of non-core assets and there are funds that still show interest in the country."

Luis Fernando Guerra, managing partner of Deloitte Abogados, says the prospects for the Spanish economy are "much better than they were a year and a half ago" and that the economic environment will improve further in the coming months.

However, Ontier Spain managing partner Pedro Rodero has a number of concerns. "Spain has lost almost one year without a government," he says. "A lot of transactions with regulatory aspects have slowed down because politicians are reluctant to take decisions and reach agreements on crucial matters." Ramón Fernández-Aceytuno, partner at Ramón y Cajal, says: "We have seen that many operations are on standby for the time being – the political situation is critical."

The forthcoming elections in Spain may result in changes to the civil procedure laws and labour regulations, says Bernad. "This will affect the ability of landlords to carry out evictions and this will impact on investment in portfolios of residential property, as well as on the ability of the jurisdiction to compete for new investments," he adds. However, Rodero says he anticipates continuing growth in M&A and capital markets work, as well as increased investment in the real estate and industrial sectors. "In addition, criminal advice is a growing area as corporate crime is a day-to-day issue," he adds.

Allen & Overy partner Antonio Vázquez-Guillén says his firm experienced a growth in revenue of around 9 per cent in 2015, partly due to an increase in transactional work. He adds: "There are also opportunities in real estate, insolvency, restructuring, toll roads and renewables." However Vázquez-Guillén says one of the biggest challenges facing law firms is the fact that judges do not always have the ability to understand more sophisticated cases. Gómez-Acebo & Pombo managing partner Carlos Rueda says that Spanish law firms have demonstrated they have the capacity to adapt to a fast-changing market. He continues: "We are doing transactional and restructuring work – while banks becoming digitalised leaves some unanswered questions and law firms that can adapt will be successful." 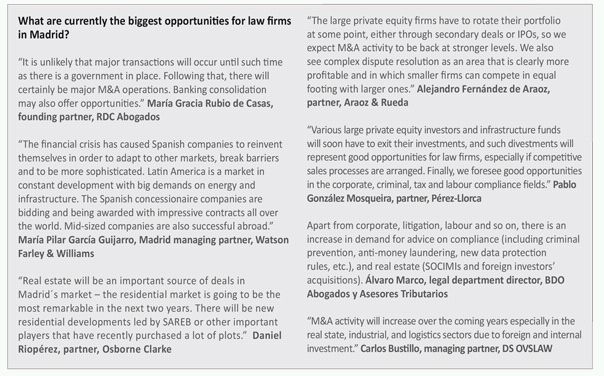 Litigation and tax practices are less affected by economic conditions, says De Carlos. He adds: "Changing labour laws mean our labour practice is active, though there is more volatility in the corporate practice – there is also important restructuring work, real estate is very active and there are capital markets transactions."

De Carlos also highlights Madrid projects in the pipeline including the "Fifth Tower" project, which will accompany the city's existing "Cuatro Torres". Meanwhile, more clients are realising that they need to be compliant, according to Alonso. "The compliance practice is very active," he adds. Rodero says research has indicated that around 90 per cent of Spanish companies have not implemented compliance procedures.

The transformation of Spain in the last eight years has been incredible, says Bernad. "Spain is changing fast, the banking industry is under continuous pressure, most savings banks have disappeared and there have been many 'low noise' structural reforms – such as insolvency law – that should create further investment opportunities in the future," he adds. Fernández-Aceytuno says that litigation has not been affected by the crisis and that, in fact, it has possibly performed better. He adds: "We are seeing the appearance of smaller law firms in the market. Meanwhile, there is an increasing number of claims against banks and there are also opportunities in energy and infrastructure." In addition, Fernández-Aceytuno says there are more start-ups emerging.

Alonso says there is a lot of pressure on law firms' profit margins. "Clients want to pay less for more, but you have to maintain profits-per-partner in order to attract talent – there are also more obstacles for associates who want to make partner," he adds. Alonso also says that clients are less loyal and "beauty contests happen every day".

Berricano says that young lawyers do not have the same long-term career aspirations as previous generations. The 'war for talent' will be one of the biggest challenges law firms face in the coming years, says Guerra. "There will need to be different ways of rewarding lawyers in the short term and different models of work – the key word is flexibility and law firms have to offer this to lawyers," he adds.

De Carlos says the legal market is very competitive. "In the past, strategy was often based on size and growth in headcount, but now it's important to control size and improve productivity and not necessarily by working more hours," he explains. "Technology is key, as is knowledge management and people management – having the best people is essential and you have to give them good working conditions."

For young people today, life is about experiences, according to Vázquez-Guillén. "Young people now are more entrepreneurial, they may want to work in different areas of practice or go on secondments, there is a change in mindset," he says.

Better integration of women in law firms is another significant challenge for law firms, according to Bernad. He adds that while there are a large proportion of women graduating from law schools, law firms have been incapable of elevating the same percentage of women to partnership level. "Flexibility, technology, knowledge management, as well as mobility [the willingness of lawyers to work in different geographical locations] are important," says Bernad.

In addition to managing talent and better utilising technology, data protection is another major challenge for law firms, says Vázquez-Guillén. "We need to step up and be tough on managing confidential information." Rodero says that, increasingly, firms need to prepare themselves to operate in a global environment, while also being successful at a local level. He continues: "Clients demand more for less and the path to delivering this is technology, but this is a challenge for smaller firms."

Managing talent and people, as well as managing remuneration at all levels, within the context of fee pressure, are among the significant issues facing law firms, says Menéndez. "Partners are under pressure, they work a lot of hours and they must be paid well," she adds. "But there is limited scope to reduce costs and there is the challenge of providing associates with career prospects." Berricano says clients' key concerns are availability and efficiency as "excellence is taken for granted".

Guerra says all leading law firms have "smart, experienced lawyers". He adds: "The key question is what's different about your firm; we need to transform law firms' culture and we need the commitment of our people to do that." 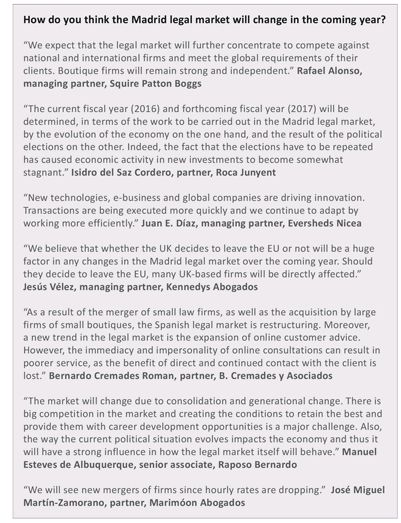 Fernández-Aceytuno says data protection is a major concern for law firms. "We have to be more imaginative in designing products, as well as in attracting and retaining talent – young lawyers are looking for other things, they know the levels of remuneration in all the firms, they want a vibrant working environment, young lawyers increasingly have a more business-related view," he says.

People management, enhancing career prospects for women, technology and knowledge management are major challenges for law firms, says De Carlos. Meanwhile, earlier this year, Uría Menéndez incorporated two Peruvian firms, Ferrero Abogados and Delmar Ugarte. De Carlos says: "We also face challenges in Latin America where we are bringing Peruvian partners on board and we need to ensure that the integration is successful."

Law firms in Madrid have many issues to grapple with in the coming year, with talent management and how best to utilise technology being among the most prominent. However, leading firms in Spain have demonstrated a strong ability to adapt to changing market demands and this experience will stand them in good stead as the market braces itself for a new era, which could potentially be altered by new political forces.