This application underlying this decision relates to the area of computer games. However, the European Patent Office refused to grant a patent that deals with implementing a tournament for players of a computer game. Here are the practical takeaways of the decision T 1488/17 of October 12, 2021 of Technical Board of Appeal 3.4.03:

For being considered technical with respect to patentability, it is not sufficient that a feature belongs to a technical system. Instead, it must contribute to the solution of a technical problem.

According to the Board in charge, the claimed invention relates to a system for conducting online a video game tournament having a plurality of levels. The Board summarized the invention as follows:

1.2 The claimed invention proposes a system conducting a video game tournament in which players can decide themselves when they play their game(s). The system maintains a list of registered players and the level of the tournament which each player is eligible to play at. Players have first to declare themselves ready to play before they are set to play a game. The system maintains a second list of players that have declared themselves ready to play. The system matches players, who are in this second list and at the same level, for a game. After the game ends, the system allows the winner to advance to the next (higher) level, and if they were at the last (highest) level they are awarded a prize.

After each game, players can decide whether or not they declare themselves ready to play the next game. So players can play several games in a row or can interrupt the tournament and resume at a later time, without any consequence to the running of the tournament. In such a way, the system allows players to have more control of their playing schedule, while the tournament runs normally (see paragraph [0010] of the application). 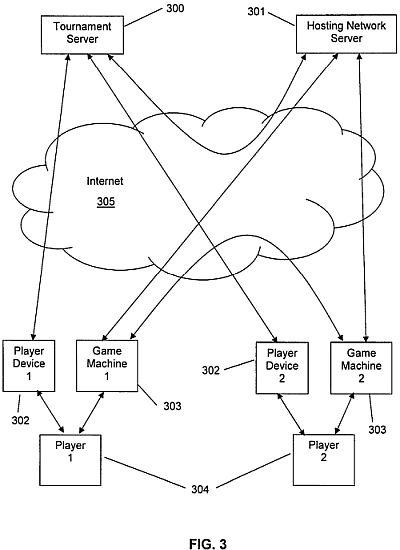 wherein the tournament server is configured to award a grand prize to the winning player when the player wins a match at the last level, and wherein each pair of matched players comprises two players who are selected to compete against each other in a match.

During the appeal proceedings, the Board in charge noted that it is common ground that claim 1 differs from the closest prior art document D2 in the following two aspects:

– it provides a ready list in the tournament server, the ready list being populated in response to signals received from players via their player devices;

According to the appellant's first line of argumentation, the claimed subject-matter would make the course of a tournament more flexible:

2.3 ... The claimed system provided flexibility to the players because they did not need to play any games at predetermined times. Players could play whenever they wished and this did not affect the other players participating at the tournament.

However, in the Board's view, the distinguishing features would only define how the tournament is played and would thus not relate to the solution of a technical problem:

2.5 In the board's view, the distinguishing features define how the tournament is to be run, i.e. they relate to the rules of running the tournament. Such rules are rules for playing games, which are not technical and excluded from patentability as such (Article 52(2)(c) and (3) EPC).

Moreover, the increased flexibility would not be achieved by a technical consideration but only by modifying the rules of the tournament:

2.5.2 Moreover, the increased flexibility is achieved by modifying the rules of the game tournament. It is the change of the rules that provides the possibility to the players to determine freely when they play their matches. As stated previously, the rules of the tournament are not technical, and any modification to them does not address any technical problem or involve any technical considerations, but merely provides a set of new rules for playing a game.

Hence, the distinguishing features would only relate to non-technical game rules:

2.5.3 Hence, the claimed system differs from the one in D2 only in that it runs a tournament with modified game rules. These modified rules are not technical as they relate to the underlying non-technical game rules of the tournament. According to established case law and practice (see e.g. T 641/00, "Two identities/COMVIK", OJ EPO 2003, 352, Headnote 2, and Reasons 5 to 7), these modified rules for running the tournament will be given to the skilled person for implementation.

According to a second line of argumentation, the appellant stated that the distinguishing features belong to a technical system and therefore have to be considered as technical:

2.6 In an alternative line of reasoning, the appellant argued that the claims related to a system, which was incontestably technical, and the distinguishing features were technical features. Even if these features were implementing rules for playing games, this did not change the fact that the features themselves were components of a technical system and were of technical nature. Although they were known technical components when taken in isolation, it was their functions that were important. Each component had an associated function and enabled players to play in a certain way. The technical problem was not related to the implementation of game rules but to how to provide a system for the specific game tournament. This was a technical problem.

However, again, the Board in charge did not agree:

2.7 The board does not find this argument persuasive. As a general remark, the board notes that a distinguishing feature needs to solve a technical problem in a non-obvious way in order to be considered a basis for an inventive step.

2.8 Summarising, the board's conclusion is that the features distinguishing claim 1 from the state of the art constitute an obvious implementation of the non-technical rules for playing the game tournament.

Hence, the distinguishing features cannot be taken into account for the assessment of inventive step. As a result, the appeal was dismissed due to lack of inventive step within the meaning of Article 56 EPC.