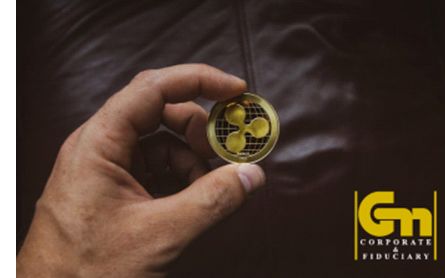 If you keep tabs on the fintech, then you are already well familiar with the hype machine known as blockchain. But, there are still plenty of people who have either never heard of the blockchain or misunderstand the technology and it's potential.

What's the big deal, then?

Even if you're not interested or involved with fintech, the blockchain has the potential to impact your life both personally and professionally. This isn't just hyperbole. The blockchain is going to be the next thing.

And, that's why it's vital that you get caught up to speed on its past, present and future.

What is blockchain and where did it come from?

Blockchain is a simple digital platform for recording and verifying transactions so that other people can't erase them later -- and anyone can see them.

For the techies out there, the blockchain is an anonymous peer-to-peer payment system that relies on secure cryptographic protocols. It uses a public ledger and database to record all record transactions. However, it's decentralized. This means that there is no governing body controlling the blockchain.

If that sounds like bitcoin to you, then you'd be correct. The blockchain was built using the bitcoin system that was released by Satoshi Nakamoto in 2009. Although, the idea of cryptocurrency can be traced back to the work of David Chaum and his invention known as DigiCash back in the 1980s.

What Is All The Fuss About Blockchain?

The blockchain ledger helps to provide transparency for transactions. Although many bitcoin transactions are in some ways anonymous, the blockchain ledger can link individuals and companies to bitcoin purchases and ownership by allowing individual parties, called miners, to process payments and verify transactions. Rather than a central company presiding over the use of bitcoin, these blockchain originators serve central roles in the management and administration of this alternative currency system.

In other words, the blockchain is actually composed of single transactions known as "blocks." Each block links together and forms a complete bank history of transactions. Once a block is linked, it cannot be edited.

Unlike bitcoin, the blockchain is constantly evolving and can extend beyond cryptocurrency. Before we get much further, here are a couple key pointers to remember :

Why are people excited about blockchain?

This is a really good question. And, there isn't just one answer. Almost everyone can agree that the blockchain is one of the most interesting and disruptive forces to come along in quite some time. And, that's because the blockchain is able to:

One of the most talked about advantages involving blockchain technology is how it can prevent future payment scams. For starters, it would protect both buyers and sellers by using "smart contracts." This procedure would avoid those instances where you purchase an item and the seller doesn't follow through.

Another way that scams are thwarted is that since all transactions are recorded, a coin can't be used for double-spending or counterfeited. Once a coin, token or electronic currency is spent, it can't be used again.

There's also the possibility that companies and individuals can no longer "cook the books" or price gouge customers. Again, since every transaction is recorded, every cent is accounted for and would prevent an Enron type situation. Price gouging could be a thing of the past since it would protect intellectual property by being shared publicly on the blockchain.

The most discussed perk is how secure the blockchain is. Besides transactions being placed in the ledger, it is secure because transactions are directly between two parties that require a unique signature to authorize the transaction. Without third parties and the signature, coins and token can't be altered.

2. Cuts out the middleman.

The blockchain is a peer-to-peer system, meaning that transactions are between you and another party. This simple two party only, could be a real game changer. We use this to be able to facilitate cheap ecash transactions across the world. For example, you could send friends or family money anywhere in the world without having to pay for the transaction or currency fees that traditional banking or financial institutions have used.

Imagine being able to send and receive money from across the globe in just a matter of minutes. How about receiving a signed contract or vehicle title in just a day? No matter the scenario, blockchain decentralized and the P2P system allows you to settle any digital wallet transaction quickly, as opposed to waiting days or weeks.

Cloud storage is an incredible development. But, you don't have any control of the storage infrastructure. It's in the hands of Google, Dropbox, Facebook or Apple. And, that could become a concern if you value your privacy. Since you'll need an encryption key to access your data, you can rest assure that no one else can access it except you.

Who doesn't love reward programs? The blockchain can improve loyalty programs by giving customers the ability to trade points among each other since the transactions would be placed in the public ledger. It would also open up the possibility of using points at different vendors. For example, you could use some of your airline points at your favorite coffee shop or eCommerce site.

Because of those capabilities, the blockchain will be able to disrupt the following;

Because of this, blockchain technology actually has the potential to change the world. And, that's why there's so much buzz surrounding it.

Where is the blockchain headed?

Blockchain is just the beginning. In fact, expect the technology to continue to improve and evolve in the immediate future.

If you are interested in setting up  a DLT company, an ICO, a cryptocurrency exchange, we welcome you to get in touch with our lawyers.

ARTICLE TAGS
Malta Technology Fin Tech
POPULAR ARTICLES ON: Technology from Malta
Fintech – Law And Practice
Walkers
Jersey has been a leading international finance centre for more than 50 years. Thanks to a forward-thinking approach, Jersey is at the forefront of wealth management, funds, capital markets
Can Artificial Intelligence Machines Be Patented Or Sued?
STA Law Firm
Hollywood movies introduced the concept of artificial intelligence to the world. Following the portrayal of artificial intelligence, many have speculated that robots will one day take over the world and subdue humans as their subjects.
COVID-19 Cybersecurity Threats – Vulnerabilities And Best Practices To Be Secure
Elias Neocleous & Co LLC
Working from home has become the new norm for almost all organizations, due to the recent COVID-19 pandemic outbreak.
Digital Identity In A Digital World – The FATF Guidance
DQ Advocates
The Financial Action Task Force (FATF) has published (March 2020) a guidance document on Digital Identity. At a time when many organisations are considering how best to comply with...
The Validity Of Electronic Signatures Under Cyprus Law – COVID19
Patrikios Pavlou & Associates
Key points on the legal framework guiding the validity of electronic signatures in Cyprus. The (digital) silver lining of COVID-19.
A UK And European Perspective On The Regulation Of Cryptoassets: Cyprus Chapter
A.G. Erotocritou LLC
A.G. Erotocritou LLC has been invited by Burges Salmon to contribute the Cyprus chapter to a comprehensive paper in relation to the abovementioned topic.
FREE News Alerts
Sign Up for our free News Alerts - All the latest articles on your chosen topics condensed into a free bi-weekly email.
Register For News Alerts
Article Tags
Malta Technology Fin Tech
Related Articles
Cryptoassets: A UK And European Perspective On The Regulation Of Cryptoassets GANADO Advocates
COVID-19: Teleworking And Cybersecurity DF Advocates
Landmark Case In The Making: U.S. Judge Stalls Telegram's Crypto Issuance WH Partners
Malta Financial Services Authority Publishes Consultation Feedback With Respect To The Establishment Of A New Regulatory Framework For FinTechs WH Partners
Future Regulation Of AI In The European Union: What You Need To Know Camilleri Preziosi Advocates
Comparative Guides
Blockchain
Corporate Tax
Labour and Employment
Merger Control
Trademarks
Mondaq Advice Centres
Global
Investment Immigration
Global
Trademarks in SAARC Countries
More MACs
Upcoming Events
Mondaq Social Media