by Christos Floridis
Elias Neocleous & Co LLC
0 Liked this Article
To print this article, all you need is to be registered or login on Mondaq.com.

Geostrategic and financial interests regarding gas exploration and exploitation

Cyprus, the third largest island in the Mediterranean Sea, is located at the crossroads of major international energy routes between the Gulf countries and the West. Its status as a Member State of the European Union offers security guarantees, and its economy is well known as an open services-oriented market. The geographical position of Cyprus and its worldwide financial activities have made it a strategic hub for business activities in the region and the recent discovery of gas deposits offshore Cyprus gives it potential to develop as a centre for oil and gas trading.

Cyprus is a promising frontier for exploration, with proven potential in the vicinity. It is adjacent to five main offshore recognised hydrocarbon structures, namely the Eratosthenes Continental Block, the Levantine Basin, the Herodotus Basin, the Nile deep sea fan, the Eratosthenes Basin and the high anticlinorium and the top Eastern Cyprus Arc. The offshore deep water frontier exploration area extends to about 51,000km² being part of the exclusive economic zone located to the south of the island. The studies to be carried out in Cyprus's EEZ concern 13 exploration blocks. The large potential of Cyprus as new emerging hydrocarbon region, is mainly based on geostrategic factors that offer the ability of offshore investments in the area.

Experience in nearby Israel regarding the exploitation of natural gas resources in the Eastern Mediterranean rim demonstrates that the demand for natural gas is increasing and that a shortage is expected in 2012-2013 due to disruptions in Egyptian gas supply. Gas supply will be accelerated in 2014 with the commissioning of the Tamar field, discovered in 2000, 15km off the coast near Ashkelon. This is projected to produces considerable gas quantities, with deposits estimated at 1.2 trillion cubic feet (33.5 billion cubic metres).

The natural export options have so far focussed on the installation of a plant using gas produced in the EEZs of Israel and Cyprus to produce fertilizers, methanol and petrochemicals. The initial estimates of a pipeline between the Leviathan gas field and Vasilikos in Cyprus indicate a length of 200 km, with a maximum depth in excess of 2 km. The construction and the development cost of the relevant pipeline are estimated at $3.5 billion, with the plant itself estimated at between $8 billion and $12 billion.

The EU characterises Cyprus Republic as an emergent market for natural gas and also as an isolated market. Unlike the electricity sector, which has already been liberalised, the gas sector will remain a government monopoly for at least 20 years. The state-controlled Natural Gas Public Company (DEFA) has been designated by the government as the sole importer and distributor of any form of natural gas in Cyprus.

Current licensing rounds in the area concern 3 countries. The first is Egypt, where the creation of a new joint venture between Dana Petroleum and the Egyptian General Petroleum Corporation aims at the production of oil and gas through a lease in the Gulf of Suez after approval by the Egyptian Ministry of Petroleum. Egypt is offering 15 blocks covering more than 18,000 km² with a bid submission date of 31 January 2012. In Algeria Alnaft, the national agency for the development of hydrocarbon resources, is seeking to conclude contracts for exploration and exploitation in two blocks including the Rhourde Rouni Block. In Iraq, twelve blocks covering 87,200 km² are on offer in the fourth licensing round with bidding in January 2012.

Looking back over recent years, the economic crisis depressed the global demand for gas 2009/2010, particularly in the OECD and in Eastern Europe/Eurasia. The over-supply in the market was exacerbated by the investment in unconventional gas production in the USA, reducing reliance on gas imports. 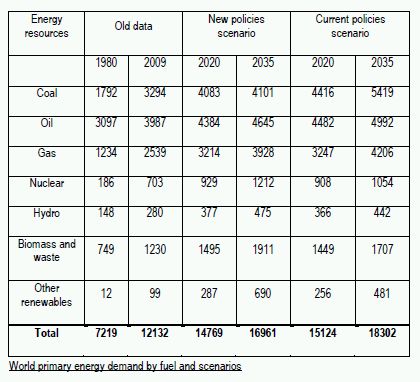 Most long-term supply contracts into Europe and Asia include commitments as regards minimum volume and most buyers under such contracts have reduced their purchases to the maximum extent allowed under the contracts would allow it. Refusal by the pipeline suppliers to Europe, particularly Russia and Algeria, to lower their prices caused their exports to fall significantly in 2009. According to certain gas trade scenarios, an erosion of excess capacity will be observed over the next few years, with the average capacity utilisation rate moving from less than 75% in 2009 to around 80% by 2015. In this scenario, global demand is driven strongly by Asia, whereas the gas demand growth in Europe is expected to recover more slowly. Because of new transport capacity that has become available, pipeline capacity utilisation is unlikely to return to pre-crisis levels for some years, if at all.

Looking more closely at the gas and LNG markets in Europe and the eastern Mediterranean region, natural gas has increased its share in the energy mix over the last 40 years and according to the latest International Energy Agency (IEA) analysis the outlook for gas over the next 30 years is positive, with the prospect of an even greater share in the overall energy mix.

According to IEA estimates, gas demand in Europe is likely to reach nearly 670 billion cubic metres by 2035. The decreasing cost of LNG makes it more competitive in more markets, especially where there is political instability, making it a more attractive option than international pipelines crossing many countries.

Global demand for natural gas may be twice current levels by 2030, with LNG growing perhaps fivefold, driven by continued cost reduction. The IEA's analysis shows that the total capital costs for new LNG projects will increase by about 40% from the mid 1990s to 2010 with the greatest cost reduction being seen in projects to expand existing facilities and to build larger trains. In addition, the LNG shipping fleet will need to increase in order to meet increased demand.

LNG allows access to otherwise inaccessible suppliers and can hence improve gas supply security. With the exception of Greece and Turkey, South-East Europe (SEE) lacks LNG import facilities and cannot benefit from availability of cargoes at what may be attractive prices.

Cyprus's long term energy strategy is aligned with EU directives and is based on three main objectives: security of supply, economic efficiency and environmental strategy. The policy regarding security of supply reflects the EU's aim of diversification of energy sources and parallel maintenance of national security stocks. The economic efficiency objective targets a reduction in the cost of energy and the cost of production. On the other hand, environmental strategy targets the EU's objectives regarding use of renewable energy sources, the reduction of CO2 emissions and the increased efficiency in power generation.

The European Commission is pressing for further liberalisation of European energy markets in order to promote lower energy prices through choice of suppliers, to guarantee a fair opportunity of investment between companies of different sizes by giving them equal access to the market, to encourage investment in power plants and to allow the emissions trading scheme to work properly.

The harmonisation of Cyprus Law with EU Directives 2009/72 and 2009/73-3 is aiming at this end. The regulation is seeking to harmonise and strengthen the powers and duties of the national regulators in order for them to be able to issue binding decisions on companies and impose penalties, where is considered appropriate. Further, EU regulation is seeking to ensure the independence of the national regulators of industry interests and government intervention by having their own budgets and strict rules for management appointments. A platform of mutual cooperation should also be developed and implemented in order to facilitate cooperation among the totality of EU national regulators.

The legal and regulatory framework in Cyprus governing hydrocarbons, their prospection exploration and exploitation and oil and gas drilling activities, including their implications for business and the environment, comprises national laws, EU regulations and multilateral and bilateral international agreements.

As a minimum, the production sharing contracts issued by the government include obligations to carry out at least a specified amount of exploration work, the definition of the work programs and of the budgets to be attributed and the specification of the project appraisal and development plans. The contracts will also include clauses dealing with profit sharing of the oil and gas production, annual surface fees as well, bonuses and training obligations included in the project.

Cyprus has carried out a Strategic Environmental Assessment (SEA) to identify, describe and evaluate the likely significant effects on the environmental effects of implementing hydrocarbon exploration and exploitation activities and applicants are required to follow and comply with the results and recommendations of the SEA.

Bilateral agreements regarding the maritime boundaries of the exclusive economic zone have been concluded with Egypt, Lebanon and Israel, in 2003, 2007 and 2010 respectively. In addition, a framework agreement with Egypt concerning the development of cross-median line hydrocarbon resources was signed in 2006, together with a confidentiality agreement.

Cyprus's newly-discovered natural gas resources will make a substantial contribution to Europe's energy security and will promote the development of the South-Eastern Mediterranean region. As a result of this development further bilateral relationships and synergies may be developed with international investors and other interested countries.