In the run-up to Ghana's 7 December 2016 elections, Songhai Advisory conducted a survey from among Ghanaian voters to gauge popular sentiment in what many are predicting will be a closely contested race between the party in government, the National Democratic Congress (NDC), and the major opposition party, the New Patriotic Party (NPP) and their flag-bearers.

Understanding the electorate and the issues that motivate voters is crucial for any aspiring candidate or party seeking power. For the majority of respondents (58%), the policy objectives put forward by candidates is of chief importance when deciding who to vote for. This could explain the similarly high proportion of respondents who said they had read party manifestos: 61% (see Appendix). Experience was the second-most important consideration among pollsters, with charisma and family voting patterns left trailing behind. None of the respondents felt that where the candidate comes from is an important factor when choosing who to vote for, which is extremely interesting to note, given that the vote in Ghana has typically been along ethnic lines. 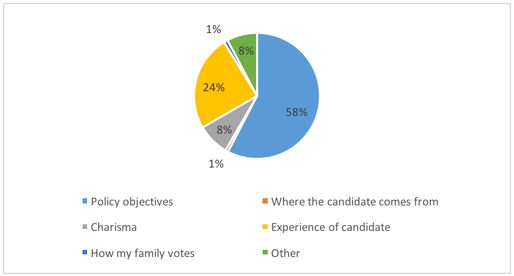 Figure 2. What is important to you when choosing who to vote for?

According to a recent World Bank report, in Ghana, the problem of the job market is not so much that there is unemployment as it is about the scarcity of well-paid jobs1. The report highlights that it tends to be public sector jobs which are better paid than private sector work and that social security is 'consistently' provided to public sector workers, which is not the case with the private sector. Perhaps such considerations were at the forefront of respondents' minds when placing 'job creation' at the top of their wish list for the incoming government to address.

Eradicating corruption came next, with 19%. There has been a slew of corruption-related scandals of late, with the Attorney-General & Minister of Justice, Henrietta Brew Appiah-Oppong stating in March this year that the Economic and Organised Crime Office (EOCO) had investigated 186 cases in 2015 alone. Think tank, Imani Ghana, published a report in June, alleging that between 2012 and 2014, GHC5.9bn (US$1.5bn) is unaccounted for due to financial 'recklessness' across various state institutions, including ministries, departments and agencies2. Both healthcare and education were viewed as the joint third most important consideration for the new government, followed by supporting SMEs, infrastructure, water & sanitation.

Seemingly, respondents felt the NPP would be the most competent in meeting those needs (69%). While the vast majority of respondents displayed a reluctance to depart with social convention by saying that Ghana is not ready for a female president (85%), the sentiment of the remaining 15%, a significant minority, shows that this option is not completely implausible.

Confidence in the conduct of the elections was mixed, with almost half of the respondents considering that the elections will be 'fairly' free and fair. Only 4% were extremely confident in the process, while 18% had a bleak outlook, stating that the polls would not be free and fair at all. Just under one quarter of eligible voters thought that the Electoral Commission (EC) is not at all competent while a similar number of voters were 'very' confident of the institution's abilities.

For every person who thought that the judiciary is competent, there was one who said that it was not (48% each). But only 4% of respondents expressed no confidence at all in this arm of the state. Arguably, the election petition case in the aftermath of the 2012 elections –which lasted for close to eight months- may have helped on the one hand to inspire confidence in the court process. However, the subsequent emergence of what has been described as 'the biggest corruption scandal to have hit Ghana's judiciary3', led by award-winning undercover journalist Anas Aremeyaw Anas which uncovered the extent to which the various layers within the judicial service have been compromised through bribery, has no doubt undermined confidence in the judiciary's ability to maintain independence. This is indeed worrying because if there are challenges to the legitimacy of the results, doubts are cast over whether people would repose their trust in the courts or if they would seek justice through alternative means.

However, the institutions which did inspire confidence the most among respondents were the religious ones, which could be the result of the characteristics of the respondents (see above). Indeed, respect for government pales in comparison with the respect accorded to religious bodies according to these results: 20% and 54%, respectively. Out of the religious bodies that people respect the most are the church (26%), the mosque (15%) and religious other (13%). The chieftaincy holds sway with one in six of those that we polled.

In our conversations with a number of different people in the run-up to the elections, a common phrase we encountered when enquiring about the security of the polls was that 'Ghanaians are peaceful' so there was nothing to be concerned about from a security standpoint. However, the Electoral Commission (EC) has highlighted 81 constituencies out of 275 which could be flashpoints for insecurity. Indeed, the vast majority of eligible voters expressed concern about security in the run-up to the polls (79%).

While the results of this survey are indicative only, they paint an interesting picture of how a cross-section of Ghanaian voters feel presently about the imminent parliamentary and presidential elections.

These findings do appear to confirm the prevailing sentiment that the elections will be a two-horse race between the incumbent NDC and the opposition NPP. Perhaps in the future, a reform to the 'winner takes all' electoral system, in favour of proportional representation, may inspire greater confidence among voters that smaller parties could be a credible choice, but at present, that is not the case. The survey results show us that most of the respondents are not ready for a female president. However, with 15% saying that the nation is ready, this is a significant enough minority for us to pay attention to, particularly as popular discourse over the need for gender balance increases. Bread and butter issues are at the top of the list for Ghanaians, at a time when the economy has faced several setbacks with frequent dumsor, significant currency depreciation, rising living costs and ballooning public debt over the past four years.

Confidence in the electoral process is not high and there are concerns about security. It is critical therefore that greater efforts are made to ensure that the polls are efficiently coordinated on polling day to stave off the risk of the outcome being de-legitimised. Should the electorate feel cheated out of a free and fair poll, there is concern that the courts may not provide the same level of comfort that they provided in the aftermath of the 2012 elections. Respondents were equally divided over the competence of the judiciary, which could be a reflection of a wider sense of disenchantment with the court process against the backdrop of the 2015 judicial scandal. Thus, given the level of influence that religious bodies have in the country, these institutions may be required to step into the vacuum created by a lack of confidence in the traditional arms of government, particularly after the vote. 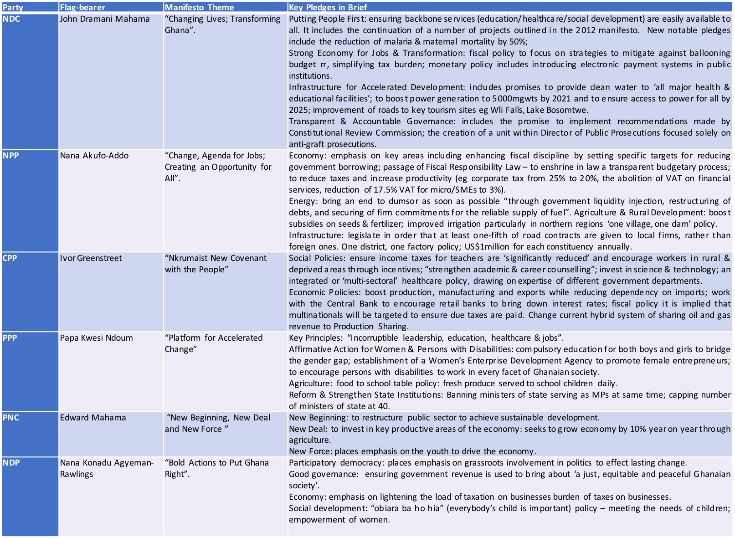 ARTICLE TAGS
Ghana Government, Public Sector Constitutional & Administrative Law
POPULAR ARTICLES ON: Government, Public Sector from Ghana
Money Laundering (Prevention And Prohibition) Act 2022: Enhanced Anti-Money Laundering Regime In Nigeria
Olaniwun Ajayi
As part of the intensified efforts towards implementation of the Financial Action Task Force (FATF) recommendations on anti- money laundering and combating the financing of terrorism...
Challenges In Enforcement Of Fundamental Rights In Nigeria
PUNUKA Attorneys & Solicitors
The foundation of democracy in any country is seen in the observance of the rule of law.
Key Provisions In The Money Laundering (Prevention And Prohibition) Act, 2022
Pavestones Legal
In recent times, startups and financial servicing companies around the world have been sanctioned for breach of money laundering regulations.
A Summary Of The Legislative Process In Nigeria: A Guide To Lawmaking In The National Assembly
Streamsowers & Kohn
Most modern government is made up of three arms working together - namely the Executive, the Judiciary, and the Legislature.
The Electoral Act 2022: Key Changes And Impact On The 2023 Elections
S.P.A. Ajibade & Co.
On 25th February 2022, President Muhammadu Buhari signed the 2022 Electoral Act Amendment Bill into law, after months of withholding assent.
The Exclusive Legislative List And The Concurrent Legislative List - A Case For Restructuring Or Constitutional Defect?
Brickmans Law
Federalism in simple terms is the division of law-making powers and functions between two levels of government, so that general and regional governments are each within a sphere co-ordinate and independent.
FREE News Alerts
Sign Up for our free News Alerts - All the latest articles on your chosen topics condensed into a free bi-weekly email.
Register For News Alerts
Article Tags
Ghana Government, Public Sector Constitutional & Administrative Law
Similar Articles
Powered by mondaq AI
MATCH
44%
Ghana Decides: D-Day For Presidential & Parliamentary Vote: A View From The Ground Songhai Advisory LLP
43%
Ghana Decided: Out With The Old, In With The New Patriotic Party Songhai Advisory LLP
Related Articles
Opportunities In Ghana For Nigerian Businesses Firmus Advisory
2022 Budget Highlights - Budget Statement And Economic Policy Of The Government Of Ghana For The 2022 Fiscal Year KPMG
Transmission Infra In Ghana - Africa's Infrastructure Paradox Koranteng & Koranteng Legal Advisors
How To Obtain Free Zones Licence In Ghana; The Legal Regime Legalstone Solicitors
How To Set Up A License Gold Export Company In Ghana Legalstone Solicitors
Mondaq Webinars
Employer Responsibilities and Employee Rights in Australia
People + Culture Strategies
Future Series: Managing the Risks of ESG Reporting and Compliance for In-House Counsel and Executives
Bennett Jones LLP
More Webinars
Comparative Guides
International Arbitration
Mining
Oil & Gas
Secured Lending
More Guides
Mondaq Advice Centres
Global
Trademarks in SAARC Countries
More MACs