As managers of Cayman Funds are coming to grips with the reporting requirements of AIFMD1, a second wave of European legislation, namely EMIR2, approaches the Cayman Islands. EMIR will have to be navigated by Cayman Funds trading derivatives both with European Union counterparties, and in certain circumstances, even when trading with non-European Union counterparties.

Although the provisions of EMIR principally impact European entities which are financial counterparties3 ("FC's") and non-financial counterparties4 ("NFC's") as defined in EMIR, managers of Cayman funds will need to be aware of EMIR and how it might impact their funds when trading with European counterparties. In addition, provisions of EMIR relating to Extraterritoriality and Equivalence will impact third country entities, including Cayman Funds, in certain circumstances, even when they are trading with non-European entities.

EMIR is European legislation which aims to fulfil European Regulators' G20 commitments that all standardised OTC derivatives should be cleared through central counterparties ("CCPs") and that OTC derivative contracts should be reported to trade repositories ("TRs"). EMIR is also intended to address related commitments to a common approach to margin rules for un-cleared derivatives transactions.

EMIR entered into force on 16 August 2012 bringing about a new era for OTC derivatives markets and introducing the following obligations:

In the case of a Cayman Fund, it will be indirectly affected because it is not possible to clear only half a transaction. If the OTC trade is not cleared through a central counterparty ("CCP"), the Cayman fund will be required to comply with the risk mitigation measures of EMIR. This is because an FC or an NFC which transacts with a Cayman Fund will, in order to facilitate their own compliance with EMIR, be obliged to ensure that those Cayman Funds, being TCE's, comply with the risk mitigation measures of EMIR.

The risk mitigation requirements with which the TCE must comply are the requirements for (i) portfolio reconciliation; (ii) dispute resolution; (iii) timely confirmation and (iv) portfolio compression.

In light of this requirement, the European Securities and Markets Authority ("ESMA") is obliged pursuant to EMIR to draft formal Regulatory Technical Standards ("RTS") specifying both the contracts that are considered to have a direct, substantial and foreseeable effect within the EU and the cases where it is necessary or appropriate to prevent the evasion of any provision of EMIR. Although these RTS are not yet finalised, on 17 July, 2013 ESMA published a consultation paper containing draft RTS (the "Consultation Paper"). The Consultation Paper proposed that EMIR's clearing and risk mitigation requirements apply to transactions between TCEs when rules in both jurisdictions are not considered to be equivalent to EMIR and either:

b) both TCEs execute the transaction via their EU branches.

A summary of the scope of the application of EMIR to TCEs under the draft RTS included in the Consultation Paper and Article 13 of EMIR is as follows: 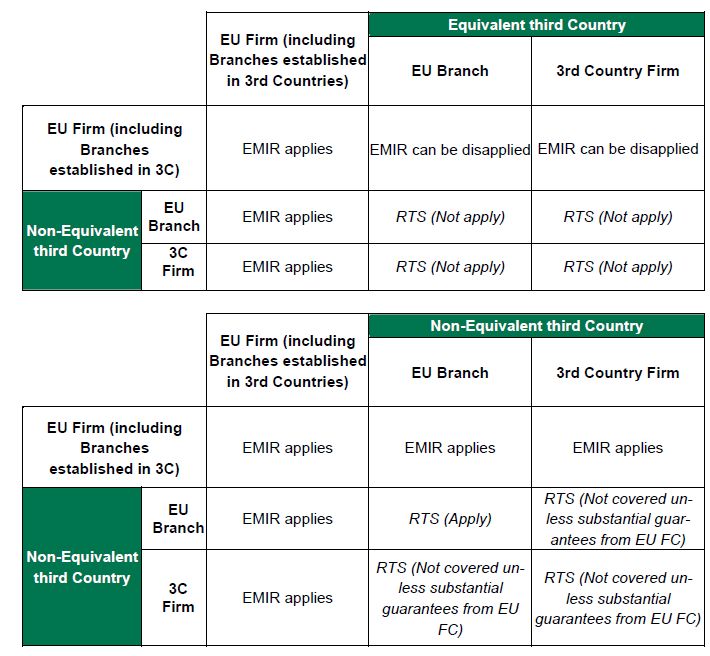 Under EMIR, the European Commission may adopt implementing acts declaring that the legal, supervisory and enforcement arrangements of a non-EU country are equivalent to the requirements laid down in EMIR relating to the clearing, reporting, non-financial counterparties and risk mitigation obligations under EMIR.

In this regard, EMIR clarifies that any implementing act on equivalence shall imply that counterparties entering into a transaction subject to EMIR shall be deemed to have fulfilled the above detailed obligations where at least one of the counterparties is established in that third country.

How Dillon Eustace Can Help

Leveraging off its European team, Dillon Eustace Cayman offers a unique perspective for its Cayman clients on EMIR.

Dillon Eustace will keep its clients and contacts up to date on EMIR developments and how they will affect Cayman funds as the consultation process is finalised. Please don't hesitate to contact Derbhil O'Riordan or Matt Mulry with any queries you might have on this or other legislative developments, Cayman, European or otherwise, where you have any concerns on the impact on your Cayman funds5.

1 Impacting Cayman Funds being marketed in the EU. See http://www.dilloneustace.ie/download/1/AIFMD%20Implications%20for%20Managers%20of%20Cayman%20Funds%20HFM%20Weekd%20Article.pdf .

2 EU Regulation No 648/2012 of the European Parliament and of the Council of 4 July 2012 on OTC derivatives, central counterparties and trade repositories

3 The term FC is broadly defined in EMIR as a person authorised under one of the EU's financial services directives, thereby excluding Cayman Funds.

4 The term NFC is defined in EMIR as "an undertaking established in the Union", again excluding Cayman Funds.

5 Further publications on EMIR can be found at: http://www.dilloneustace.ie/download/1/EMIR%20-%20Key%20Points%20and%20Dates..pdf