by Monique Bhullar , Killian McSharry and Richard Williams
Walkers
Your LinkedIn Connections
with the authors

Finance parties in a transaction frequently use structured vehicles using a borrower orphan as an instrument to secure their position. This is due to the nature of an orphan trust and the independence of its directors which provides an extra degree of comfort when making decisions on enforcing their transaction security. In this article, we discuss the dynamic of orphan structures and how new developments in the industry, in particular the development of the Global Aircraft Trading System ("GATS"), may further enhance the security offered by orphan structures

It is industry practice for each new aircraft finance transaction to incorporate a new company (or special purpose company, or SPC) to hold title to a financed aircraft. There are variations on this theme including multiple aircraft being held in one SPC, or multiple SPCs holding one or more aircraft each, but each SPC solely holding only aircraft and related assets, such as the downstream leases, which are financed and secured in connection with the specific transaction. The use of an SPC provides credit enhancement in a number of ways, but in particular, as the SPC can only incur obligations and liabilities to the finance parties, the risk of third-party creditors unconnected to the finance transaction petitioning the SPC for insolvency and having any recourse to the assets of the SPC are remote.

The directors of an orphan are independent professional directors who are often employees of a professional services company and are often appointed by the share trustee. On occasion, some structures have different requirements, such as Asset-Backed Securitisations (ABS) where the directors will be a combination of independent directors and directors appointed by the servicer or E noteholders. This is a key difference between orphans and SPCs, where the directors may be employees of the parent leasing company, or professional services employees appointed under a service agreement entered into with the parent company. Orphan directors are subject to the same fiduciary duties as directors of any other company. In respect of an orphan incorporated in: 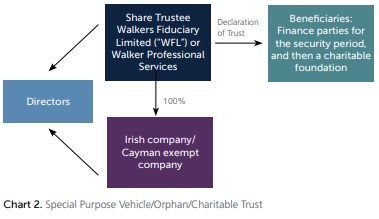 GATS further enhances the standard security package in an aircraft finance transaction. As well as the asset security (the security assignment and mortgage) and the share security, the interposing of a GATS trust means that finance parties are provided with security over the SPC's or orphan's beneficial interest in the GATS trust property (typically the aircraft) and its rights under the GATS trust instrument with the GATS trustee, as trustee. In a GATS transaction using an orphan, there are two trust arrangements, the first between the GATS trustee and the orphan, as well as the trust declared by the share trustee for charitable purposes over the orphan's shares. GATS has been developed primarily to maximise efficiencies in the trading and financing of aircraft. With the notable exception of aircraft ABS, orphans are most commonly used in finance lease transactions, whereby the sale of the aircraft occurs at the end of the finance lease term or on early voluntary termination when title to the aircraft is transferred to the lessee, and there is unlikely to any be trading during the tenor of the finance lease. The use of a GATS trust in a finance lease transaction, however, brings notable benefits to financiers. First, it provides an extra layer of security and therefore an additional enforcement option. Second, the GATS electronic platform imposes a technological block on any trading of the beneficial interest in the GATS trust until the security over the GATS trust has been released as further protection for financiers, Third, enforcement over the security in a GATS trust is arguably more efficient and straightforward than enforcement over share security or over security in a non-GATS trust as security can be enforced electronically through the GATS platform (to the extent such action is not prohibited by applicable laws, such as bankruptcy moratoria). Last, the risk of the GATS trust being infected with liabilities is lower than an SPC, because a trust is a collection of assets and (in most common-law jurisdictions) is not treated as a separate legal entity. As the use of GATS trusts becomes more commonplace, it is conceivable that in financings to operating lessors using finance lease structures (including those also using orphan trust structures), an additional GATS trust may be deployed as the lessee under the finance lease, such that title can drop into the lessee GATS trust (also acting as lessor under the operating lease with the airline) at the end of the tenor of the financing in order to facilitate onward trading of the aircraft.