It has been another twelve months in which the extraordinary has become the norm, the unthinkable the mundane. Lockdowns have oscillated between full, partial and non-existent. Offices, restaurants and borders across the globe have creaked open and slammed shut as the pandemic has continued to shape the way we live our lives. And yet, throughout it all, lock-up funds have continued to be raised: investors were wooed over Zoom, side letters were negotiated at kitchen tables and the universe of participants and stakeholders in the closed-ended funds industry repeatedly showed themselves to be nimble and flexible enough to keep the wheels turning.

As the dust starts to settle on this moment in history, the question becomes this: has there been a fundamental shift in the manner in which closed-ended funds are raised and operated? Are we seeing a paradigm shift allowing and encouraging new working practices, which foster greater diversity in the industry and thereby allow it to continue to attract and retain the best and the brightest, working practices? While only time will tell, one prediction can be safely made: we have at least another year or two of the unprecedented to come.

This has been the first full year since the enactment of the Private Funds Act (the "PFA") in the Cayman Islands, which has seen Cayman closed-ended funds subject to a registration regime for the first time. Newly launched private funds are required to provide certain registration information to the Cayman Islands Monetary Authority ("CIMA") and are also required to comply with ongoing obligations with respect to operational matters, such as audit, safekeeping of assets, valuations and cash monitoring, which obligations largely codify existing best practices familiar to most managers domiciling their funds in the Cayman Islands.

In general, the experience with respect to the registration process has been positive, with Cayman funds continuing to be able to be raised and launched in a timely fashion and the PFA registration process simply folding into the list of requirements in the run up to first closing. Investor sentiment in respect of the new regulatory landscape has also been encouraging, with LPs garnering comfort from the new regime and the additional oversight it provides. In the subscription line financing space, which continues to be extremely active, Cayman borrower and lender side counsel have largely worked through the requirements of the PFA as they pertain to credit facilities. As such, market practice in respect of coverage is now firmly established with respect to such subscription lines, thereby reducing and essentially eliminating any PFA related delays.

In light of the new regime, it has been reassuring to see that fund formation activity in the Cayman Islands has remained extremely robust. Managers with existing Cayman funds have raised successor vehicles, as well as various alternative investment vehicles, parallel and co-investment funds to their existing funds. In addition, we have seen a number of sponsors raising their first ever Cayman funds, with the Asian market being particularly active.

While a number of billion dollar-plus funds have continued to be successfully raised, our survey also shows extremely strong activity in the sub $500 million fund space, including a number of first time managers. 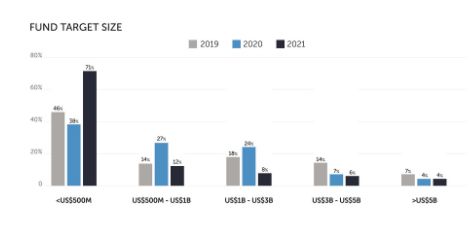 This is indicative of the fact that, notwithstanding the new, globally driven regulatory requirements which apply to funds across jurisdictions, the financial services industry in the Cayman Islands, working closely with CIMA, has reacted to the rigorous new standards to create cost effective solutions for anti-money laundering, automatic exchange of information, economic substance and other applicable regulatory requirements. This, in turn, has allowed Cayman to remain the offshore financial centre of choice for both established global fund managers launching multi-billion dollar funds, as well as start-up managers raising funds for the first time.

The Rise of SPACs

If the special purpose acquisition company ("SPAC") boom began last year, this twelve months has seen it continue and accelerate during the first quarter, before activity fell dramatically at the start of the second quarter. SPACs are blank check companies with no commercial operations which go public with the intention of acquiring a target within a set time period (usually 18 or 24 months).

Cayman has seen a significant share of SPACs, appearing as domicile of choice for around one third of all SPACs globally. The past two years have, in particular, seen a number of fund managers of varying sizes successfully launch SPACs as an alternative way to raise capital, with a growing percentage of such launches being structured as Cayman Islands exempted companies.

After market activity came to a sudden halt in April 2021, there has been a steady resurgence since then as sponsors adjust to increased SEC scrutiny and evolving market terms. While we expect to see further SPACs being raised over the next twelve months by established fund managers, as they have proven themselves to be an efficient mechanism to access and raise capital. We would also however expect to see some pressure on SPAC terms, such as the amount of time available to locate and close a deal, sponsor incentives or size of offering. At the other end of the SPAC lifecycle the competition for business combinations is intense and will only increase as the number of SPACs that were launched at the end of 2020 and the start of 2021 move towards the end of their terms. 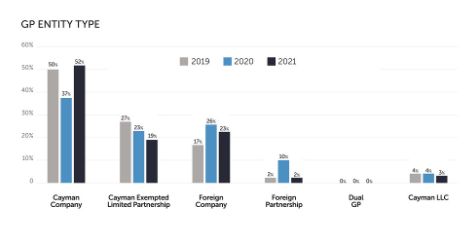 The requirement for significant sponsor commitment remains a key LP concern, although first time managers are often given some leeway. The nature of the skin in the game varies widely, being either on a percentage or absolute number basis, or indeed a hybrid model where the higher of either requirement is taken. The numbers vary widely, with dollar amounts dependent entirely on fund size and percentage commitments typically around 2% of total capital raised, occasionally trending up to 3%, and even in a few instances as high as 5%.

At the outset we contemplated the 'new normals', yet in many ways our data suggests a return to some of the older norms for the funds industry: a broad range of fund strategies, familiar fee pressures and funds carefully considering whether independent governance is right for them. The fundamental task remains to deliver risk-adjusted returns as contemplated in the fund's offering document.

Yet very few managers would say their business runs in the same way it did two or three years ago. They report an increasingly involved investor base with opinions on matters of governance, diversity, ESG factors and the like. For some managers, explaining how returns are delivered is as important as the delivery itself. Add in the continued challenges of attracting and retaining top-tier talent, succession planning as veterans of the Global Financial Crisis contemplate retirement, and the ever-increasing regulatory and compliance burden, the challenges for managers don't get any easier.

However, for all of the disruption and challenges that the last few years have brought, these are also times of immense and fascinating opportunity, as those shifts that are transitory, and those that are more lasting, reveal themselves. Rising to meet these challenges and take advantage of these opportunities is a task for the whole industry, across all time zones and cultures. The fund terms described in this White Paper represent not only the balance of hundreds of individual negotiations, but the beginning of these shifts into the next stage of the industry.