by Joan E. Jung
Minden Gross LLP
Your LinkedIn Connections
with the authors

The notable provisions in the Act for which CCPC status is needed are listed below. It goes without saying that provisions listed below have additional prerequisites. As this paper is intended to address CCPC issues, the below summary is merely perfunctory rather than a detailed analysis.2 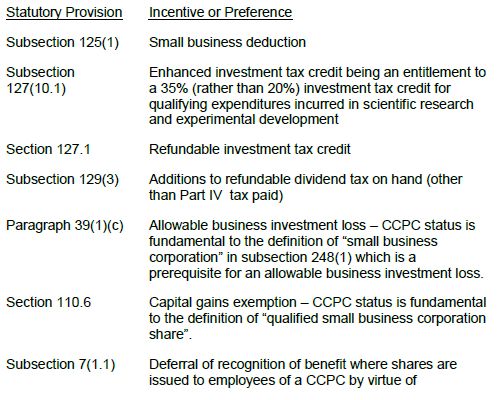 In addition, where a corporation ceases to be a CCPC or vice versa, the change in status will trigger a deemed year end pursuant to subsection 249(3.1).4

A discussion of creating, maintaining or retaining CCPC status necessarily requires analysis of the statutory definition in subsection 125(7) which is reproduced below.

The definition of CCPC was largely unchanged from its first enactment following 1972 Tax Reform (other than the exception for prescribed venture capital corporations5) until the legislative response to widely held shareholder situations like that in Silicon Graphics Limited v. The Queen.6 As originally enacted, the CCPC definition was essentially today's preamble and Paragraph (a) (without the references therein to prescribed venture capital corporations or Paragraph (c)).

Paragraph (c) is self-explanatory and will not be discussed in any detail in this paper.

With respect to Paragraph (d), it should be noted that an election made under subsection 89(11) affects the CCPC definition only for the limited purposes set out in the paragraph. The election does not result in the corporation not being a CCPC for all purposes of the Act.

Paragraph (b) is sometimes referred to as the hypothetical shareholder rule. Prior to the addition of this rule, a corporation "controlled, directly or indirectly in any manner whatever, by one or more non-resident persons, by one or more public corporations ... or by any combination thereof" was not a CCPC. There was no use of the word "group".

In Silicon Graphics, the predecessor corporation of the taxpayer had made an initial public offering of common shares on NASDAQ in 1990. Following the IPO to the end of the corporation's 1993 taxation year, more than 50 percent of the common shares were held by non-residents. The evidence indicated that the corporation was relatively widely held. During the taxation years in question, no single shareholder held more than 13% of the common shares and there were over 300 shareholders of which 200 were non-residents. The majority of the board of directors and the entire management team were residents of Canada. The corporation's principal place of business was in Canada.

The Federal Court of Appeal reversed the Tax Court. The Federal Court of Appeal held that there was no difference between the meaning of the phrases "controlled by a person or group of persons" and "controlled by one or more ...persons" (the latter being the wording in the CCPC definition as it was then). Therefore, the omission of the word "group" in the CCPC definition (as it was then) was irrelevant. The Court recognized that most cases relating to control involved a single or a few shareholders with a controlling interest, unlike the widely held shareholder situation in the case at hand. The Court further recognized a difference in legislative use of the words "controlled" versus "owned" and noted that the CCPC definition (as it was then) used "no word connoting mere ownership". Rather, the definition used the word "controlled" and the Court held that "controlled by one or more .... persons" required a "sufficient common link or interest" among a number of shareholders allegedly comprising the group of persons exerting control over a corporation. A simple mathematical majority ownership of shares by an aggregation of non-resident shareholders without a common connection was held not to constitute de jure control. AS a result, the particular corporation in Silicon Graphics remained a CCPC.

Paragraph (b) was enacted in 1998 applicable to years after 1995 well before the 2001 Tax Court of Canada decision and the 2002 Federal Court of Appeal decision in Silicon Graphics. In fact, the Federal Court of Appeal noted the amendment and drew an inference that the statutory amendment was intended to change the law. It is quite clear that if Paragraph (b) had been in effect in the taxation years in issue in Silicon Graphics, the particular corporation would not be a CCPC.8 Although it does not seem to have been the subject of comment, Paragraph (c) would also have resulted in the particular corporation not being a CCPC. Paragraphs (b) and (c) were enacted in the same amending statute. In Silicon Graphics, the particular corporation was listed on NASDAQ. It would not have been a public corporation because the public corporation definition in subsection 89(1) referred to a corporation with a class of shares listed on a prescribed stock exchange in Canada. Prior to the enactment of Paragraph (c),9 listing on a foreign stock exchange did not affect CCPC status.

1 R.S.C. 1985, c.1 (5th Supp.) as amended, hereinafter referred to as the Act. Unless otherwise stated, statutory references in this paper are to the Act.

4 This paper will not discuss the anomalies which initially arose from the interaction of the deemed year end rule in subsection 249(3.1), the election in subsection 256(9) and La Survivance v. The Queen 2006 FCA 129. For details, see e.g., David Louis, "Parallel Universe: La Survivance and the Capital Gains Exemption", Tax Topics no. 1881, (Toronto: Wolters Kluwer, March 27, 2008). Subsection 256(9) was amended by S.C. 2009, c.2. s.78(2) applicable in respect of an acquisition of control of a corporation that occurs after 2005 such that subsection 256(9) does not apply for purposes of determining if a corporation is a CCPC. See Joan E. Jung, "The 'Sign and Close' – Deemed Year End Rules", Ontario Bar Association Taxation Section Newsletter, vol. 23, no. 1, October 2012.

8 See Income Tax Technical News, no. 25, October 30, 2002 where CRA stated that it accepted the result in Silicon Graphics, although in the context of the CCPC definition, the appellate decision was of historical interest only in light of Paragraph (b).

9 Both Paragraph (c) and the definition of public corporation in subsection 89(1) were amended to replace "prescribed stock exchange" with "designated stock exchange" by S.C 2007, c.35, applicable on and after December 14, 2007.