Earlier this year, the Queensland Government announced that from 30 June 2023 Queensland land tax will be levied at a rate that is calculated with reference to a landholder's Australia-wide landholdings. This new approach is different from the way land tax has been calculated in the past and is inconsistent with the land tax regimes in all other Australian States and Territories. For that reason, the changes raise serious concerns not only about the additional land tax that will be payable, but also the added complexity, administrative burden of compliance and risk of unintended non-compliance.

The Government's justification for the change is that it closes a 'loophole' that previously resulted in landholders with landholdings across more than one jurisdiction paying less land tax than they would if they held the same land located in Queensland.

In this article, we examine the process for calculating land tax under the new rules (as compared to the current rules) and consider some hypothetical scenarios that are likely to impact certain taxpayers with landholdings in Queensland. This article does not address issues relating to surcharge land tax in Queensland as this is not impacted by the new rules.

Calculating land tax: prior to reform

Land tax is calculated annually on a State by State basis and, in Queensland, is triggered at midnight on 30 June each year. The rate of land tax is a sliding scale based on the aggregate taxable value (i.e. unimproved value) of freehold land, other than exempt land, in Queensland held by the taxpayer. The land tax free thresholds and rates of land tax differ depending on the type of landowner. For example:

Under the new rules, land tax in Queensland will be calculated as follows:

Once the changes come into effect, taxpayers who own land in Queensland and in another State or Territory will need to set up a QRO Online account to notify the Commissioner of their landholdings, and check that the QRO records are correct. This notification must include reference to the statutory value of each parcel of relevant interstate land, which is generally determined by reference to the relevant State or Territory land valuation legislation.

It will be more important than ever for taxpayers to check the details on any land tax assessment notice, because it is the taxpayer's responsibility to ensure that the details are correct and that the QRO is aware of all of their landholdings across Australia. If the QRO later identifies that land tax was underpaid (for example because they were not aware of certain relevant interstate land), they can issue a reassessment at any time which will likely include penalties and interest. If a taxpayer overpays land tax for some reason (for example if the QRO incorrectly identifies them as owning relevant interstate land) the taxpayer can seek a reassessment in their favour (however, only for five years after the original assessment is issued).

Example scenarios under the new regime

In the scenarios below, we consider a number of circumstances that may arise for taxpayers with landholdings in Queensland and another jurisdiction and the impact that the reforms will have on their Queensland land tax liability.

Scenario 1: Taxpayers with principal place of residence and investment properties

A common land ownership scenario is that of an individual landowner who owns a principal place of residence (PPR) and one or more investment properties.

Under the new rules, the annual Queensland land tax payable would be $5,550 as opposed to only $1,500 under the pre-reform rules as follows: 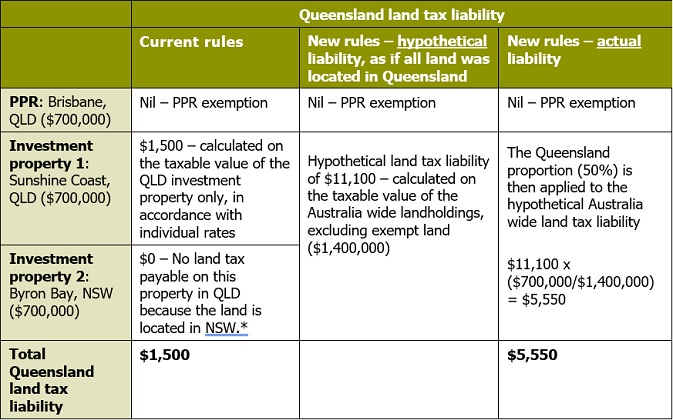 *Note that no land tax is payable on this land in NSW under either scenario because it is below the NSW land tax free threshold for individuals. The change to the Queensland land tax rules does not impact on the land tax payable in any other jurisdiction.

A scenario which demonstrates how the reforms are significant from a revenue raising perspective is that of a taxpayer with negligible landholdings in Queensland in contrast to its landholdings in other States or Territories. Consider a resident unit trust that holds land in Queensland with a low taxable value, and land in two other States with significant taxable values (neither of which is exempt land): 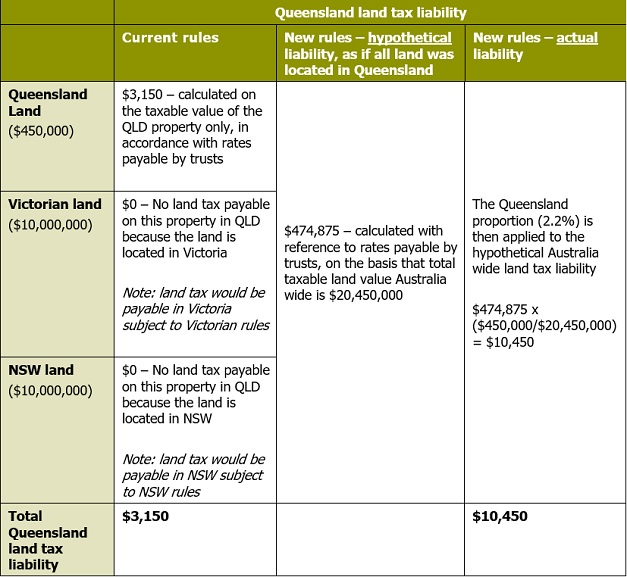 This example shows an increase in the Queensland land tax liability of over 300%!

Consider the example of a company (in which a public company or foreign person holds an interest) which owns properties in both Queensland and NSW that are used wholly and exclusively for a business of primary production (assume $10 million taxable land value in each jurisdiction).

In NSW, the landholder's property will be exempt from land tax because it qualifies for the primary production exemption from land tax.

In Queensland, new parcels that are created from a subdivision are valued separately under the Land Valuation Act 2010 (Qld).

This will generally cause the land tax liability of the landholder to increase (because a subdivision often results in the underlying land having a much greater total value than the original parcel before it was subdivided).

The new rules add a layer of complexity for property developers who undertake land subdivisions in other jurisdictions. A landholder will not qualify for a concessional valuation of interstate land (for the purposes of these new Queensland land tax rules) if a subdivision is registered under another Australian jurisdiction's laws.

Although no other jurisdiction has confirmed their intention to follow Queensland's lead with these changes, it is likely that other Australian States and Territories will consider the implementation of land tax rules similar to the new Queensland rules, particularly where it results in the collection of additional revenue.  Harmonisation would address many of the technical issues raised in this advice but would increase the overall impact on taxpayers.

What can taxpayers do?

The impact of these new rules is significantly reduced if landholdings are held across multiple different entities. This can include different subsidiaries within a corporate group or different trusts within a family group. Thought should be given to such structuring options when buying new land. This may have a number of benefits (in addition to managing the impact of the new Queensland land tax rules) including the management of foreign surcharge duty and land tax in different jurisdictions. For example, it may be useful to have NSW residential land held through a discretionary trust structure that irrevocably excludes foreign beneficiaries, however a separate trust without such exclusions for Queensland land may provide more flexibility

Where land in Queensland and other jurisdictions is already owned within a single entity, restructuring that ownership may provide some benefit from a land tax perspective however the transfer duty and tax implications of such a restructure should be considered.