Australia: A spoonful of innovation …

We're looking at another everyday object, so simple in design that you would think there was no space for innovation in today's world, but as you will see, the humble spoon defies this notion.

Spoons have been around for millennia. There is early evidence that Egyptian priests and pharaohs used spoons made of wood, stone and ivory. Spoons in later empires were made of metal. Today's materials also include plastics.

We use spoons for cooking, stirring and eating. Mary Poppins sung about the utility of spoons, while Alanis Morrisette did the opposite. Children, big and small, created spoony people during Covid, and populated Spoonvilles around the world. They are ubiquitous.

Spoons are primarily classified in the International Patent Classification (IPC) in A47G21/04 as part of the tableware class, which can be seen below.

If we look at the filing trend for this subclass we see very few filings until the 1970s. At that stage there was a surge in the filing numbers, followed by a flat period for about 30 years before another surge and an odd double peak. 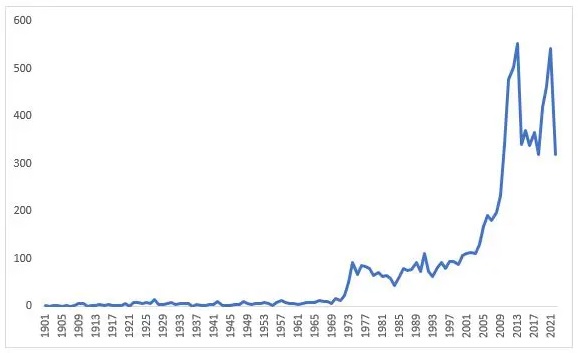 If we break the chart down into individual jurisdictions, we can start to understand why it looks as it does. 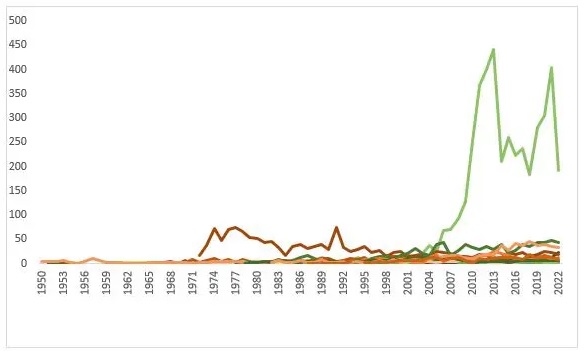 Most countries are lying in a rainbow heap at the bottom of the chart, but there are two standouts. They are China in green, and Japan in burgundy. 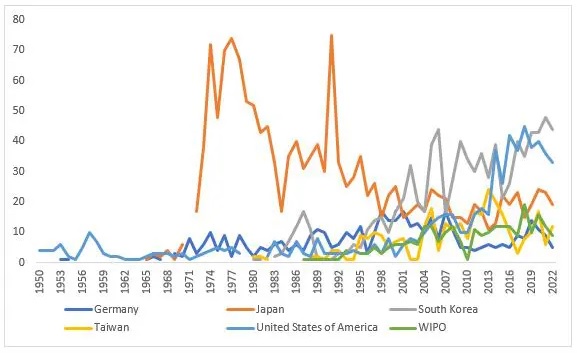 Now we can see that while Japan is still among the higher filers in this IPC subclass, there is also a lot more activity from the United States and South Korea, even if numbers are quite low in reality.

In my previous article on combs, the same pattern of Japan and China was evident. We glibly passed off the Japanese filings as relating to being well groomed, but now there's a pattern emerging, and we should look at that too.

In the chart below, we see Japanese filings over time. This is all filings in all classes. 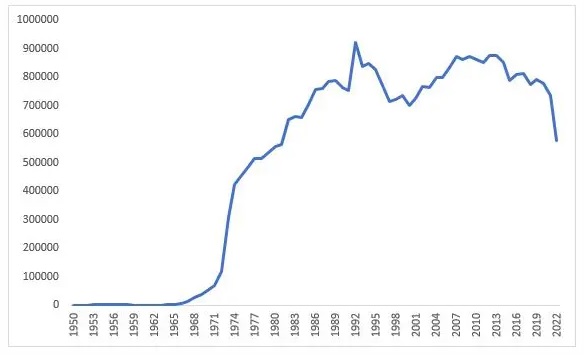 It is apparent that Japanese filings rose sharply in the late sixties and early seventies, and have maintained that level of filings for fifty years.

Here's a quote from Wikipedia:

Japan's economic growth in the 1960s and 1970s was based on the rapid expansion of heavy manufacturing in such areas as automobiles, steel, shipbuilding, chemicals, and electronics. The secondary sector (manufacturing, construction, and mining) expanded to 35.6% of the work force by 1970. By the late 1970s, however, the Japanese economy began to move away from heavy manufacturing toward a more service-oriented (tertiary sector) base. During the 1980s, jobs in wholesaling, retailing, finance, insurance, real estate, transportation, communications, and government grew rapidly, while secondary-sector employment remained stable. The tertiary sector grew from 47% of the work force in 1970 to 59.2% in 1990.

As economic activity took off, innovation and patenting followed. Spoon manufacturing may or may not fall into the category of heavy industry, but perhaps with the rising tide of innovation, all boats have risen.

Filings in China are currently following a similar path, but at a much greater scale.

So, what recent innovations can been found in the spoon drawer?

KR20210154931 looks at the hygiene angle. It relates to chopsticks as well as spoons, but the premise is that putting these utensils down on a table and then into your mouth is not a good idea due to the general festyness of said table. The solution is a small ridge along the handle to lift the bowl away from the table.

Also considering the hygiene angle is TWM620357 which is essentially a spoon that won't fall down, using a base to adjust the centre of gravity of the spoon so it stays upright, much like a Bobo doll or a Weeble. 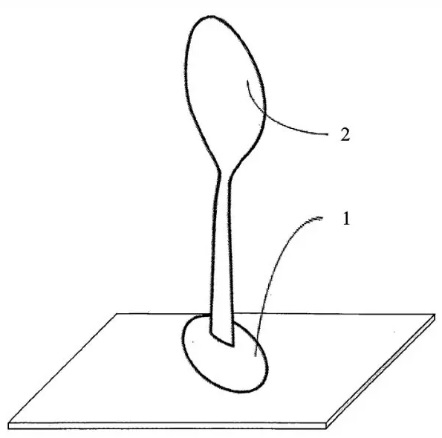 For those of you who like their spoons with a little more technology, here's TWM625208 that allows you to both weigh your food and measure its temperature. 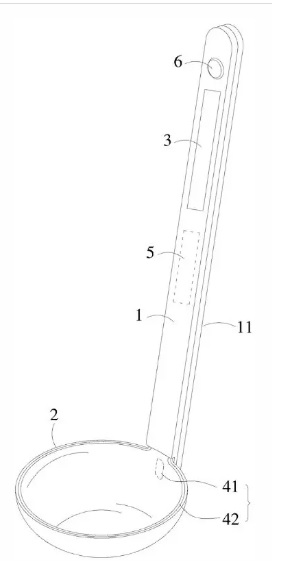 How about a solution for when there's no sugar on the table? US2021401203 describes a spoon with a packet attached to the handle so you have both the sugar and a means of stirring the beverage. It also describes a knife and fork with similar packets, presumably for salt and pepper, although the specification is silent on this point. 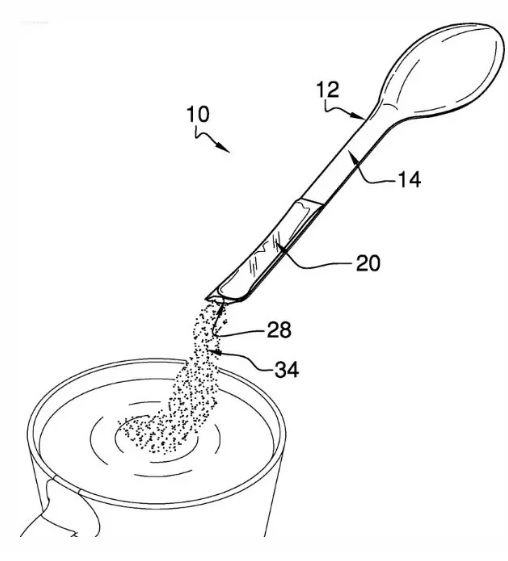 The next step after making a spoon that contains food, is to make the spoon itself into food. CN111296741 relates to a set of cutlery-shaped cutlery (it's in the specification!) formed from a slurry of flour, cheese, egg, lard, milk, gelatin and a bunch of other stuff, and then dried before baking. The cutlery can be coloured and flavoured, so you can mix and match with the meal of the day. The advantages of this particular invention over other like products are a better nutritional profile and a greater load carrying capacity.

You've heard of a spork, right? What about the sharpoon? US2021045555 describes a spoon with a sharpened edge, and it's used to cut through fruit or ice cream. It may be useful but I'm not sure if it's something I'd eat with. 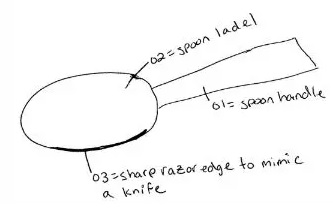 The weirder side of spoons aside, much of the innovation in spoons is either in the hygiene space, which is not surprising given the events of the last few years, or in producing a sustainable or environmentally friendly spoon, including those delicious edible ones. Spoons are inherently reusable but single use plastic spoons are being phased out, and alternatives are being developed using either wood, bamboo or paper fibres, or using biodegradable plastics. We should be glad of, and encouraging of, such innovation.

Insights into aspects of the subject matter, filings or companies can be obtained by digging around in the results of just about any patent search, simple or complex, and some of those aspects have been exemplified here.