Australia: The intellectual proper-tea of teabags: Necessi-tea really is the mother of invention

How do you make a cup of tea? Pot or cup...or mug? Loose leaves or a teabag? Milk first or last? Don't worry, this article is not about any of that.

You take a cup (or a mug), grab a teabag, and carefully place the teabag bit inside the cup, and then dangle the tag bit over the rim of the cup. So far, so good.

The kettle boils, and you lift it to pour water into the cup. The water hits the teabag, and the velocity of the water imparts sufficient momentum to the teabag such that the string and tag are pulled into the cup, which is now half filled with boiling hot water. You resort to fishing around for the tag, scalding your fingers (because it is always your fingers in that mad rush), and emitting a few words that will shame your family for generations.

It's an age old problem, but what have people done to solve it?

I conducted a very limited search* for teabag-related patents in PatBase, and culled anything not related to this topic. I finished with a set of about 50 patent families, from which I have determined these technology groups.

As with many things in life, it's complicated. Some of these technologies overlap, and I've had to make a decision as to which technology group some fall into.

Starting with technologies for cleats for tying off the string, I'll focus on the more permanent types, as the last group, 'Other', is directed more to temporary or removable devices.

Here are three examples. The first is a cleat head that can be attached to a cup or pot in any position with an adhesive or by suction, the second is a cleat head specifically for a handle, while the third is part of the handle design.

The next group, where there are grooves or incisions in the cup, appears to relate to paper cups, although there would be nothing to stop it being applied to a ceramic cup. The three examples below range from a single incision in the rim of the cup, to a more sophisticated shaped groove combined with a cleat arrangement at the base, to a slit in the side of the cup where the tag can be slipped into and secured. 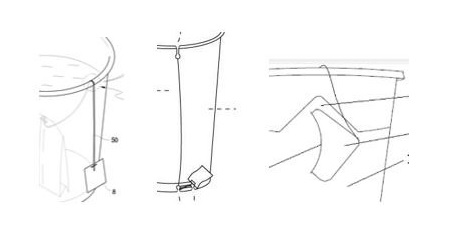 Moving to what is arguably the most popular method of solving the problem, we get to technologies involving sticky tags. The idea is simple. The tag has an adhesive or gum on one side, sometimes with a peelable cover, that allows the user to temporarily attach the tag to the outside of the cup, and provide sufficient counterforce to the poured water imparting momentum to the teabag.

It's pretty self-explanatory but here are a couple of examples. 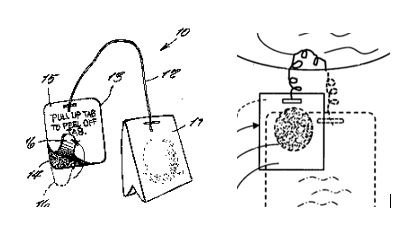 There is one notable example that is just that little bit different to the rest of this group. It also falls into the first group to some degree as part of this solution is a permanent addition to the cup or pot, and that's because it uses Velcro, with the hooks attached to the cup or pot and the loops attached to the tag. It does the job it is designed to do but is perhaps not the most environmental solution in this group. Here are a couple of images from the specification. 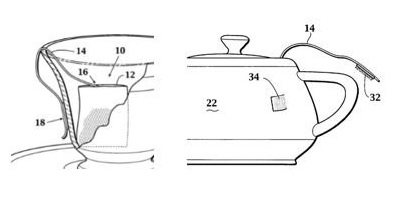 The next group also utilises a simple solution. Why not just make the tag so big that there is no way it could ever fall into the cup? Here it is, although admittedly it is part of a bigger idea to do with packaging and squeezing the wet teabag. 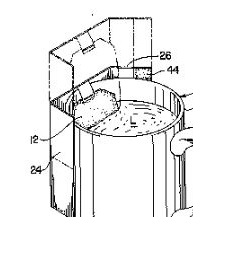 In addition to grooves and incisions in cups, we also find them in tags. There are two types: those with an incision within which the string can be secured after it has been wrapped around the handle, and those that have a larger groove that is wide enough to sit on the rim of the cup as a form of anchor.

The first example shown here is the closest to my preferred method where I slip the tag under the string to form a loose knot.

The last group in tag technology is the use of a pair of magnets, with one on the tag and the other on the teabag. The idea is that the two magnets attract each other through the wall of the cup. Again, this is not an environmentally sound solution. 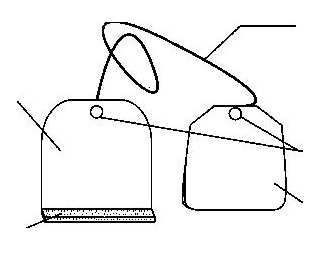 The third part of the modern teabag triumvirate is the string, and this has not been forgotten in a solution to this problem. The example here is also the earliest I have seen in patent literature, and dates to 1928.

I'm calling it semi-rigid string but it is an aluminium wire with a rudimentary teabag at one end and a tag at the other. The wire is rigid enough to be able to swirl the bag in the hot water, but also malleable enough to bend to form a hook to hang over the rim of the cup.

The very last technology group I have found is a bit of a catch-all class, but these devices are all removable or independent of the whole cup-teabag relationship, and some of them are a little wacky.

If you have an interest in making a bucket of tea, or in craning your teabag into the cup, then these two are for you. 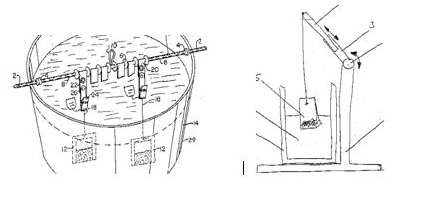 Next are a few devices that hang over the rim of the cup in some way. Most are reusable but the third image shows a folded piece of card, and so would be recyclable after its usefulness has ended.

Lastly, there is this. 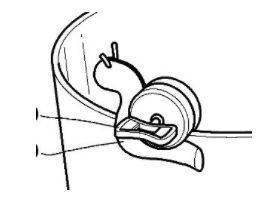 Not only does it hold the teabag and prevent the tag falling into the cup, but you can also wind it up and set it loose around the rim of your cup and swirl the teabag in the hot water at the same time.

There is one further teabag I found. It doesn't fit into the theme of this article but it demands to be mentioned. It looks simple enough, and this image gives it no justice. 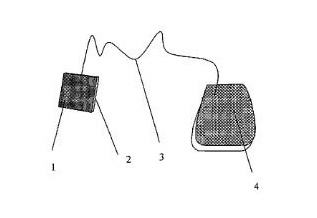 The innovation here relates to making the tag fluorescent, and the reasoning behind it is that a person might want to make a cup of tea at night, and in an effort to save energy, they don't need to turn on the light to find a teabag. No mention is made of the energy required to heat the water for said cup of tea, nor of a fluorescent teapot.

That ends our journey through the world of teabags. I hope you have found a useful way of preventing wet teabag tags and scalded fingers.