Michael Bacina and Jordan Markezic of the Piper Alderman Blockchain Group bring you the latest legal, regulatory and project updates in Blockchain and Digital Law.

The Reserve Bank of Australia (RBA), in conjunction with the Digital Finance Cooperative Research Centre (DFCRC) released its white paper into the CBDC pilot project this week. The project commenced in July 2022 and is at this stage expected to be completed around mid-2023.

Ellis Connoly, the Head of the RBA's Payments Policy Department, said of the pilot program:

[the RBA] sees potential for well-designed, well-regulated stablecoins to make a contribution to providing better services for Australian households and businesses... [it's] really important that we get the regulation of this right.

The initial research questions that were put to the RBA and the DFCRC were as follows:

The project intends to test a general-purpose pilot CBDC issued as a liability of the RBA for real-world use. The RBA has provided the following timeline with respect to the pilot program:

Use case providers will be industry participants responsible for the design and operation of their own technical platforms to implement their approved use case applications in the project.

The below figure outlines the interfaces for use case provider platforms to conduct approved functions. 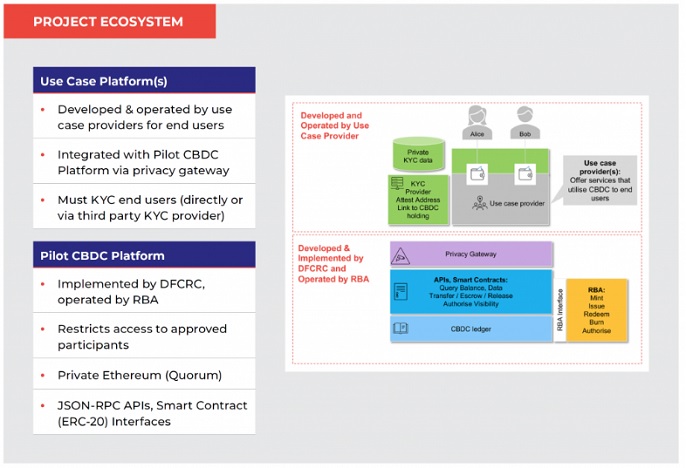 The report makes clear that the CBDC will be called the eAUD and will be a liability of the RBA and denominated in Australian dollars. The smallest denomination will be one cent.

The amount of eAUD in circulation will be capped at an amount to be determined by the RBA considering the requirements of selected use case providers. Holders of eAUD will also not be paid interest by the RBA, and only Australian-registered entities or residents will be eligible to hold eAUD.

The minimum functional capabilities of the eAUD platform and entities that perform the requisite functions are as follows:

The first holding structure is a direct liability of the RBA to the eAUD end user, and is represented by an individual holding of eAUD on the CBDC ledger by an end user, where the end user also has control of the private key to access their holdings.

The second holding structure is another direct liability of the RBA to an end user, with individual holdings on the CBDC ledger by end users, controlled by a use case provider on behalf of the end users.

The third holding structure is another direct liability of the RBA to a use case provider, who holds a commingled pool of eAUD on behalf of end users. In this regard, end users will have an indirect claim on the eAUD.

In any event, the report clarifies that the RBA will have visibility over transaction values and account balances, though not the underlying identity of eAUD holders, which will be held by the use case provider and/or KYC provider.

By way of distribution, the RBA will mint and issue eAUD – against the payment of the equivalent of Australian dollars – to approved use case providers and appropriate eAUD distributor. This distributor is intended to be an entity approved by the RBA which will distribute eAUD to use case providers that are unable to receive eAUD directly from the RBA.

At the conclusion of the pilot, all end users will be required to transfer their eAUD to their use case provider, who will subsequently reimburse the end user in the equivalent amount of Australian dollars. The RBA will destroy or burn all the eAUD that had previously been in circulation at the pilot's end.

The RBA and DFCRC have provided the following justification for why end users may seek to participate in the pilot program:

The emergence of a tokenised economy and new forms of money offer the potential to deliver new economic and social value, thereby contributing to the welfare of the Australian people. The eAUD project offers an opportunity to experiment and test new business models for current and emerging markets, on a platform designed for innovation. The involvement of the RBA and key regulators offers additional support for such exploration.

The DFCRC has called for submissions from industry participants of either use cases that utilise CBDCs as well as expressions of interest to operate their use cases in the pilot.