Section 105 of the Children and Young Persons (Care and Protection) Act 1998 (NSW) (the Child Protection Act) prevents the publication of the name and identifying details of a child or young person, who's in state care, out-of-home care or is involved with a Children's Court matter.

This is a prohibition on any publication or broadcast format – including online – that's accessible to a person in NSW. This barring of any public mention of a child extends until they're 25 years old or they die. And this ban does apply to the parents of a child who's been removed.

Breaching section 105 is an offence that carries a maximum penalty of up to 2 years in prison or a $22,000 fine.

During a 2017 NSW Supreme Court case, Justice Paul Brereton set out that the primary reason for this suppression order is to protect the child in question from stigma. However, in that matter, the justice found that the release of information regarding a child was in the public interest.

However, according to Dr Andrew Katelaris and Paul Robert Burton, rather than protecting vulnerable children from harm, the section 105 gag is leading to the suppression of any criticism of the system of child removals run by the NSW Department of Communities and Justice (DCJ).


Katelaris and Burton both fell foul of the section 105 suppression law in 2017, when, without realising they were contravening any law, they referred to a young child who'd been removed from their family in a series of social media posts.

Burton was alleged to have posted the messages – which included footage of discussions he and Dr Katelaris had about the case – on his Facebook page in July 2017. These posts breached section 105 as they contained the child's name, as well as a number of other identifying details.

Prior to the committal hearing, the pair challenged these charges to Local Court Magistrate Ron Maiden, claiming that the section 105 prohibition is unconstitutional as it encroaches upon the right to freedom of political expression that's implied in the Australian Constitution.

But as the magistrate failed to agree with their argument, the pair sought a judicial review of section 105, and the Local Court granted their request.


The matter went before NSW Supreme Court Justice Richard Button on 28 July. Burton represented both himself and Dr Katelaris against four senior counsels.

The doctor did assert during the hearing that section 105 is draconian in its reach by design, and it silences journalists, as well as families.

In opposition, the NSW attorney general and the NSW Director of Public Prosecutions argued that the review was void as the magistrate did not have the authority to deliberate upon the matter in the lower court because a committal hearing is administrative, which rules out the right to review.

And for now, Justice Button is deliberating on the matter. 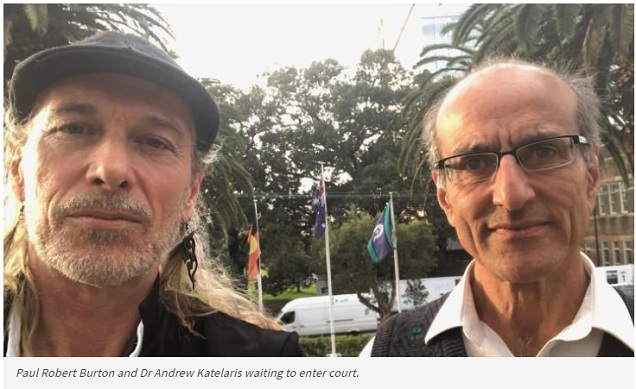 Sydney Criminal Lawyers spoke to Paul Robert Burton about the impact the 105 suppression law coupled with the practice of warrantless removals is having on this state's child removal system, and why he and the doctor have resolved to attempt to have the section repealed or at least amended.


Primarily, the legislation is to protect the best interest of a child. So, that's what it's ostensibly for.

But, as particularly highlighted by the Allanna Smith matter with Willian Tyrell, Justice Brereton set out that section 105 was intended to protect a child from stigma.

It was to stop people talking about matters such as the sexual abuse of children, which could lead to a child being persecuted. This is what section 105 was intended for.

But what's happening in my case and many others is that it's doing a disservice because it's so draconian in its construct and wide in its scope that it actually stops anyone challenging the government over any wrongful removal of a child.

The reason we're challenging the constitutional validity of section 105 is that we believe it is unconstitutional as it stops parents mentioning their child, because it becomes an offence.

So, it becomes an offence for a parent to wish their child a happy birthday. It's a gaolable offence. And we argue that's not constitutional.


It's absolutely horrific. I know a mother whose child was removed, and she wants to write a book about what happened to her family, so she can help other people. But she can't. She can't talk about her child even though they have him back.

This is why section 105 needs to be challenged, because it's clearly infringing upon people's implied right of political expression.

For example, if a child removal is unlawful, if it's done in the wrong way, if there's any kind of error in the process by the government, no one can speak up about it.

So, in NSW, most children that I know of having been removed – that's 130-odd cases – are all warrantless removals under section 43 of the Child Protection Act.

These warrantless removals are done without judicial oversight. Rather they're based on the opinions of a social worker, and quite often they're based on hearsay. This isn't an evidence-based system.

They are then supposed to go into the Children's Court to do a section 45, which is to explain to the court why the child was removed without a warrant.

But I have never seen a section 45 take place. The Children's Court doesn't seem to be following its own statutory obligations.

No one has ever seen a section 45. There hasn't been one in any case that I've ever seen.


In my view, because of the closed Children's Court – which is nothing more than a rubber stamping of DCJ decisions – what's happened is that children can be removed for profit.

It's become an industry. Children have become financial units.

So, rather than assist a family when they're in need, the exact opposite is happening. And we see this repeatedly.

When these reports about child removals – like the Tune report – come out, they say there's a high representation of Indigenous people in the system, so they then conclude that they're not doing their job correctly as these people keep coming back into the system.

But what we're arguing is that they're not coming back into the system, but they're actually targeted. So, if you're removed from your family, then you become a flag in the system, which will see your children removed.

A mother who says that she was a victim of abuse, then becomes a victim again because the system targets her.

It's a shocking situation that we're struggling to raise awareness about because people cannot believe that it's failing to the degree that it is.


By the end of this year, the industry will be 100 percent privatised. So, they remove the children, but they don't look after them.

The children are given to private agencies to care for them, and they're then provided with payments to do so.

So, the profit is in the agencies' payments. A normal child begins with a $40,000 payment. They have to have the contract before they remove the child.

And the more compromised a child the more they're worth. So, they're targeting children with disabilities.

There was a television program about the child that went out to four million people, which breached section 105. Everybody in the country was talking about it.

However, they only took me and Andrew into the Equity Division of the NSW Supreme Court to suppress us six weeks later. Then they only charged us under section 105 six months later.

It was clearly to shut us up. We have known that all along.


Firstly, what I want to see happen is I want the public to be able to scrutinise this.

Andrew and I raised what we call damnatio memoriae, which is a Latin term that we interpret as by removing someone's identity from everything, it doesn't protect them.

We believe it is putting many children at a much greater risk. We already know that many children disappear into the system, when they don't have parents to represent them and they're silenced. We don't know where they are.

I want parents to get support. Most of the families I've dealt with need support. It's very rare for a child to be completely abused by a parent. It does happen, shockingly. But it's very rare.

The removal of children is one of the most invasive things the courts do. The damage to the parent and the alienation is unbelievable.

The ripping of children from parents causes more psychological damage in the future. It causes issues with addiction. It creates a whole lot of people who end up in the prison system or on medication. It messes people up.

It does damage to the soul, and it blocks people from finding peace in their lives.

I'm not really so fussed about my personal position. I was determined to pursue this because what happened to us was wrong and what happens to families and children is so wrong, that I just couldn't live with it on my conscience.

I had to do whatever I could. I am obliged to.

ARTICLE TAGS
Australia Family and Matrimonial Family Law
POPULAR ARTICLES ON: Family and Matrimonial from Australia
Testamentary Trust – What is it and should you use one as part of your succession plan
Pointon Partners
One of the most powerful modern estate planning strategy is the use of a testamentary trust in your Will.
Time to revisit financial agreements - Business News
HHG Legal Group
A financial agreement is a contract between a couple which can protect the assets brought into the relationship.
Conveyancing and your family law settlement
Cooper Grace Ward
The video discusses the conveyancing process and how to transfer or sell property as part of a family law settlement.
Home Buyer Concession Scheme, Canberra, ACT
Parker Coles Curtis
ACT legislative changes may assist separated partners to get back on the property market after a break-up or divorce.
de facto or de fact-no? How do I know if I am in a de facto relationship?
Parker Coles Curtis
The Family Law Act defines a de facto relationship and also provides some factors that a Court would consider.
[Video] Add-backs in family law property settlements
Cooper Grace Ward
An add-back is an asset or an item which should have existed in the property pool, but has been spent or wasted.
FREE News Alerts
Sign Up for our free News Alerts - All the latest articles on your chosen topics condensed into a free bi-weekly email.
Register For News Alerts
Article Tags
Australia Family and Matrimonial Family Law
Related Articles
Surviving an abusive relationship: an exit strategy Bartier Perry
What happens where two parents cannot agree on the vaccination status of their children? Kells
#Free Britney: What happens in NSW if you lose capacity to look after your own affairs? Kells
Family law - what if I do not agree with the single expert report? Cooper Grace Ward
Parenting arrangements and Christmas – no cheer from the Federal Circuit and Family Court of Australia Cooper Grace Ward
Mondaq Webinars
Investigations and eDisclosure: Drive Down Costs by Understanding Key Data Points Early
OpenText UK Limited
Webinar Berkshire UK
Future Series: Oh Canada! Key Legal Issues for International Companies
Borden Ladner Gervais LLP
Webinar Toronto Canada
More Webinars
Comparative Guides
Alternative Investment Funds
Anti-Corruption & Bribery
Data Privacy
Environment and Climate Regulation
Insurance
More Guides
Mondaq Advice Centres
Global
Trademarks in SAARC Countries
More MACs