by Patrick Holland , Kate Swain and Elizabeth Ryan
McCullough Robertson
Your LinkedIn Connections
with the authors

The NSW Government has commenced implementing the Employment Zone Framework following the range of reforms introduced in December 2021. These changes will replace existing industrial and business zones to bring new 'employment zones' and 'supporting zones' aiming to benefit businesses and productivity while minimising land-use conflict.

In December 2021, the five new employment zones and three supporting zones were formally introduced to the Standard Instrument (Local Environmental Plans) Order 2006 to exist alongside the existing business and industrial zones. The changes were introduced by the NSW Government with key aims including maximising productivity while ensuring the zones are 'fit for purpose', addressing current barriers in the planning system for businesses, and better supporting councils in delivering strategic visions in their Local Strategic Planning Statements.

The new zones are:

These changes follow the recommendations made by the NSW Productivity Commission's White Paper on Rebooting the Economy which recommended consolidating employment zones. The new zones are set to commence on 1 December 2022 via a self-repealing State Environmental Planning Policy which will introduce the new zones into local environment plans and the existing Business and Industrial Zones will be repealed. The NSW Government has further released a diagram showing the general switch from the previous zoning system to the new zones: 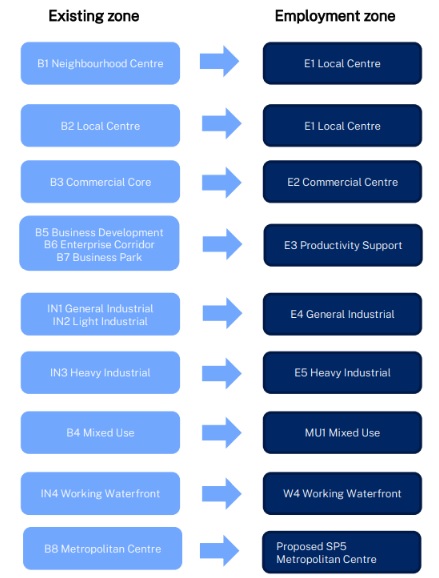 What the changes mean for you

For landowners and other site users, these changes may adapt your land zoning. For example, if your land was previously zoned 'B2 Local Centre zones' this zoning will be removed and will be replaced with a new zone, such as 'E1 Local Centre'. In effect, some zoning changes may also change the permissible uses for the land.

For local councils, there will be a range of changes to land zoning and local environment plans to accommodate the changes. Most recently the 'Employment Zones Reform Implementation Explanation of Intended Effect' (Explanation) has been released to provide more context on the intended implementation of the employment zones, as well as further details for proposed future amendments, including amending the mandated objective for the E2 Commercial Centre Zone, changes to some land uses that gain permissibility from a State Environmental Planning Policy (SEPP), and changes to the mandated permitted with consent land uses for the SP4 Enterprise Zone.

This Explanation was open for comment until 12 July 2022, further details are available here. After feedback has been reviewed, the NSW Department of Planning and Environment is proposing to release the self-repealing SEPP in October 2022 ahead of the 1 December 2022 commencement.

We thank Yasmin Box for her contribution to this article.