TRANSFER OF DATA BY AUSTRALIAN ORGANISATIONS TO OTHER JURISDICTIONS IS INCREASINGLY COMMON.

This is a result of IT service providers using personnel and infrastructure in low cost jurisdictions such as India to service Australian based clients. The cloud computing industry alone is now worth nearly $2 billion in Australia and about half of this is spent on public cloud services. Eighty six per cent of Australian businesses now report that they use cloud services.1

While there are onshore data processing options available in the marketplace (including 'Australianonly' clouds2), these may not offer the customer the same benefits (e.g. economies of scale, affordability) as offshore options.

There are a range of commercial risk and regulatory considerations that any customer or supplier considering offshoring data needs to assess. In particular, new laws govern the 'disclosure' by Australian organisations3 of personal information4 to overseas recipients from 12 March 2014.5 This note addresses some of the relevant issues.

The new law gives the Privacy Commissioner more powers, including:

HOW DO THE APPS GOVERN 'DISCLOSURES' OVERSEAS?

APP 8 requires that before disclosing personal information to a person that is outside Australia (an overseas recipient), an Australian organisation must:

STEP ONE: IS THE DATA TRANSFER A 'DISCLOSURE'?

APP 8 does not apply unless the personal information is 'disclosed' to an overseas recipient.

Is the transfer a 'disclosure' or a 'use'?

The Office of the Australian Information Commissioner (OAIC) has suggested that a 'disclosure' occurs when information is released from an entity's effective control.8

In the context of cloud services, the OAIC is of the view that a transfer of personal information will not be a 'disclosure' if the service provider is only storing the data and certain contractual protections are implemented:

However, the OAIC has also given guidance that the following service provider arrangements will involve a 'disclosure':

It is interesting that neither the new law, nor the OAIC guidance, deals with encryption of personal data in the context of APP 8. Arguably, if a customer encrypts personal information before providing it to its service provider, no 'disclosure' of the personal information will occur.

It is important to recognise that OAIC guidance10 in relation to 'disclosure' is not legally binding. However, prudent organisations will take note of the regulator's guidance when implementing compliance procedures.

Based on the Explanatory Memorandum for the new law, we can be confident that the following acts will constitute a 'disclosure':

Transferring personal information outside Australia: 'use' or 'disclosure'? 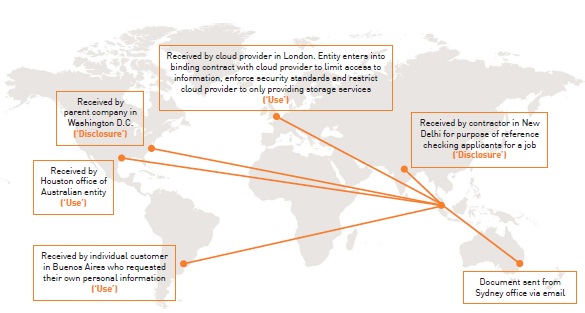 Further, a transfer of personal information within the same corporate entity is not considered a 'disclosure', even if that transfer is to an overseas office of the same entity.12

The diagram below is a visual representation of the acts that may constitute a 'disclosure' to an overseas recipient.

STEP TWO: 'REASONABLE STEP'S TO ENSURE THE SERVICE PROVIDER DOES NOT BREACH THE APPS

Assuming that a 'disclosure' has taken place and it is received by an overseas recipient, the consequence is that an Australian organisation must take reasonable steps to ensure that the overseas recipient does not breach the APPs.

Parliament has suggested that reasonable steps will normally require that an entity enter into a contractual relationship with the recipient.13

The OAIC has also gone a step further, specifying contractual conditions that it believes may be sufficient to satisfy the 'reasonable steps' requirement:

Exception 1: where consent is obtained

The OAIC has suggested that valid consent will be given where:

Exception 2: where the overseas recipient is subject to substantially similar laws

An entity will not need to ensure the overseas recipient complies with the APPs if the entity has a reasonable belief that the person outside Australia is subject to laws substantially similar to the APPs.

What constitutes a reasonable belief?

A reasonable belief is more than merely a 'genuine or subjective belief'. The OAIC suggests that it is the responsibility of the organisation to justify its 'reasonable belief' if there is a dispute. One example that the OAIC gives is where an organisation has obtained independent legal advice on the foreign privacy protections.

What are substantially similar laws?

Laws which are substantially similar do not necessarily need to requote the protections in the APPs. Rather, the 'overall effect' of the law is the determining factor.

The OAIC hasn't been willing to disclose a "white list" of countries that it considers to have substantially similar laws to Australia, but the EU white list16 may be a good starting point for an analysis (the list includes, for example, Switzerland, Argentina and New Zealand). It is prudent to seek legal advice as to whether the country where an overseas recipient is located is subject to substantially similar laws. In the context of cloud computing, this may involve considering the laws of each of the jurisdictions in which the service provider's infrastructure is located.

The OAIC has published its own guidance as to what it will take into account when considering foreign privacy laws:

The last element is that the similar laws must have enforcement mechanisms that are accessible to an individual whose personal information is 'disclosed'. An equivalent body of the OAIC or courts with similar functions and powers will be a necessity.

Australian organisations are also required to take appropriate security measures to protect any personal information from misuse, interference and loss and from unauthorised access, modification or disclosure.20 Security may need to be more rigorous if the information is sensitive or the potential consequences for the individual, if the information were disclosed, are severe.

Depending on the industry the organisation is in or for government agencies, there are additional laws that may also apply to offshore data transfers.

Commonwealth Government agencies are subject to separate, stringent rules when they choose to outsource or offshore data (Attorney-General's Guidelines for Outsourced or Offshore ICT Arrangements). For example, where personal information is sent offshore or placed in a public cloud service arrangement, the agency must first obtain the consent of both the Attorney- General and the Minister responsible for the agency.

There are special data management requirements for financial institutions (APRA Prudential Practice Guide CPG 235). These include ensuring that all contracts for the outsourcing of data (not just personal information) include special conditions relating to the handling of that data. APRA suggests that these include terms covering business continuity management and that a risk assessment procedure be established before these arrangements can be entered into.