by Tim O’Callaghan , Jack Dean and Travis Shueard
Piper Alderman
Your LinkedIn Connections
with the authors

Last week, the Australian Competition and Consumer Commission (ACCC) announced that it had commenced proceedings in the Federal Court of Australia against the owner and operator of Facebook, Meta Platforms, Inc. and Meta Platforms Ireland Limited (collectively, Meta).

The ACCC alleges that Meta engaged in false, misleading or deceptive conduct by publishing scam advertisements featuring prominent Australian figures such as David Koch, Dick Smith, and former NSW Premier Mike Baird in contravention of the Competition and Consumer Act 2010  (Cth) (CCA) and/or the Australian Securities and Investments Commission Act 2001  (Cth) (ASIC Act). It is further alleged that Meta aided and abetted, or was knowingly concerned in false or misleading conduct and representations.

The allegations concern a number of ads promoting cryptocurrency or money making schemes published on Meta's platform, Facebook. The ads contained links which directed Facebook users to a landing page which featured endorsements from well-known figures, none of whom actually endorsed or approved of the schemes. An example of such a scam ad involving Australian billionaire Andrew Forrest is below - 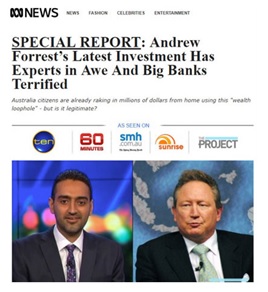 The ACCC alleges that, by publishing such ads and allowing them to remain on its platform, Meta is responsible for the ads.

In 2021, Meta's global advertising revenue was US$115 billion, while Scamwatch figures show that in the same year, consumers lost $99 million to cryptocurrency investment scams.

Further, the ACCC alleges that Meta was aware  that the scam ads were being displayed on Facebook, and failed to take steps to remove them, even after receiving a number of complaints from several public figures the subject of the scams, resulting in potential harm to consumers. In one case, a consumer lost more than $650,000 due to such a scam.

Also of note, the ACCC referred to Meta's technology and how it was key to the Facebook business model to offer advertisers the ability to target users who are more likely to click on a link, who it is to be assumed are often more vulnerable users of Facebook:

"It is a key part of Meta's business to enable advertisers to target users who are most likely to click on the link in an ad to visit the ad's landing page, using Facebook algorithms. Those visits to landing pages from ads generate substantial revenue for Facebook."

Additionally, the ACCC has alleged that Meta 'assured its users that it would detect and prevent spam and promote safety on Facebook', but failed to do so. While harm was suffered by consumers, the reputational damage to the public figures is also of importance to the ACCC, Mr Sims said.

The ACCC pleading under the ASIC Act is also of interest given that, in doing so, it is likely that the ACCC has alleged that Meta has engaged in conduct in relation to a financial service that is misleading or deceptive under s 12DA of the ASIC Act. In resolving this, the Federal Court will need to consider whether Meta's conduct in publishing the scam ads was related to a financial service, as defined under s 12BAB of the ASIC Act.

The announcement follows Andrew Forrest, iron ore giant and one of Australia's richest people, commencing criminal proceedings in the Magistrates Court of Western Australia against Meta for using his image to promote cryptocurrency schemes in February this year. Mr Forrest has alleged that Meta was "criminally reckless" and breached Australia's money laundering laws by failing to prevent scam cryptocurrency advertisements. Mr Forrest also launched similar proceedings last year against Meta in the Superior Court of California.

The ACCC announcement serves as a stern warning for Meta and other social media platforms that the ACCC and other regulatory bodies are now prepared to take action against platforms who allow infringing content to remain available to consumers.