The quarterly index tracks the default rates of senior secured and unitranche loans.

"We saw another significant drop in the default rate this quarter, reflecting the improvements we are seeing across our practice." said Stephen A. Boyko, co-chair of Proskauer's Private Credit Group.  "While we are not out of the woods,  we have seen a large number of loans return to performing credits, and we expect that trend to continue for the foreseeable future", said Boyko.

Companies with more than $50 million of EBITDA at the time of origination had a 1.0% default rate continuing a downward trend in the default rate from a peak of 5.3% in Q2. 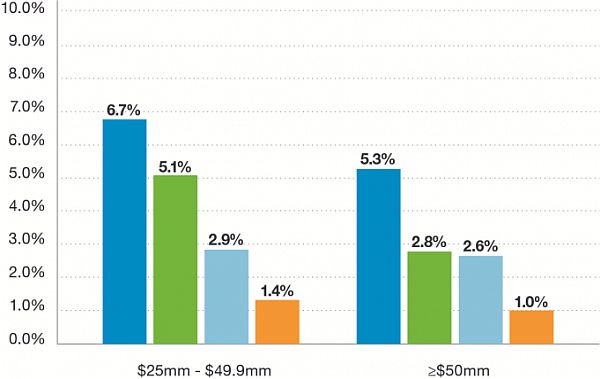 The Index also includes several proprietary features for clients including an analysis of defaulted loans by industry including: consumer/retail, food/beverage, healthcare, manufacturing and software/technology by EBITDA band (0-$25mm, $25-49.9mm, and $50mm+) by default type (payment, bankruptcy, financial covenant, other material default, etc.) and by comparison to the publicly reported default rates for leveraged loans as reported by the rating agencies.

The Proskauer Private Credit Default Index includes 721 active loans in the United States representing $131.1 billion in original principal amount. We have attempted to keep our database as a living repository to reflect market conditions as accurately as possible. While the influx of new deals may drive down overall default rate we believe it is a more accurate portrayal of the health of the market. The Index includes companies across all major industry groups with EBITDA (earnings) from $0 to more than $1 billion.

Our Index is based on U.S. dollar denominated senior secured and unitranche loans. Default rates are calculated by dividing the number of defaulted loans by the aggregate number of loans in the Index. While there are varying conventions of what is considered a default for purposes of calculating a default rate, the Index includes loans that have a payment, financial covenant or bankruptcy default, loans that are otherwise in default if the default is expected to continue for more than 30 days (excludes immaterial defaults) and loans that were amended in anticipation of a default. A default is assumed to take place on the earliest of:

For the purposes of the index, if a borrower re-emerges from bankruptcy, or otherwise restructures its defaulted debt and reestablishes regular, timely payment.

The Private Credit Group continues to create tools that offer unique insights to their clients, including an annual survey that features predictions from top lending institutions, which compliments the findings of Proskauer's proprietary Private Credit Insights annual report.

As a market-leading advisor to the private credit industry, Proskauer has assembled a cross-disciplinary finance and restructuring team exclusively dedicated to private credit investors. This team includes over 75 restructuring and transactional lawyers focused on representing credit funds, business development companies, and other direct lending funds in the restructuring of "clubbed" and syndicated credits and preferred equity investments.

Over the past five years, Proskauer has worked on more than 800 deals for more than 75 private credit clients across the United States and Europe with an aggregate transaction value exceeding $150 billion.