Education is the key to development of societies and the driver of its progress. Despite efforts by the state to implement reform-oriented educational policies, and the allocation of substantial resources to spending on education and developing government schools to accommodate the steady increase in classroom density, the government remains unable to provide an acceptable quality of education.

The education system in Egypt faces many problems, including high classroom density, multiple-shift schools, and weak facilities and technological aids. This has weakened students' ability to understand, discuss and research, rendering teaching to a mere memorization effort. Hence the necessity to shift education provision from being solely the responsibility of the state to expanding partnership with the private sector. This is dictated by reality and would reduce the burden on the public budget and address the education needs of the well-off segments of society.

Specifically, this study aims to highlight the licensing procedures for establishing private basic education schools that employ the Egyptian national system of education. The purpose is to determine the most important obstacles and suggest solutions that would encourage the private sector to utilize its potentials in funding and developing the educational system. This would be achieved through facilitating procedures of establishing private schools, and developing legislations that allow a fair rate of return on investment in this field.

According to the Central Agency for Public Mobilization and Statistics (CAPMAS), private schools are concentrated mainly in major governorates such as Cairo, Giza and Alexandria, while they are almost minimal or non-existent in some governorates in Lower and Upper Egypt. Figures 1 and 2 below show the percentage of students registered in primary and preparatory private schools in each governorate in 2012/2013:1 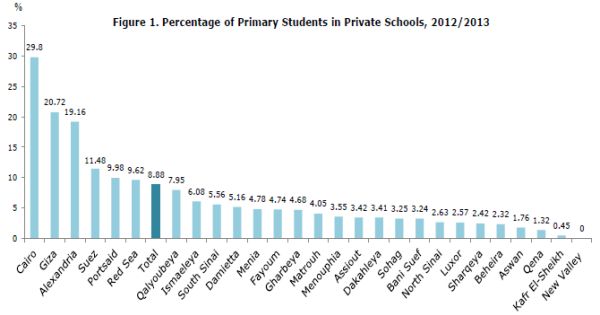 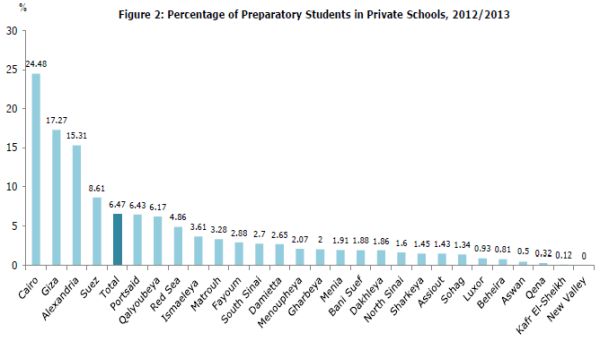 Scope of the Study

This study addresses licensing procedures for establishing and operating private schools (Arabic and language schools) that employ the national education system. It covers basic education stages only (primary and preparatory stages) in Cairo and Giza.

The study relies on the following laws and regulations:

The study begins with a short review of the licensing procedures for establishing and operating private schools in Egypt. It then proceeds to discuss some of the problems and constraints encountered in each stage.

LICENSING PROCEDURES FOR ESTABLISHING AND OPERATING PRIVATE SCHOOLS IN EGYPT

In general, licensing procedures begin with founding a company owning the private school, then assigning a legal representative of this company to undertake all licensing procedures for establishing and operating the school. The school's legal representative submits to the concerned mudereya (the Educational Administration) an application to establish a school, using a specific form. After fulfilling all document requirements as indicated in the form, the applicant obtains a preliminary approval to begin school establishment procedures. The next stage includes preparing the architectural drawings for the school and submitting them to the General Educational Buildings Authority for approval.

Obtaining approval from the Educational Buildings Authority on the architectural drawings of the School is the most time-consuming procedure and one of the most complicated; as it could take almost over two years. This is due to the following:

Obtaining a permit for building a school from the district authorities

The applicant has to obtain a building permit from the concerned district authorities, which may reject the architectural drawings, although they were approved by the Educational Buildings Authority at an earlier stage, or because land allocation cannot be changed to educational purposes. This drives the applicant to build the school without a permit and therefore becomes subject to judiciary procedures that may be taken against him/her.

The mudereya Educational Administration forms a technical committee to inspect the school building and compares it against the drawings previously approved by the General Authority for Educational Buildings.

Article 36 of Ministerial Decree No. 420/2014 stipulates the procedures for increasing school fees based on a decision by the Minister of Education specifying school fees brackets. The request to increase fees entails complicated procedures and requires the approval of several administrative authorities, starting from the mudereya Educational Administration all the way to the Minister of Education himself.

The government sets a specific percentage of increase in tuition fees with a view to protecting parents from exaggerated fees. In this respect, the interests of private school owners should also be taken into account, especially in light of increasing annual inflation rates. This will prevent private school owners from resorting to other means of fundraising from parents such as school uniforms, parties and donations, etc.

Finally, the state is well-advised to support and encourage the private sector to invest in the educational sector, which requires, inter alia, reforming/developing laws and regulations that allow a fair return on investment in the field of education, and hence attract investors to this vital area. Facilitating procedures for establishing private schools and eliminating obstacles encountered by private school owners are also of the essence.

To be sure, increased private sector participation in the provision of educational services in Egypt does not mean that the state will abandon its role in providing free education or increase the financial burden on the parents. Rather, it creates diversity in educational and teaching methods, and thereby eases the pressure on public schools. This will create a positive atmosphere of competition and eventually improve the quality of education provided.

The amended Constitution of the Arab Republic of Egypt, Official Gazette, issue no. 3, January 18th, 2014.

Soundness standards and requirements for school sites and buildings, public primary and secondary schools located in cities and villages, as issued by the General Authority for Educational Buildings in 2013 (or the so-called book of terms and conditions).

Soundness standards and requirements for school sites and buildings, public primary and secondary schools located in new urban communities, as issued by the General Authority for Educational Buildings in 2011 (or the so-called book of terms and conditions).

A report on "Education for All 2015 National Review Report: Egypt" by the National Center for Pedagogic Research and Development, Ministry of Education, based on a call from the UNESCO-Egypt, accessible at http://unesdoc.unesco.org/images/0022/002299/229905e.pdf

ARTICLE TAGS
Egypt Consumer Protection Education
POPULAR ARTICLES ON: Consumer Protection from Egypt
Saudi Arabia introduces New E-Commerce Law
DLA Piper
The Kingdom of Saudi Arabia (KSA) continues its journey to realize the Vision 2030 by creating a thriving economy that is open for business. With a global expansion in the size of the e-commerce
Consumer Protection And The Laws Relating To Consumer Protection In The UAE
STA Law Firm
"A customer is the most important visitor on our premises. He is not dependent on us. We are dependent on him.
A Brief Look At Consumer Rights In Terms Of The Consumer Protection Act
Schoemanlaw Inc.
In recent times November has become the favorite month for South African consumers with the adoption of sale specials like Black Friday and...
New Bank Of Tanzania Regulations On Financial Consumer Protection
Clyde & Co
In this article, we provide an overview of the new Bank of Tanzania (Financial Consumer Protection) Regulations 2019 (the Regulations) which were published in Government Notice No. 884 on 22 November 2019.
The Rights Of A Consumer Under The Federal Competition And Consumer Protection Act Of Nigeria
Fred-Young & Evans
A consumer is any person who purchases or offers to purchase goods, products and commodities for consumption. This includes person to whom services are rendered.
A Critical Evaluation Of The Credit Reporting Act 2017 – Practical Issues Arising
Greychapel Legal
The Credit Reporting Act ("the Act") was enacted on the 30th day of May 2017 with the primary objectives of promoting access to credit information and enhancing risk management in credit transactions.
FREE News Alerts
Sign Up for our free News Alerts - All the latest articles on your chosen topics condensed into a free bi-weekly email.
Register For News Alerts
Article Tags
Egypt Consumer Protection Education
Related Articles
New Egyptian Consumer Protection Law Riad & Riad Law Firm
New Consumer Law 181/2018 Maher Milad Iskander
Setting Up A University In Egypt Al Tamimi & Company
Comparative Guides
International Arbitration
Mondaq Advice Centres
Global
Investment Immigration
Global
Trademarks in SAARC Countries
More MACs