by Yeo Eng Ping , Lim Kah Fan , Amarjeet Singh , Farah Rosley , Chow Seong Chen and Chan Vai Fong
Ernst & Young
To print this article, all you need is to be registered or login on Mondaq.com.

Waiver and remission of tax penalty

The Malaysian Inland Revenue Board ("IRB") has recently announced that there will be a waiver and remission of tax penalty to encourage voluntary disclosures and early settlement of tax arrears.

How can this benefit you?

Taxpayers deriving income from Malaysia and looking for opportunities to regularise their tax positions may apply for the reduction of penalties and/or waiver of increase of tax.

Note:
*Excludes companies whose tax files are handled by the Multinational Tax Branch or the Petroleum Branch of the IRB

The tables below set out the current penalty regime under the tax law and the concessionary rates applied by the IRB in practice: 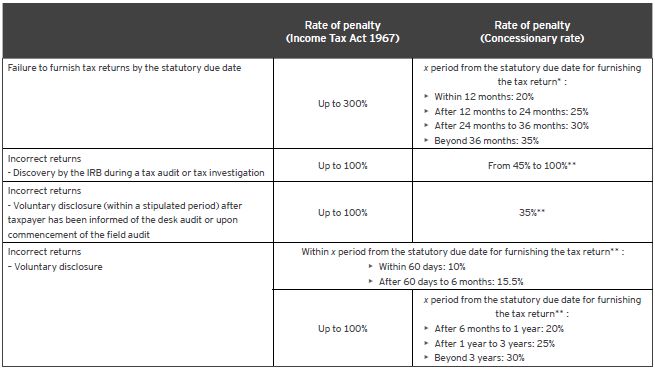 Notes:
*Rates of penalty for the late submission of tax returns are extracted from the "Garis Panduan Operasi Bil. 1 Tahun 2015" issued by the IRB on 5 March 2015.
**Based on the Tax Audit and Tax Investigation Frameworks
***Based on the Income Tax Act 1967

The recent IRB announcement aims to reduce the current concessionary penalty rates and waiver of tax increase. However, the amnesty* does not indicate the rate of reduced penalty.

Notes:
*The IRB's conditions for amnesty are outlined as follows:
> The eligibility of the offer depends on the merits of the taxpayer's case
> It is subject to relevant regulations issued by the IRB
> It is not applicable to taxpayers whose tax files are handled by the Multinational Tax Branch or the Petroleum Branch of the IRB

ARTICLE TAGS
Malaysia Tax Income Tax Tax Authorities Withholding Tax
POPULAR ARTICLES ON: Tax from Malaysia
RoDTEP Scheme Vs. MEIS Scheme: Fact Sheet
Asit Mehta & Associates
It was recently announced that a new scheme, RoDTEP (Remission of Duties or Taxes on Export Products) Scheme will replace MEIS (Merchandise Exports from India)
No Tax On Foreign Companies If No
Kochhar & Co.
Double tax avoidance agreements (tax treaties) made with various countries provide that business income of an enterprise which is a tax resident of a foreign country is taxable only if it has or is deemed to have a permanent establishment (PE)
Government Brings In Various Amendments To The GST Law
Nexdigm Private Limited
The government has notified several changes in the GST law and has also put into effect several amendments brought in vide the Finance Act, 2020. This alert covers the key changes notified in the GST law.
China Enforces Tax Collection On Employees Working For Chinese-invested Enterprises Overseas
DLA Piper
According to recent press articles, a number of overseas subsidiaries of Chinese state-owned enterprises (SoEs) have started to inform their Chinese expatriates...
Tax Issues In M&A Transactions
Nishith Desai Associates
The Indian Income Tax Act, 1961 ("ITA") contains several provisions that deal with the taxation of different categories of mergers and acquisitions.
Extension In Due Dates For Various Filings Under Income Tax And Goods And Services Tax (GST) For AY 2020-21 (FY 2019-20)
Nexdigm Private Limited
Considering the challenges faced due to the ongoing pandemic, as well as many parts of the country facing partial lockdown, the Finance Minister of India has provided relief to the business and professional fraternity by once again extending the various due dates for compliances.
FREE News Alerts
Sign Up for our free News Alerts - All the latest articles on your chosen topics condensed into a free bi-weekly email.
Register For News Alerts
Article Tags
Malaysia Tax Income Tax Tax Authorities Withholding Tax
Similar Articles
Powered by mondaq AI
MATCH
47%
A Guide To Labuan IBFC Labuan IBFC Inc
53%
The OECD's Conquest Of Domestic Tax Codes: Understanding The Costs And Consequences Of The BEPS Project Labuan IBFC Inc
53%
The OECD's Conquest Of Domestic Tax Codes: Understanding The Costs And Consequences Of The BEPS Project Labuan IBFC Inc
46%
GST Requirements In Malaysia: What Do You Need To Look Out For? TMF Group
51%
Discerning The Judicial Trend In Recent Tax Avoidance Cases Lee Hishammuddin Allen & Gledhill
Related Articles
IRB Dawn Raid – How To Deal With It SKRINE
Malaysia's New Digital Service Tax: Impacting Foreign Providers Dezan Shira & Associates
Extension Of Tax Exemption For Women Returning To Workforce Gazetted SKRINE
Malaysia Earnings Stripping Rules For Restriction On Deductibility Of Interest Duff and Phelps
Malaysia's Special Program For Voluntary Disclosure Duff and Phelps
Mondaq Webinars
Arbitration is Common and Civil
OBLIN Attorneys at Law LLP
Webinar Wien Austria
Data Ethics
Kromann Reumert
Webinar Copenhagen Denmark
More Webinars
Mondaq Advice Centres
Global
Trademarks in SAARC Countries
Global
Investment Immigration
More MACs
Upcoming Events
Mondaq Social Media