by Loyens & Loeff , Adrien Pierre , Charles Cahoua and Sandy Brumberg
Loyens & Loeff
To print this article, all you need is to be registered or login on Mondaq.com.

As 2021 draws to a close, the Luxembourg Financial Intelligence Unit published its annual report for 2020. This newsflash summarises the key findings.

As 2021 draws to a close, the Luxembourg Financial Intelligence Unit (CRF) has just published its 2020 annual report in French. Here below a summary of the key findings.

The CRF carried out significant strategic work in 2020. The main focus area was intended to improve its internal operational processes and the quality and relevance of the information received from professionals subject to the Luxembourg law of 12 November 2004 on the fight against money laundering and terrorist financing (the AML Law). This related to:

At an operational level, the CRF continued to invest in the analytical capacities of its teams specializing in:

The sustained cooperation between the Luxembourg Public Prosecutor and the CRF on large-scale money laundering cases which resulted in significant judicial seizures was also noted.

The CRF now has direct access to the following central registers:

Child pornography, infringements of intellectual property rights and suspicious transactions in virtual currencies were captured in 2019. Exchanges between the CRF and Europol now also focus on:

In addition to operational cooperation with Europol, the participation of the CRF in a public/ private partnership organized by this European agency ("The Europol Financial Intelligence Public Private Partnership" (EFIPPP)) must also be mentioned. The EFIPPP brings together representatives of the public sector, in particular financial intelligence, police and customs services, and the private sector, especially large banks, as well as representatives with "observer" status (European institutions or international organizations, academia, etc.). This group aims to strengthen the exchange between the public and private sectors on major AML/CFT issues.

The CRF took the initiative to co-chair, with a representative of Commerzbank, a program of work organized within the framework of EFIPPP on offenses related to the Covid-19 crisis. The following typological reports were established:

The CRF is empowered to instruct declarants to not perform transactions related to clients.

The total number of declarations received from traditional banks decreased slightly from 2635 in 2019 to 2503 in 2020.

Categories of primary offenses with the most significant growth

With respect to money laundering, the very sharp increase is mainly explained by a refinement of the internal classification of primary offenses by the CRF.

Corruption declarations continued to increase. The significant increase observed between 2018 and 2020 (from 82 to 210) can be explained by the negative press articles published in 2019 and 2020, as well as the the vigilance of declarants in relation to "money laundering" cases, where in addition to inconsistent transactional patterns and / or corporate structures, there was a link to the corruption offense.

The CRF once again welcomed the increased vigilance of professionals regarding suspicious supporting documents, including loan or consulting contracts for which the economic rationale was unclear.

The 2020 Annual Report includes the number of declarations by category: 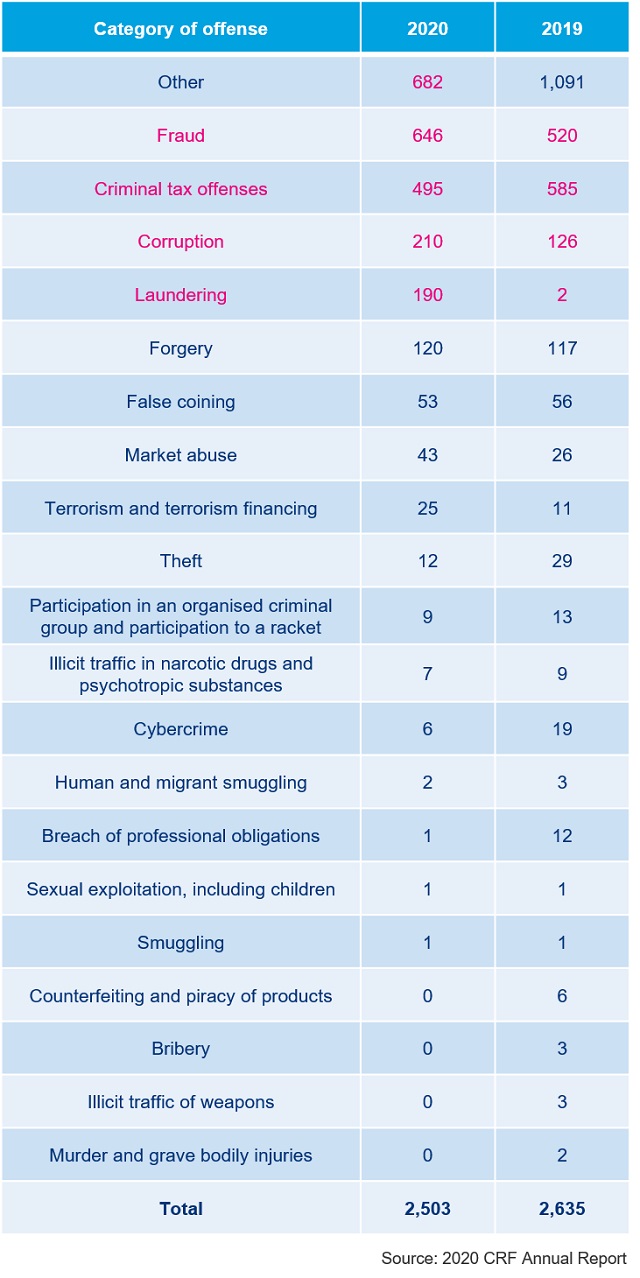 Virtual asset service providers (VASPs) have been added to the list of professionals subject to the AML Law. However, it should be noted that the CRF has received declarations from institutions active in virtual currencies since 2016. Two entities active in this field were licensed payment institutions.

The increase in the number of declarations classified as "other" (from 748 in 2019 to 5364 in 2020) is mainly due to the identification of suspicious transactions related to online marketplaces on the Darkweb declared by VASPs. They were able to set up transactions, executed by their customers, in connection with sales or acquisitions on illicit marketplaces without the products or services being appropriately identified. In other cases, the VASPs identified economically unclear transaction behaviours, such as the use of mixers or transactions carried out for the sole purpose of scrambling the origin of funds.

The decrease in the number of declarations related to fraud or counterfeiting could be explained by the optimization of the process declaration set up with online service providers. It is also necessary to report declarations relating to the sale of counterfeit or low-quality Covid-19 personal protective equipment.

Entities in the insurance sector which registered with the CRF's online "goAML" tool have continued to increase (82 in 2019 to 116 in 2020) as a result of an awareness campaign led by the insurance regulator, the CAA (Commissariat aux Assurances). 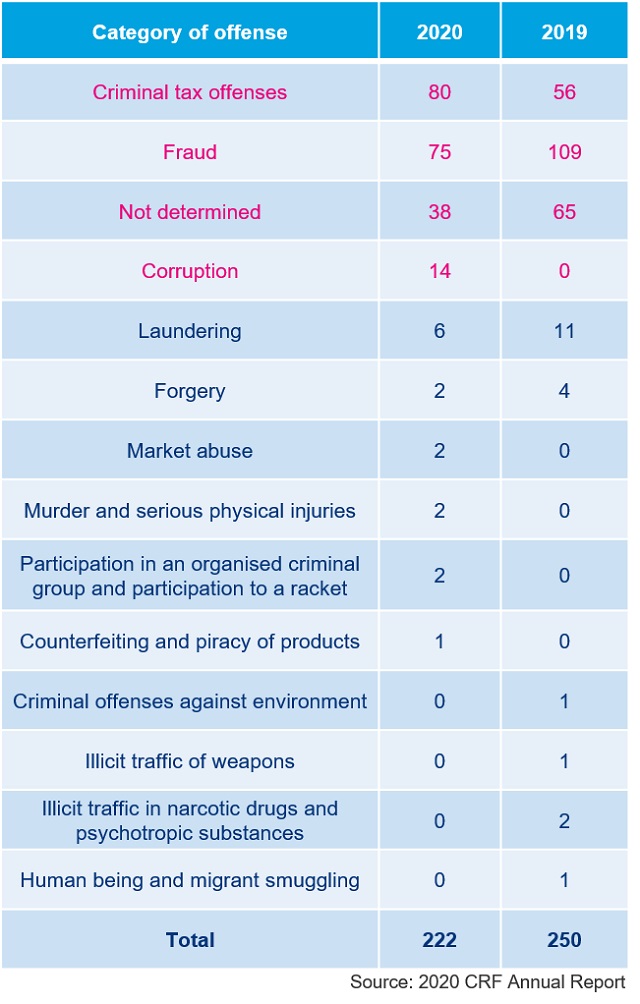 The CRF noted that criminal tax offenses are at the top of the list of primary reported offenses, which highlights sound awareness of this risk. To this end, the CRF referred to the list of indicators of money laundering in tax matters published by the Association of Insurance companies (ACA) dated 2 April 2020.

For 34 of the reports received in 2020 (out of 222), the CRF was unable to determine a precise primary offense because the report was too vague to qualify it If the circumstances giving rise to the suspicion concerned do not apply directly in one of the designated categories of offenses of the FATF, they are qualified internally under the denomination "not determined". These statements can cover a wide range of such situations:

Referral to the Prosecution

In 2020, 197 spontaneous reports (compared to 219 reports in 2019) were sent by the CRF to the relevant prosecution teams. The report does not provide insights as how many of those reports lead to successful prosecutions. The report does, however, provide examples of latest case law on legal issues (i.e. material element of the laundering or recourse against the blocking orders from the CRF).

There has been a decrease in the total number of reports, however, criminal tax offences and fraud remain areas where banks and insurers have reported the highest number of reports. Now that VASPs have been added to the list of professionals subject to the AML Law, the CRF maintains regular exchanges with the CSSF in order to identify the VASPs active in Luxembourg, which may not yet have complied with the registration requirement. This area will likely see more growth when the next year's report is published.

Read also our review of the 2019 report