The Petition for Writ of Certiorari filed by Jack Daniel's in the "Bad Spaniels" case is worth a read. [pdf  here]. The Appendix may be found  here. A response is due on or before September 16, 2022. 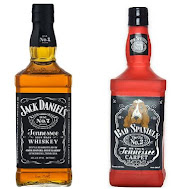 1. Whether humorous use of another's trademark as one's own on a commercial product is subject to the Lanham Act's traditional likelihood-of-confusion analysis, or instead receives heightened First Amendment protection from trademark-infringement claims.

2. Whether humorous use of another's mark as one's own on a commercial product is "noncommercial" under 15 U.S.C. § 1125(c)(3)(C), thus barring as a matter of law a claim of dilution by tarnishment under the Trademark Dilution Revision Act.

TTABlogger comment: Seems to me that the Ninth Circuit has gone way too far.