The key modifications affect the areas illustrated on the map below, and are as follows:

In addition to the modifications listed above, the City entered into a 22-item Points of Agreement, which includes a commitment to developing more affordable housing outside the SoHo/NoHo rezoning area (particularly on City-owned and federally-owned sites) and a framework for the Downtown SoHo/NoHo Arts Fund. 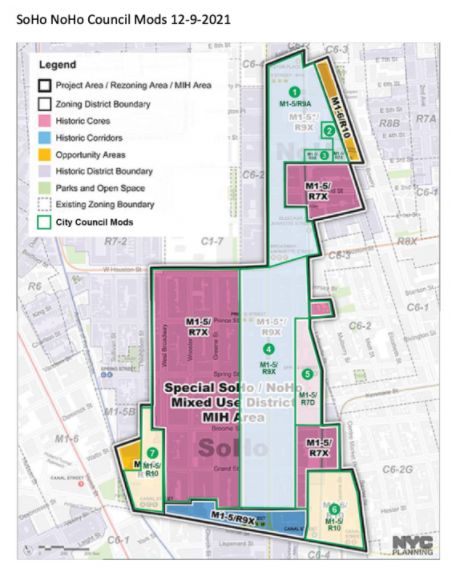 While the Mayor has the authority to veto a City Council land use decision, it is well known that Mayor de Blasio is in full support of this rezoning and will not veto the City Council's approval.

That said, there is strong opposition to the rezoning from certain groups, that may attempt to continue to battle the rezoning in the courts.

Previously, on December 9, the City Council's Subcommittee on Zoning and Franchises and Committee on Land Use voted to approve the SoHo rezoning, with modifications (to read about these hearings and modifications, click here).

On November 9, 2021 the City Council's Subcommittee on Zoning and Franchises held a public hearing on the SoHo/NoHo Rezoning (to read about the Subcommittee hearing, click here).

The Stroock Land Use, Zoning and Environmental Team will be diligently following this rezoning and we look forward to providing updates on land use and zoning actions during the next administration.