The Affordable Housing Linkage Fee (AHLF) schedule, adopted June 29, 2018, places a fee on certain new market-rate residential and commercial development projects to generate local funding for affordable housing. The AHLF is adjusted annually for inflation. The calculated adjustment effective July 1, 2021, is 3.6%, and the new fees are shown on the table below. The AHLF is payable at the time of building permit issuance. 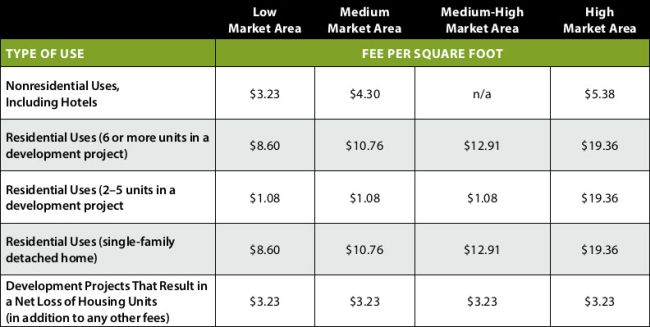 The AHLF Market Area Maps are attached to the Department of City Planning memo, dated June 3, 2021.

The court upheld an environmental impact report (EIR) for a wilderness recreation and preservation project in the Angeles National Forest in a challenge to the EIR's analysis of the project's reduced parking, alternatives analysis, and land use consistency analysis. The area of the proposed project is a popular recreational area, and its heavy use combined with the lack of facilities had resulted in degradation of the area. The project proposed enhancements, including new picnic areas, pedestrian trails, river access points, improvements to paved and unpaved roads, parking and restroom improvements, and vegetation restoration. Specifically, the project would reduce the available parking from approximately 417 designated and undesignated spots to 270 designated spots. The Watershed Conservation Authority (WCA) and Angeles National Forest prepared a joint environmental impact report/environmental impact statement (EIR/EIS) under CEQA and NEPA to evaluate the project's potential environmental impacts.

The petitioner brought a petition for writ of mandate challenging the WCA's certification of the EIR, arguing in part that the EIR did not adequately evaluate impacts to recreational resources because the project's reduced parking would reduce recreational access to the area. While the trial court granted the petition in part based on a discrepancy in the analysis of the parking, the court of appeal reversed and upheld the EIR. The court held that reductions in parking could lead to secondary environmental impacts, such as air quality impacts from drivers searching for parking. Yet those potential environmental impacts were very fact-specific to the circumstances in each case. Here, the reduction in parking might have an adverse social impact for those who must recreate elsewhere, but the reduction would prevent further adverse physical impacts on the environment. The court held that the EIR adequately disclosed the parking reduction and evaluated the physical impacts of displaced visitors who may seek other recreation opportunities across a large region. The court also rejected the petitioner's argument that the EIR should have evaluated more than the no-project alternative, holding that the petitioner failed to meet its burden to show evaluating only the project and the no-project alternative did not amount to a reasonable range of alternatives. The court also upheld the EIR's analysis of the project's consistency with applicable land use plans.

The court of appeal affirmed a trial court's decision to direct a county to set aside resolutions of necessity in which the county determined that a landfill project was categorically exempt from CEQA. The county argued that the petitioner failed to exhaust its available administrative remedies because the petitioner did not raise the argument that an exemption did not apply during the administrative proceedings. The court of appeal rejected this argument, reasoning that the county did not provide adequate notice that a CEQA exemption would be considered at the public hearing on the project, so the petitioner had no opportunity to raise an objection to the exemption. "In other words, the requisite opportunity is not provided when the public 'agency holds a hearing but does not provide adequate notice that a CEQA exemption will be considered.'" Adequate notice was not provided because the agenda request form for the hearing did not mention CEQA or any exemption, and the county could point to nothing in the record to show that the public was notified before the hearing of the county's possible reliance on CEQA exemptions. The court of appeal found that the first disclosure of the exemption occurred just before the close of the public portion of the hearing, and as a matter of law, this was not sufficient notice.

This case concerned special legislation enacted to facilitate the construction of a new baseball park and mixed-use development in Oakland, Assembly Bill 734. Some of the goals of AB 734 were to help the city retain a professional sports team, create jobs, and help implement sustainability measures designed to improve air quality. The petitioners contended that Governor Gavin Newsom did not have the authority to certify the project because his authority expired as of January 1, 2020. Their argument was based on an incorrect reading of Public Resources Code Section 21168.6.7(e)(2), which incorporated Assembly Bill 900. AB 900 included a deadline of January 1, 2020.

The trial court granted Newsom's motion for judgment on the pleadings, and the court of appeal affirmed. The court of appeal analyzed the legislative history of AB 734 to determine that the deadline referenced in AB 900 did not apply to AB 734 because the "petitioners' reading of the statute would undermine rather than promote the general purposes of the statute and the objectives to be achieved" because the reading would essentially make the special legislation a nullity.

The petitioners challenged a regional park district's approval of an agreement with a utility company that provided for removal of trees in close proximity to a natural gas line on district property. The real party in interest brought a demurrer, arguing that the complaint was barred by the statute of limitations. The petitioners argued that the statute of limitations had been tolled because they and the respondent had entered into a tolling agreement, which the real party did not consent to. The trial court sustained the demurrer without leave to amend, and the court of appeal affirmed. The court of appeal held that the real party was a necessary party to the tolling agreement and "was entitled to either assert or waive the statute of limitations defense to the amended petition/complaint." The court of appeal also rejected petitioners' argument that the limitations period did not begin until they had "constructive notice" that the project involved the removal of trees, reasoning that "'flaws in a project approval process' do not delay the limitations period normally applicable."

The court of appeal further held that a city's tree protection ordinance did not apply to the project because general state law granting resource management authority to regional park districts preempted the ordinance. Lastly, the court held that due process rights of notice and hearing related to the project were inapplicable because the district's acts were quasi-legislative, not quasi-judicial.

The court of appeal held that coastal development permits (CDPs) were deemed approved by operation of law under the Permit Streamlining Act (Gov. Code Section 65920, et seq.) after the California Coastal Commission failed to act on the permits within the required time limits. Owners of beachfront mobile homes in the City of San Clemente had received permits from the California Department of Housing and Community Development (HCD) to remodel their mobile homes, including adding second stories. After the homeowners completed the renovations, the Coastal Commission issued notices stating that the completed renovations were unauthorized and illegal without CDPs. To avoid substantial fines and civil penalties, the homeowners applied for "after-the-fact" permits for the renovations.

At the public hearing for the CDPs, the Coastal Commission's staff recommended approving the CDPs, but conditioning the approvals on limiting the heights of each home to 16 feet. That height limitation would have required demolishing and reconstructing the homes, which currently stood between 20 and 25 feet. Opposing those conditions, the homeowners offered to withdraw and resubmit their applications to allow for further discussions of alternatives to the staff's recommendations. The Coastal Commission voted to allow resubmission of the applications, denied a request to waive resubmittal fees, and took no further action on the applications.

The court of appeal upheld El Dorado County's adoption of a mitigated negative declaration (MND) under CEQA for a bridge replacement project, holding that the petitioners had not satisfied their burden to show that substantial evidence supported a fair argument of significant impacts related to emergency response. While the MND identified potential impacts of the project that could impair implementation or physically interfere with emergency response or evacuation plans, the MND identified mitigation measures to reduce that potential impact to a less than significant level, including the potential construction of a temporary evacuation route. Concerned the project would impact fire evacuation routes during construction, the petitioners brought a petition for writ of mandate arguing that the county should have prepared a full environmental impact report (EIR).

The trial court denied the petition, and the court of appeal affirmed. Rejecting the petitioners' arguments, the court held that the petitioners incorrectly framed the fair argument standard in terms of the project having "potentially significant impacts on resident safety and emergency evacuation." Yet instead, the relevant test was "whether the record contains substantial evidence that the project may have a significant effect on the environment or may exacerbate existing environmental hazards." The petitioners pointed to many public comments expressing concerns about the project's impacts to evacuation safety, relying on cases in which courts have held that lay testimony could constitute substantial evidence. The court rejected that argument, holding that lay testimony may constitute substantial evidence when personal observations and experiences directly relate to and inform a project's impacts. In contrast to lay testimony presented in other successful challenges, the court held that the comments in this case lacked factual foundation and failed to contradict the conclusions of the agencies with expertise in wildlife evacuations or call into question the underlying assumptions related to the project's potential environmental impacts.